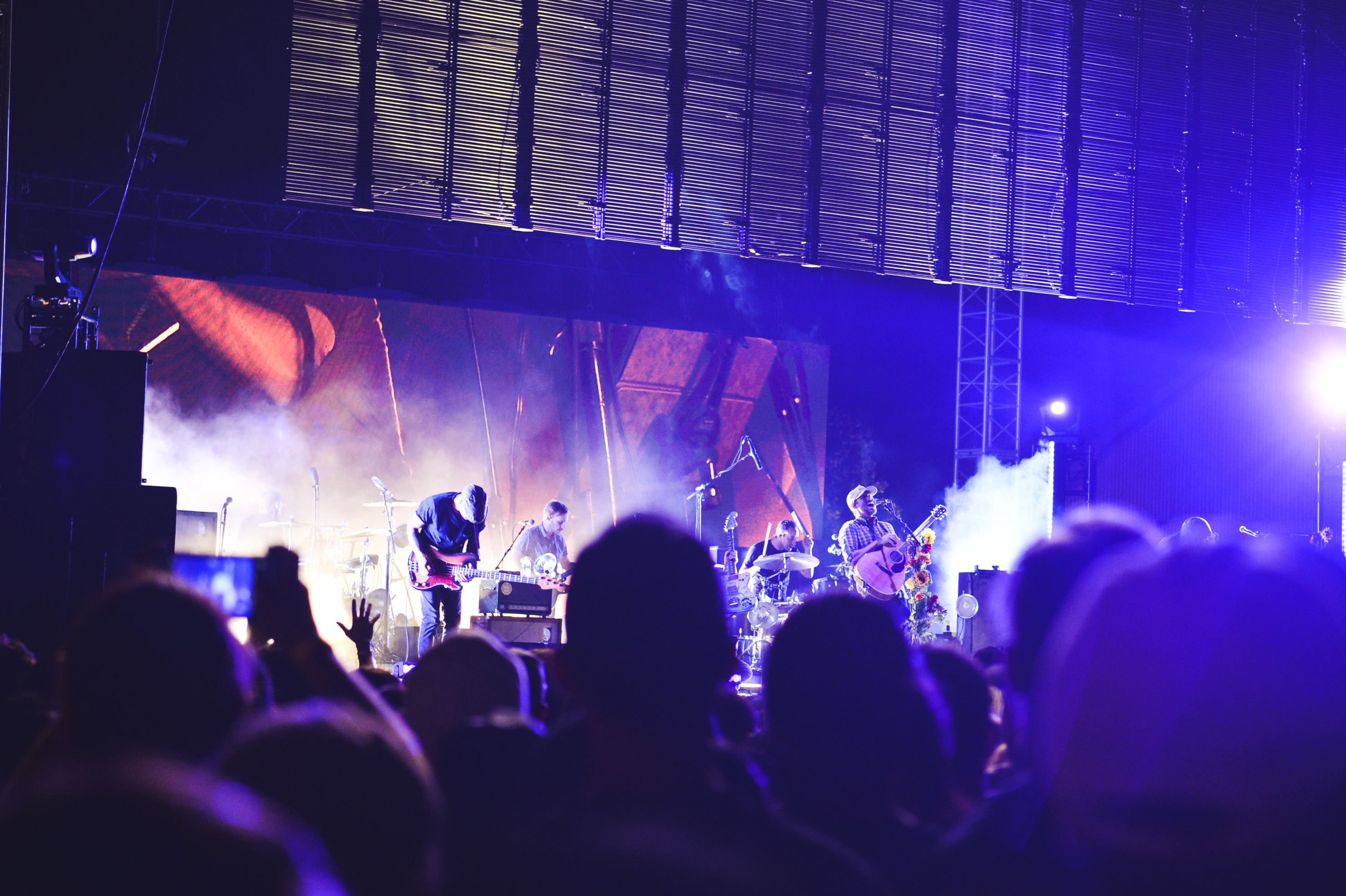 The doors opened at 1 pm and fans flooded the grounds. The National Orange Show Events Center was just the right size—not too much walking, but everything had enough space. The grounds sprawled from the cool air-conditioned indoor side stage, to the VIP area lit with hanging lights, to the fountain and grassy shaded area, to the huge main stage—with vendors and food all along the way.

Elder Brother‘s set on the side stage kicked off the fest. Their set had a nice flow, playing some songs off their album Heavy Head. Their passionate performance got the crowd warmed up and set the tone for the High & Low Festival.

Now, Now performed on the side stage and absolutely killed it. They played one of their new singles, “SGL,” as well as some unreleased singles, which will be officially released soon. They also rocked signature songs off their old albums. Fans were going crazy as “KC” Dalager’s hot pink hair thrashed into the air with every head bang and Bradley Hale pounded the drums. Given the crowds response, the new songs Now, Now played will be eagerly accepted as soon as they are released.

Fans squealed in excitement as (Sandy) Alex G walked onto the dimly lit side stage. Alex gave a sincere, thoughtful performance which loyal fans swayed and sang along to. One of his best was “Proud,” off his newly released album Rocket.

Coin‘s performance was energetic and fun, as usual. “Are We Alone?,” a fan favorite, had the crowd dancing and singing together. They sang more hits from their latest album, How Will You Know if You Never Try. Despite having only been out since April, High & Low fans knew every word.

Bad Suns kept the main stage crowd entertained with songs everyone could sing along to off of their debut album Language & Perspective, such as fan favorites “Cardiac Arrest” and “Transpose.”Bad Suns also performed songs off their newer album Disappear Here, released in 2016. The good mix of classics and currents ignited crowd enthusiasm and energy.

Citizen‘s Mat Kerekes clutched the microphone as he sang with such intensity that you could feel his passion from the back of the room. Ryland Oehlers shredded to his left, while brothers Nick and Eric Hamm and drummer Jake Duhaime had the crowd clapping their hands and singing their hearts out. Citizen played one of their new singles, “In The Middle Of It All,” which put the whole room under their spell. They also surprised the crowd with “Fever Days,” which has yet to be released but will be coming soon with the dropping of their new album in October.

Andrew McMahon kept the energy high during his set while he played a good mix of classics and new material. Some favorite throwbacks included Something Corporate‘s “I Woke Up In A Car” and Jack’s Mannequin’s “Dark Blue.” He even tossed out beach balls into the crowd for fans to pass around.

Best Coast got the crowd energized right away with a strong performance of their single, “The Only Place.” Fans screamed as Bethany Cosentino walked on stage to the microphone, dressed in a pale pink jumpsuit and hot pink sunglasses. Influenced by The Beatles and The Beach Boys, Best Coast set just the right vibe for this San Bernardino afternoon. The crowd, dancing under the hot California sun, sang in unison to the band’s signature electrifying tunes.

The second to last act on the main stage, Death Cab For Cutie had a drawn-out intro which built suspense before they came out bellowing their classic, “I Will Possess Your Heart.” They thanked fans for allowing them into their festival, to which the crowd responded with screams of praise. DCFC unified the crowd with their timeless songs, which fans sang along in unison to. The stage lighting furthered the dramatic chords and notes that they rocked on stage.

Everyone was waiting for Brand New. The New York alternative headliner started the set behind a metal gate with slits just big enough to slightly see inside. The fence extended from the bottom of the stage to the top, with lights on it that changed with the music. Brand New set off the night with “Lit Me Up” and a spectacular light show with flashing and changing colors on the metal veil in from of them. The lights changed from white flashing stripes to red triangles that looked like flames growing upwards from the ground. The intro flowed through “Lit Me Up” to “Gasoline” and then “You Won’t Know,” utilizing the mysterious gate and flashing lights. One of the most impressive sequences was the coordination between “Out of Mana” and the vertical orange stripes that lit up and moved around the stage in time with the dramatic sounds of the guitar. Brand New performed lots of music off of their newly released album Science Fiction, their first album in eight years, following Daisy.

Food trucks serving everything from teriyaki bowls to garlic fries accompanied the many drink and food stands, serving margaritas, pizza, burgers and funnel cakes. A few trucks that stood out were Street Kitchen, Go Beyond The Bowl, and Middle Feast.

High & Low Festival was presented by LA alternative rock radio station, 106.7 KROQ. Many businesses and vendors were in attendance, but a nonprofit organization that stood out was To Write Love On Her Arms.

This fest definitely succeeded in offering fans multiple top-notch artists, smooth set flows, and even an air-conditioned stage amidst the 90 degree San Bernardino weather. Games in the shaded grassy area, the VIP tent, countless vendors, and screams of joy at every performance proved the crowd was fully entertained until the end. The first of its kind, hopefully High & Low Fest will become an annual tradition.