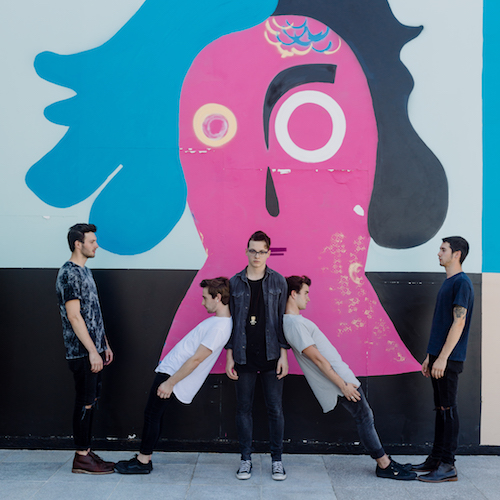 The Wrecks have exploded in popularity even with just one three-song EP currently out. Their number one hit, “Favorite Liar,” has reached almost 6.5 million listens on Spotify, was in the top 5 of SiriusXM’s Alt Nation Alt-18 countdown for almost 12 weeks, and was in the top 40 at Alternative Radio. Influenced by The Pixies, The Strokes, Weezer, and Vampire Weekend, the five-piece band blends indie, rock, and catchy choruses. They are about to headline their first tour, The Robot Army Tour, starting in California and going all across the US. Coming off their success supporting All Time Low in their tour, The Wrecks are extremely excited to be headlining for the first time. I spoke with The Wrecks singer Nick Anderson and he tells the hilarious and dramatic story of how their EP was recorded, what fans can expect from their tour (new music!) and the relatable story behind “Favorite Liar.”

What was it like supporting All Time Low? Did it give you a good taste of tour life?

The ATL tour had a remarkable impact on our outreach and growth as a band. Undoubtedly the largest crowds and stages we had ever seen on a tour, we were presented with the opportunity to introduce ourselves to many new faces. With every support tour/show that we do, we challenge ourselves to be the best support act of the night. Not that we want anyone else to do poorly, but we want to make our 25-30 minutes on stage as memorable as possible, and for us, it takes having somewhat of a competitive nature. Throughout the duration of this tour, we made sure to pay attention to what was working for us, and what wasn’t, which allowed us to grow as performers and strengthened our live show immensely. Luckily, ATL has such a receptive and welcoming crowd, so we were able to try things out that we normally wouldn’t.

You guys have made a ton of progress for being such a young band, how have you made your careers move so fast?

I have a burning impatience that doesn’t seem to go away – always working on or searching for ways to develop and further our band’s career. So, naturally, when our entire band was finally in the same room together for the first time, we went and recorded our first EP only a few days later – sneaking into a studio to do so. Co-produced by myself and Andrew D’Angelo, we put out the first single “Favorite Liar” a handful of months later. Jeff Regan, the program director at Alt Nation, started playing the track immediately on his Advanced Placement show, and Allison Hagendorf, the Global Head of Rock at Spotify, added the song to a bunch of her official playlists. We owe a lot of our early success to those two individuals who took a chance on a band that quite literally nobody knew. That single has done a lot of amazing things for us, and has opened the doors for many incredible opportunities. Our managers Richard and Stefanie Reines have, since day one, had a huge part in guiding the band and have taught me so much about how to navigate the music industry, and what it takes to build a band from the ground up.

When you’re on tour are you going to be playing a lot of new, unreleased music? Will those songs be on your upcoming EP?

Yes, we’re going to be playing our We Are The Wrecks EP, as well as all five songs off our upcoming release. So everyone coming to the shows will get a taste of what is to come.

What are you excited and nervous about for headlining your first tour?

I think our feelings of excitement and nervousness are all bottled up into the burning question of, “Who is out there?” By the time the tour is over, it will still be less than two years since we started the band, and we are constantly aware of how lucky we are to be in that position. Sure, we all had our own bands growing up and have plenty of experience playing bars and benefits to one person (the bartender), but having this project take off so suddenly is a dream come true. We are working very hard to make our live show the best show you can see for $12. That’s our goal as headliners.

What was the inspiration / story behind “Favorite Liar”?

“Favorite Liar” is a very true situation and story for me, as are all of our songs. I wrote it shortly after I had finally gotten over a break-up. It was written as a reminder not to look back at past relationships with rose-colored glasses. I think it’s easy to reminisce and miss someone for how good they made you feel, without recognizing why the relationship didn’t work out in the first place. The late night drives, the mornings you slept in together, the ironically cheesy Valentine’s day gifts – they’re just as important as the blow-out fights, the vicious cycle of shallow apologies, and the general toxicities that come with an unhealthy relationship. “Favorite Liar” is about coming to terms with that realization, and allowing it to set you free.

What was the recording process like for your debut EP, “We Are The Wrecks”?

A friend Facebook-messages Aaron and I.

She is house sitting for someone with a recording studio for one week.

We ask her if we can record our music there before the homeowner gets back.

We are a secret.

Andrew D’Angelo and I record the band from 5pm – 9am for 3 days.

Last day at the studio, we get a phone call.

Ex-wife of homeowner is on her way to the house.

Clean the studio, grab all our sh*t, leave.

In the clear, right?

Entire EP is still on the homeowner’s computer.

We didn’t have time to copy the files an external.

Andrew drives back at 2am the next night.

Sneaks through side gate into the studio.

Plugs in external and gets all our files.

We edit the sessions partly on laptops, partly on Andrew’s studio monitors.

Andrew and I spend 3 months trying to mix the songs in his bedroom.

One day, for some reason, they sound great.

Send them off for mastering.

What can fans expect from your upcoming EP?

All the songs on the upcoming EP have a lot of energy and translate really well live. I would say expect the same honesty in the lyrics, and excitement in the guitars.

What’s one thing fans can expect when they come to see you perform?

Like I said before, our goal is to give the crowd the best show they can see for $12. But if I’m being honest, my ultimate goal is to develop the best and most memorable live show that our fans have ever seen. One thing that we can absolutely guarantee, though, is that we will be giving 110% each and every night, and you won’t receive anything less than that at our shows.