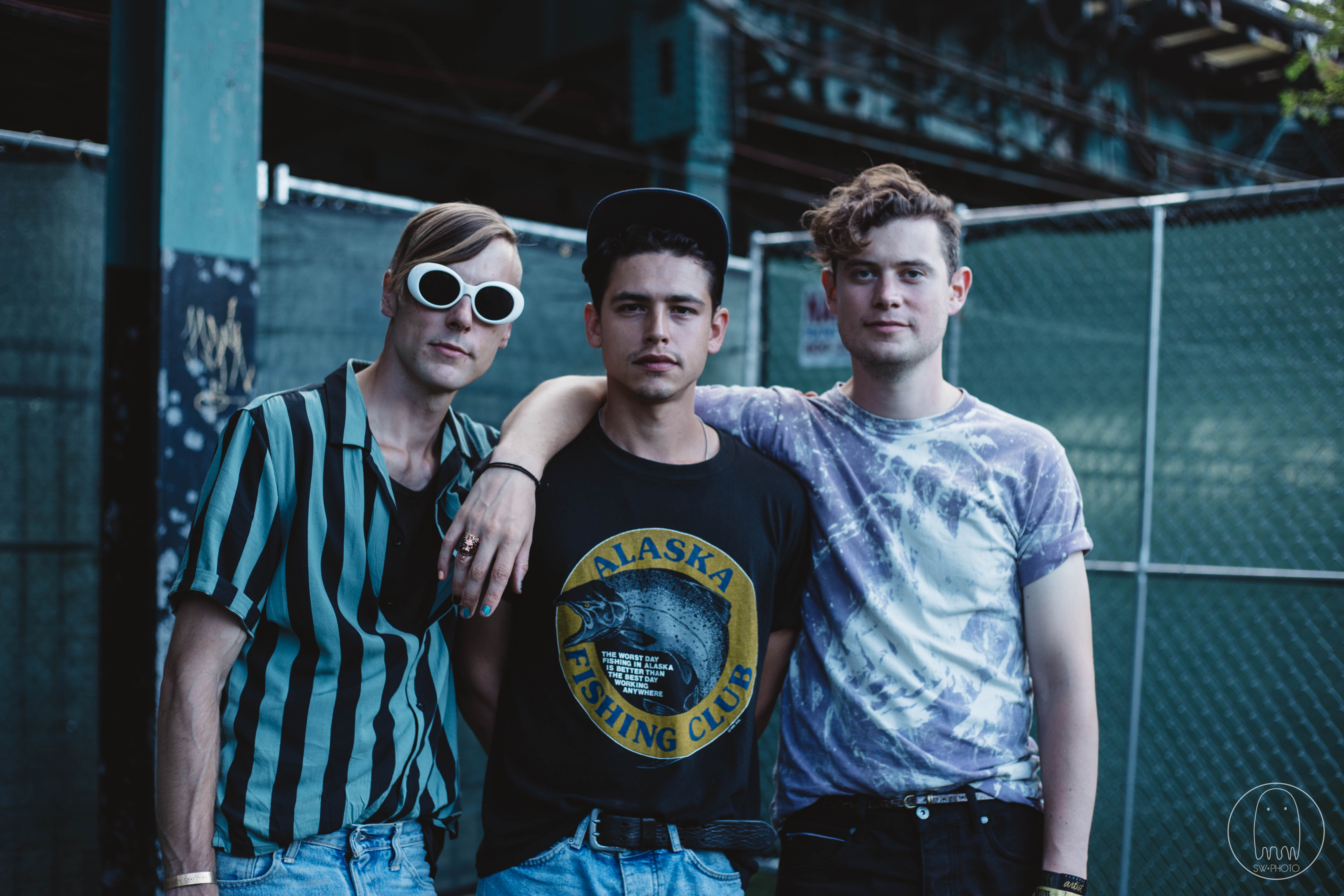 Last weekend, we got to catch cosmic rock trio DREAMERS at The Meadows Arts & Music Festival in Queens, New York. The band put out their debut album, This Album Does Not Exist last year, which features jams like “Sweet Disaster” and “Painkiller.” The Los Angeles based trio includes Nick Wold on vocals/guitar, Nelson on bass/vocals, and Jacob Wick on drums. Soundigest had the opportunity to sit down with bass player, Nelson, backstage at The Meadows to talk transcendence, touring, and experiences. Check out the interview below:

Tell us who DREAMERS are. What is DREAMERS all about?

DREAMERS is an indie/alt-rock band that consists of myself (Nelson), Nick, the guitar player and lead singer, and Jacob, who plays drums. We’re a collective. We’re trying to transcend the mundane realities and find something beautiful.

You describe your music as “cosmic rock,” according to your Facebook page. Can you talk about what that means?

It comes back to the idea of transcendence, not necessarily in the ’60s psychedelic way, but we’re dedicated to how music brings people together and how it enables people to shed the garbage that accumulates by going through the motions of life. We dedicate ourselves to do that– it’s why we do this. It’s why we love it. We played here today, and we always have an amazing time, and we hope that everyone else is having a great time. We see people have a great time and it becomes this thing–when music’s happening, it’s like nothing else is really happening. We love it. We’re just chasing it.

You put out your debut album This Album Does Not Exist last year. Can you talk about where that album name came from?

Part of it is the meta aspect of it saying the album doesn’t exist. It ties with a lot of things that we like in terms of art and culture. There’s this famous painting called This Pipe Does Not Exist, which is a painting of a pipe. These kinds of things played into it. It was also an inside joke for a while because we had been trying to release the record for a long time, but with that came various things along the way. We ended up releasing an EP, the record got delayed, and it turned into this whole joke of “what even is an album?” We already knew about the album, but no one else did, so it became a joke. It became playing with expectations, the meta, and of course it was a little silly.

You are going on tour with The Maine soon. That is so exciting! How did that come to be about?

The tour came about because a band that we toured with, The Mowgli’s, who we’re great friends with, were also touring with The Maine. We went to see a show and met everyone. That was the genesis of The Maine asking us to tour with them. Night Riots is also going to be on that tour, who we’ve played shows with and are also great friends with, so we’re looking forward to that a lot. It’s going to be a good tour.

So, could we possibly expect a collaboration with John O’ Callaghan on stage?

Maybe! It’s too early to tell, but anything can happen, and anything will happen.

With touring comes a lot of crazy experiences. Can you talk about one particular one?

Yeah, we have so many. The funny thing is, when everything is nuts on tour, we almost forget these things are crazy, and other people think they’re crazy, but to us it’s just another day on tour. We’ve had everything. We found a kitten at a gas station abandoned in an engine compartment of a car. We rescued it and had this kitten to take care of for two weeks in the van.

Did someone adopt it?

Yeah, we found her a home. We were sad to let her go because we loved having this kitten. We had a cardboard box for her, we were feeding her, we even had a litter box in the van. But, she needed a real home, and we found her a great one.

So many things have happened. We broke down about 100 feet from the Mexican border in the middle of the night. Border patrol rolled up asking us all these questions, and we were like, “We’re just a band! We’re just waiting for a tow!” It’s no kidding– these kind of things happen almost everyday where it becomes almost normal. We’ve had a ton of amazing experiences that way. Definitely a ton of breakdowns in weird places, late night strange places, ending up at someone’s house, a lot of those kind of things.

As part of our website, we love discovering new music. How do you discover new music?

Who are some of your favorite bands?

What is the best concert you ever attended?

Outside of our own? I mean, it’s weird, we have had shows we’ve done that we’re like,
“This is the best show ever!” And then with festivals like this, when we get to play a show and see so many great bands play as well. Best show I ever saw was Iggy and The Stooges. They played all of the Raw Power record. Iggy was in his 60s and he was still stage diving.

Nick talks about the best show he ever saw was Elliott Smith when he was very young. We all have so many of those.

Listen to This Album Does Not Exist here!

And, don’t forget to catch DREAMERS on tour with The Maine this fall. Dates and tickets available here!

One thought on “The Meadows: DREAMERS Talk Transcendence, Touring, and Experiences”