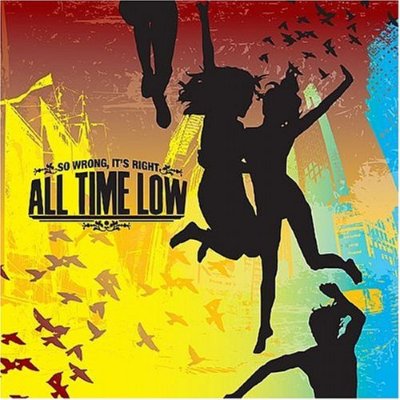 For All Time Low and their fan base, 2017 has been a whirlwind of a year including a new label, new album, new tours and more. Something very significant for ATL and their fan base is the fact that their second studio album, So Wrong, It’s Right, was released 10 years ago today!

A lot has happened in the last ten years for All Time Low– countless tours, increased fan base worldwide, six albums, new labels, television appearances and the list goes on and on.

So Wrong, It’s Right (or SWIR for short) was monumental for many reasons. This album kickstarted a lot for the band. Their biggest hit, “Dear Maria, Count Me In”, from the album went platinum in 2015. The second single from the album was all over the radio and the music video was played nonstop on MTV, especially on TRL. “Dear Maria” was ATL’s first single to reach the charts as well.

From being featured all over MTV to later performing on Jimmy Kimmel Live and being named band of the year by Alternative Press in 2008, I guess you could say ATL had a  successful start.

The album itself was a game changer for them, musically. Similar to their previous releases, this album was a long form version of catchy pop punk hits with highly relatable lyrics. It’s crazy to think that I could connect to these lyrics at 14 and then again at 24.

SWIR is filled with fan favorites like “Vegas” and “Six Feet Under The Stars;” songs that fans are nonstop begging the band to play live now, despite having well over 100 songs in their catalogue. Another fan favorite from SWIR is “Remembering Sunday.” The song is a ballad-esque acoustic number that features the help of Juliet Simms (ex-Automatic Loveletter). The album is filled with hits, maybe even some misses (*coughs*… “Come One, Come All”… it did grow on me in the last ten years, I swear!) and there’s definitely something for everyone on it.

All Time Low could have easily continued making music similar to SWIR, but luckily, they’ve changed up their sound a bit, matured in the process, and are even bigger and better than before. Sadly enough, many fans didn’t stick around in the ATL fan base after this album due to them changing up their style. No worries though, the band only got bigger and their fan base grew immensely in size. SWIR will always be around, whether it’s for nostalgic purposes or just to listen to everyday.

If you were lucky enough to snag tickets, ATL announced three SWIR anniversary shows at Starland Ballroom in New Jersey for this December. I’ll be at all three, probably crying my eyes out when they play my favorite song, “Stay Awake (Dreams Only Last for a Night).” Didn’t get tickets? No worries, the album isn’t going away anytime soon!

Happy ten years anniversary, So Wrong, It’s Right, from all of us here at Soundigest!

One thought on “Happy Anniversary, ‘So Wrong, It’s Right’”