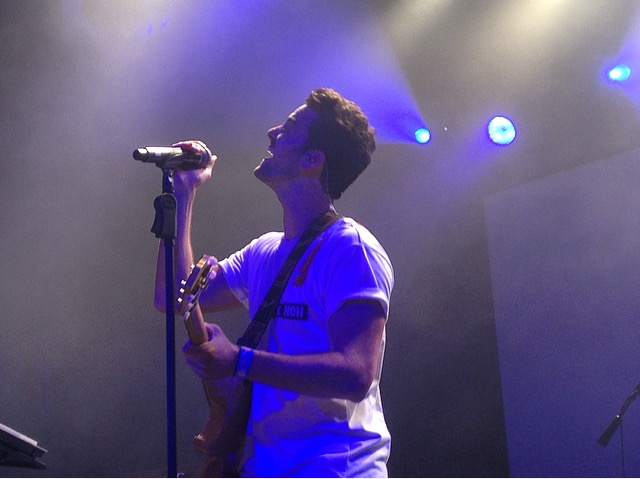 Last weekend, The Shadowboxers returned to Los Angeles as a stop on their nation-wide tour, this time to the El Rey Theatre. Adam Hoffman, Matt Lipkins, Scott Tyler, Cole McSween, and Carlos Enamorado make up the five-piece band that caught the public’s eye with their YouTube cover of Justin Timberlake’s song, “Pusher Love Girl.” The cover was so good that Justin himself reached out to The Shadowboxers and took them under his wing. Since then, they’ve recorded with Justin, have been working on new music, went on a tour, and their latest single “Hot Damn!” just dropped last Friday, soon to be followed by a full EP.

I was lucky enough to attend their concert in LA, where they played newly and unreleased singles, like “Hot Damn!” Their choreographed dance moves kept the stage in unison, and even though fans didn’t know the words to the unreleased music, their charisma and infectious energy had the whole floor dancing and waving their arms. Their music is catchy, but it was their stage presence that really made the band stand out. They describe the direction of their new music as verging into modern R&B, older influences, and a touch, of course, of some pop inspirations from Timberlake.

With their in-sync dance moves, the guys’ stage swagger would’ve made JT proud.  I spoke with band founders and friends since college, Adam, Matt, and Scott, about working with Justin Timberlake, their new releases this year, new music to come, and the secret to staying tight-knit. Check it out!

Alright, so a little bit of your back story, let’s talk about your beginnings with JT.

Scott: So, we weren’t putting out any original music at the time, and we wanted to find a way to just reach our fans. So we said, let’s do a YouTube cover series. We wanted to be very intentional about not picking just the top 40 song of the day, so we would pick older songs, some current songs, just ones that we liked, that all three of us loved, and one of those was “Pusher Love Girl.” So, we recorded it just like we did ten other ones and posted it online and put it on YouTube and somehow he saw it, we still don’t know how.

Really? He never told you?

Scott: We asked him and he said that it just showed up in [his] inbox. Like, we tweeted him, like you do. Like hey, Justin, we think you’ll dig this.

Adam: Yeah, but he like tweeted about it and really praised our cover of it and then sent us a direct message on Twitter.

Matt: He slipped it in the DMs.

Wow, did you think that it was fake?

Scott: Yeah, I was terrified!

Adam: No, no it looked very real. He was like, ‘I’ve never done this, like how do I get in touch with you?’ So we gave him our phone number and about a week later he just called us and talked for like an hour and he just kind of wanted to know our story and what we were doing, and then about a week after that he was playing in Atlanta, where we were living, and [he] took us out to dinner and that was that.

Matt: Yeah, and right there like at that first meeting he already had somewhat of an idea of how he wanted to help and why he was getting in touch. Not just to say, ‘Hey you guys are great.’ I mean, he wanted to collaborate with us creatively.

There is just something special in your cover that he saw, and that’s really cool.

Adam: Yeah, and it’s been pretty cool too as the process has unfolded. He’s been very adamant about letting us just do what we do.

Scott: Yeah, ‘cause that’s what he was drawn to.

Adam: He only wants to help enhance in whatever way he can. It’s never been like, ‘Alright now we need to completely rework the sound.’

Scott: So he was actually on tour at the time, so we would write songs and email them to him and he would give us feedback. And then he had a kid, so that was right after his tour, so that was probably a year and a half, two years of him traveling around and we would just write and play shows—grassroots building our fan base. But in the meantime, we’re sending him songs and getting feedback and aiming towards studio time, which we finally got this past summer. We were in New York at The Loft, which was a side room of Jungle City, and for about two and a half weeks he came nearly everyday.

Scott: It was great because we’ve gotten to record with him before this session, but I think the coolest thing is that he just lets us do what we do. He’s very creative and he kind of hangs his celebrity at the door when he walks in, and it’s just the three of us and him and our other producer, K-Kov. Everyone was just being creative together.

Adam: It didn’t feel like we had some kind of coach on high.

Matt: It was just a musician from Memphis in the room.

So, what about the band name? I read a little bit about it but how did it come about in your own words?

Scott: We were in college playing shows as “Matt, Scott and Adam.”

Matt: It didn’t last. It lasted for like 4 gigs.

Scott: We needed to like come up with a name so we kind of sat together and thought about all the things that we cared about musically and what we a shared. And when we thought about all of this we just started writing things down, names down, and we just hit “Shadowboxers,” and we loved it! It just spoke to us. It represents preparation, you know, it’s a fighter preparing for a fight. Literally like a boxer hitting his shadow. It’s kind of an old connotation of an old fighter, which is sort of a romanticized image in our heads. It’s also you against you, which we liked because we are always trying to make ourselves better. We are always striving to be as good musically as we can be. Before we even care about who is listening we really put in the work on self-practice and that challenges all of us to be better.

Adam: It also turned out to be an appropriate name as we started working because we toured for 3 plus years before we ever got into a studio, and we really put in our time on the road. We were the backing band and opener for the Indigo Girls for almost two years and we learned how to put on a show.

Matt: It was a lot of winning over audiences every night.

Scott: Plus, shadowboxing is kind of a fun, playful thing to sort of try and catch a shadow.

What about “Woman through the Wall?” Where did the story for that come from?

Matt: That’s a song that we wrote with our friend Gabe Simon, who was formally of Kopecky family band, now he’s doing his own thing. [He] really counts as a songwriter and we walked into the room with him and I think we walked around the block first, he was just about to have a kid, and we were trying to figure out what kind of song we wanted to write and he came up with this line, “She’s got 17 pairs of Jimmy Choos and another two on the way.” And from there we were like, ‘Okay, let’s built this character.’ And the whole songwriting session we were like, do we sound like stalkers? How can we swing this so this isn’t creepy! Alright, let’s make it sort of a groove song. Cool, creepy—we can pull that off [laughing].

Scott: And that was the first song that we had released in a long time so we were like, is this the statement that we want to make? Like, we’re finally back with some new music and like we’re just like putting our ear up to the door. But, we’re cool with it.

So, you guys have been together for a long time and have been friends since college. You’re all the original founders of The Shadowboxers. What have you learned from each other and what keeps you close-knit?

Adam: Can’t put each other in a box.

Matt: We all have to keep surprising each other, or else. Literally, it’s like we are married. Like the same things apply and we have to just keep making sure that we check ourselves and know that everyone here is capable of doing something and growing.

Adam: Also, I think it’s surprising to other people when they see us work. We’re brutally honest with each other, to the point where people are like—

Scott: Like, ‘Oh my god, you just said that to him!?’ And the other two guys are like, ‘Yeah, it sucks, he needs to do it again, like I don’t understand why you’re upset.’ We’ve just been doing it for a long time and now it feels so new and exciting which is reinvigorating us, but that work that we’ve done before allows us to be presented with a new project and treat it with so much past experience that it’s like another thing that we’re going to tackle, like we’ve done a million times before. I think it’s giving us a lot of confidence the fact that we know each other so well. Like the stakes are higher but the method’s going to be the same. We’re never going to not be honest with each other. We’re never going to not want to push each other to get something better.