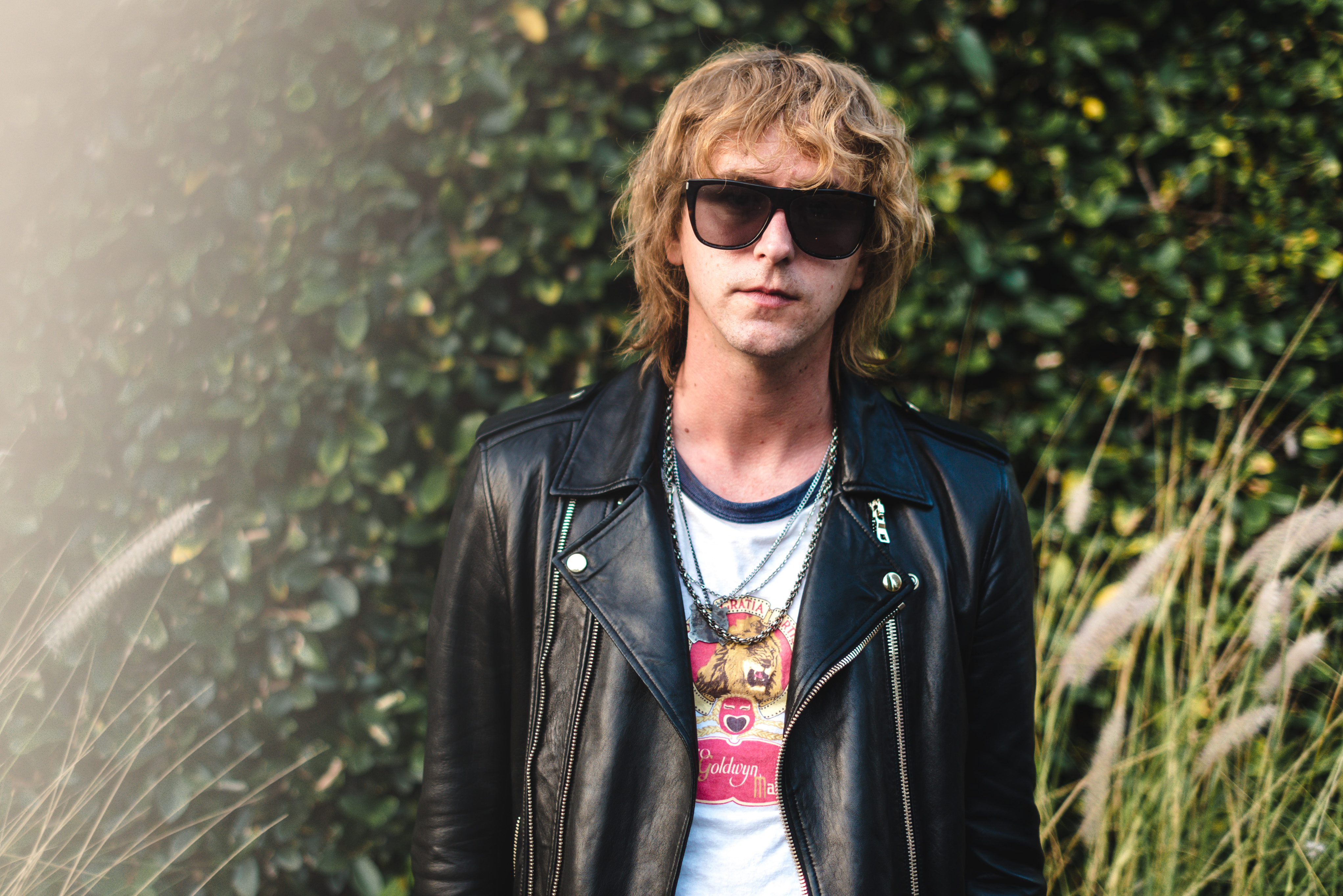 We sat down with rockstar DAVIS and talked to him about his new, reflective single “Hello,” which he says is about him no longer recognizing himself and wanting to change for the better. In the music video, the wolf seen in the mirror represents the distorted way DAVIS saw himself and how he knew it was time to turn over a new leaf. Raw, honest lyrics amidst a traditional rock-and-roll vibe created “Hello,” and DAVIS has lots more magic coming out soon. We talked about his EP, which he recorded with OneRepublic’s Brent Kutzle in a makeshift studio in an RV, as he relived stories of creating music while traveling across the US. DAVIS also teases his soon-to-be released singles, and gave details about his latest release, “Los Angeles.”

Let’s talk about “Hello” and where the inspiration for that song came from.

That song in particular, as far as the writing, it was written kind of in a dark period in my life. I was just kind of going through a lot, broke, going out too much. I didn’t really like the person that I was or that I’d become, and I started lashing out at the world and people around me that really cared about me and still care about me. I was kind of not happy with the person I was, and as a songwriter the only thing I can do in those situations is to write about it. I was writing a bunch of material at the time to try to express how I was feeling, and then “Hello” came out of the blue. I woke up one morning and looked in the mirror, and you know when you look in the mirror it’s like reflecting you to yourself, literally and figuratively, and I really didn’t recognize myself and luckily I had a guitar nearby and strung a chord and start singing the first things that came to mind, and “Hello” came out of that. It was cool, like a cathartic experience. You’re lucky to get a song that’s out of true emotion and true experience. That’s always where the magic happens. That’s why I write songs, for those kinds of moments. So when I finished writing “Hello,” in my bedroom, it felt good to finally express it and get it out and I immediately went to my laptop and demoed it and I was like, I feel like I have something special here. I’m feeling it, and it feels honest, and it’s finally saying something new that I haven’t said before, which is always the hardest thing. I try to write everyday and not everything I write is good, but it has to be real—it has to be from the gut. The good ones are that; they’re always from the gut, and they usually don’t take too long to finish. “Hello” was written in about ten minutes, but not every song is that lucky. It was a great feeling to finish that. I learned not only as a songwriter, I learned about myself.

So was it a part in the healing process? Do you feel like now that it’s out, you really are starting over?

Yeah. Really, there’s a line in the song like, ‘I need another chance at a first impression,’ and it wasn’t until I finished the song that I was listening back objectively at the lyrics and everything, and it kind of opened up a new chapter in my life. Thinking about myself, moving forward, so I kind of changed my lifestyle a little bit. Musically it ignited a new direction to explore things. There are things in “Hello,” musically, that I’ve never done before, and that always leads to other songs. With songwriting, it always has to be honest, but for me to be excited as well it has to open up a new musical territory. So, “Hello” was inspired by some of my favorite bands that I’d never brought into my sound, like ‘90s stuff, Nirvana, some of my favorite bands, and I was really excited to finally write this kind of song that went that direction.

Do you think this is kind of indicative of a new direction for your music?

Yeah, as far as personal songs I try to make sure everything I write is personal on some level. But I did touch into this more reflective part of myself and it definitely opened up a new door. Like once we recorded “Hello,” I got all of these ideas. Like, we could go this direction, or we could do this. Like, the gears start going as soon as you finish a song. “Hello” is probably like the most raw song I’ve put out so far, and that’s really cool because it’s a hard thing to do. You can always crank the guitars up. But hopefully it [“Hello”] connects on some level.

What about recording your EP? First of all working with such an acclaimed producer, and also traveling around the country in a makeshift RV studio!

I’ve known Brent [Kutzle] for years prior, he was in my band back in the day. And then Brent joined OneRepublic and they took off and did their thing, and it’s been like at least five years and I bumped into him at the Roosevelt, of all places. He was doing a gig there. And I was like, ‘Hey, I’ve got this demo, and we’re old friends, let’s catch up!’ So we started working on demos together, he got excited, and he was like, ‘Why don’t we get in this RV and I’ll put all the gear in, and we’ll make a little makeshift studio, and I’ll bring my dog and we’ll work out the kinks and record it.’ So, literally like the bathroom in the RV was the vocal booth, and we had a mic set up, and like a little soundproofing. At one point we were outside of San Francisco; we were in downtown Portland visiting the city getting coffee or whatever, and we’d jump on guitars and stuff and record. One time we were in Utah and we tracked outside, ‘cause it was so beautiful out there. We went out to go camping and we set up the stuff outside so we recorded outside, kind of a DIY situation [laughing]. Basically all the no’s, we did everything you’re technically not supposed to do in a recording studio. We broke all the rules. But I learned a lot because Brent’s position as a producer is to catch those moments find that magic, and there’s something rock-and-roll about that. Like yeah, we broke the rules, but doesn’t it sound good? We drove the RV out to Denver, Colorado. We stayed out there for about a month, where we recorded in an actual studio. So that was cool because of the juxtaposition. One time we turned the showers on and the guitars got wet but luckily there was no permanent damage. We had the vocal booth in the shower and all the guitars propped up in there and one of the guitars hit the nozzle, which was all good, ‘cause the generator was off. And then someone was like, ‘Let’s do some mixing, turn the generator on’—so that happened [laughing]. Like a guitar from the ‘50s [got wet]! But once it dried out, it still worked. I feel like that was Brent’s vision all along, and it allowed me to be comfortable and take risks. Sometimes I can get it in my own head and be too conservative about ideas, so that environment helped me not be boxed in as a rock artist.

Do you think you’ll want to record like that again in the future?

Yeah, definitely. After that experience I really learned to love unorthodox approaches. That kind of juxtaposition is really exciting to me because it means that at any time I get an idea, I can lay it down, and it could be the one—it could be the final mix.

What about your most recent single, “Los Angeles?”

That song is different from “Hello.” I try to be objective and curate my own songs so even though the next single [“Los Angeles”] is very different from “Hello,” I feel like if people liked “Hello” they’re definitely going to like this single, too. I write every single day, so after this phone call I’m gonna fire up my guitar, grab my laptop, and start writing again! We have quite a few songs ready to go. I kind of like releasing one song at a time and taking people on a journey and surprising people. I like to be surprised, as a writer, and I like surprising listeners. I love every different style of music. I’m a rock artist, but rock is so deep. There are so many styles of rock, and to me it’s like a playground.

Final word to your fans?
You are welcome, come with me, come on this journey! It’s gonna be fun. It’s gonna be rad. I can’t predict where it’s going but you’ll be glad you got there [laughing]. I don’t know exactly what you just saw or just heard, but you will be happy with it.