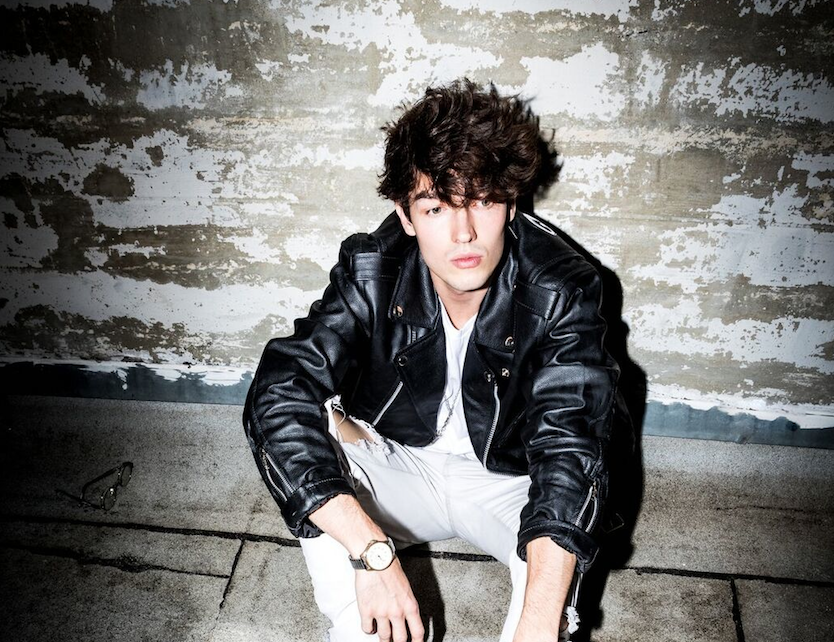 Soundigest recently had the opportunity to chat with Eyelid Kid all about his upcoming album sophomøre, his fashion line, and more! Check out our interview with the talented singer below as well as the Spotify link at the end of this interview to stream his new single, “rosegøld.”  Alternatively, you can purchase it here on iTunes.

You just released your new single, “Rosegøld,” from your upcoming new album, Sophomøre in 2018. Tell us a little about the song and what it means to you.

“rosegøld” came pretty naturally by experimenting in the studio. The rhythm and melody seemed to drive the song, so it didn’t feel necessary to flood it with lyrics but I think the low vocal chorus is able to provoke a lot of emotion without saying too much. All in all, it became a sound that was entirely new to me, so I think I hold a special place for it.

The single’s album art features Tyler Posey, of “Teen Wolf” fame, Sophia Taylor Ali, from MTV’s “Faking It”, as well as your girlfriend, Violett Beane. How did the collaboration for the artwork come about. What was it like working with Tyler and Sophia?

The four of us have been hanging out all summer and I’ve wanted to do a crew shoot for a while, so it came together pretty naturally! Although I produce the music solo, I never feel like Eyelid Kid is a solo project. The people that I get close to always seem to influence the direction of the project. Tyler and Soaps were a dream to work with, along with photographer Storm Santos and stylist Caitlin Eucker. It honestly felt like we were all just kickin’ it on a roof with good lighting and dope clothes!

You’re set to release your new album next year.  Do you have any secrets you can spill on a possible tracklist?

You released your debut album, Hometown, last year.  Can you describe the difference in the creative process making that album versus your upcoming album?

I think the change of environment from Austin to LA has impacted the creative process and given a taste of new inspiration. However, I do think a listener will be able to make a lot of connections from my upcoming LP to Hometown.

You also have a clothing line, the EK Fashion Line.  Tell us a little bit about the inspiration behind the designs for this line and what they mean to you.

The EK fashion Line works as a visual creative outlet, however, it feels cohesive with the music in the sense that I pull from the same emotional well to create the content. I often have visions of what I’d personally want to wear and then I just work on recreating them.

Speaking of fashion, how do you feel fashion plays a role in your life as a musician?

Fashion plays a huge role in my life. I think it represents my style and who I am. These days art itself seems more focused on style than anything else.

How did you come up with the stage name Eyelid Kid? Did you go through a process of coming up with several ideas for a stage name and narrowing it down to this one, or was Eyelid Kid something you had had in mind from the beginning?

Just out of high school I was in a band named Brotherhood Electric and Eyelid Kid became my stage name. It originated from a title I came up with for a short film I was involved with at the time but after making the decision to use it as my personal music alias, I changed the name of the film.

You have coined the term “frosted pop” as the genre that bests describes your music.  How would you explain that term to someone who may not be familiar with your music?

I’ve described it in several different ways, but genre-wise, I think it’s a unique blend of hip-hop influenced electro-pop. If Frosting Pop was a color, it would be a pastel hue of pink and blue.

I’ll be playing in Austin, TX next weekend but I plan on having several LA showcases lined up for 2018!

Would you like to add anything that we may not have touched on?

Thank you for your time and energy spent on giving artists an outlet! xx – EK