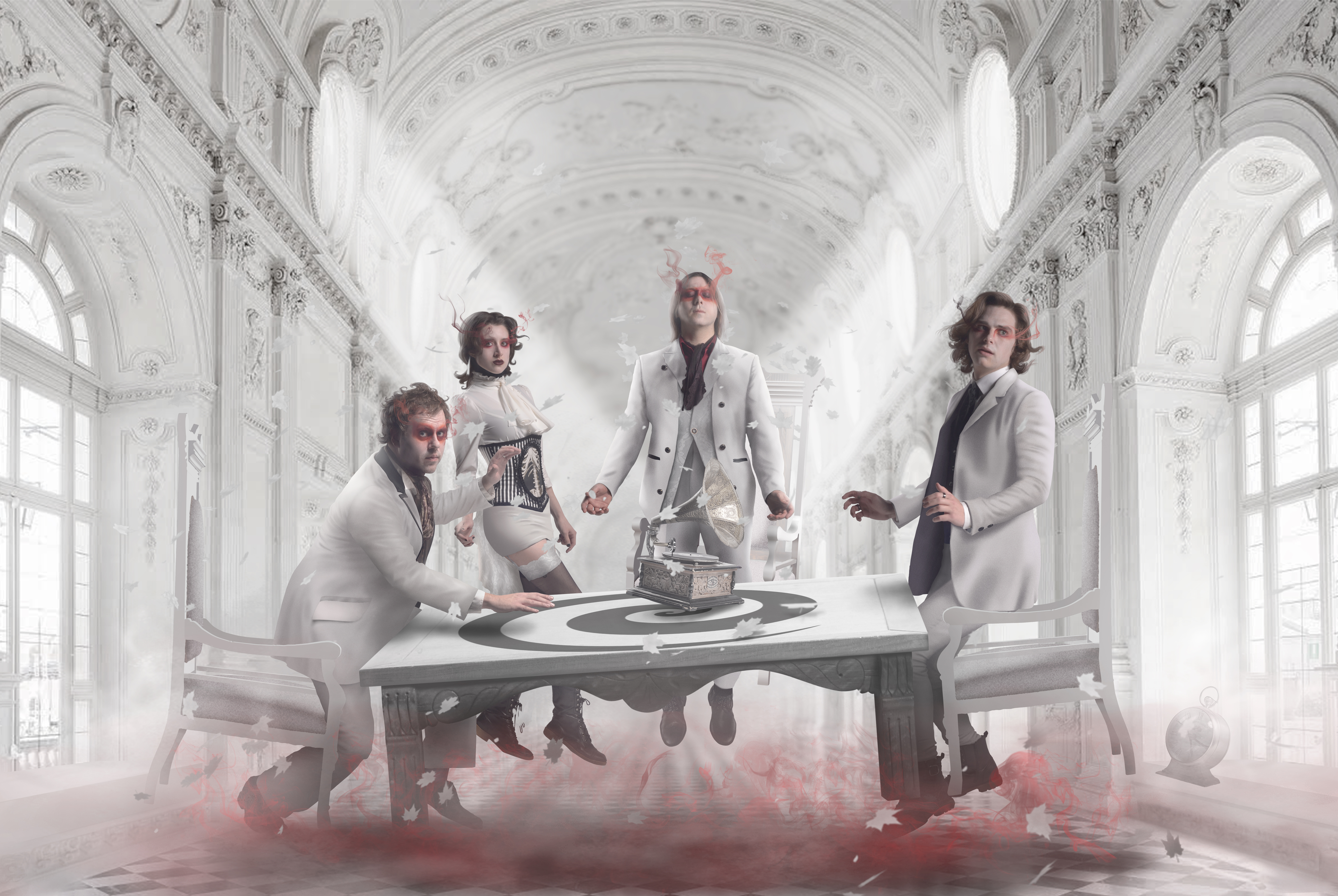 Be taken on an imaginative journey with Marquis of Vaudeville by listening to their new album set to come out on October 31st! Mixing punk and cabaret style sounds with a theatrical flair, the group just recently released their newest single “The Dreaming.” We got to talk to Marquis of Vaudeville about their new album “The Tragic Valentine,” their upcoming shows, and what fans can look out for next!

What things would you say inspire your sound?

We find influence in all sorts of varied sources: dreams, art, literature, film, theatre; typically, indie, cult, fantasy/sci-fi, classic works, the fantastical, the out-of-the-ordinary, as well as the cosmos, love, liberty, mythology, mysticism, mystery and magic. A great many of our influences can be dark yet playful because that’s a bit of who we are.

How would you describe the differences in this album from your previous work?

Although we’ve had punk elements in some of our previous work, this album is more sophisticated, yet at the same time, it has a more punk feel to it. In comparing our previous album, The Great Promenade of Fools & Ghosts, each song stood alone, but our new album, ‘The Tragic Valentine,’ is essentially a tragic love story told through 13 tracks. We took our musical theatrics to new heights with this one. Flecked with elements of mystery, magic, intrigue and revolution, the album’s story is somewhat our own lovelorn fantasy akin to Romeo and Juliet. Although the songs, as a whole, have an underlying theme which lays the framework of the story, the lyrics were written in a precise way to create duality and instill each song with its own identity & individual meaning as well.

Some of your earlier tracks have made an appearance on a few television shows and short films, how does it feel to hear your music on TV?

It’s exciting, and can be surreal at times, especially when seeing the song in the context it was selected for within the film/tv show. For instance, in Dexter, our epic rock-anthem, an ode to “Imagination” and Willy Wonka called “Kismet,” was used in a strip club fight scene – an immensely different context to the intended meaning of the song, but we found it a humorous one. Same thing goes for our other placements, like Charmed and the feature film Trust Me. In Trust Me, our song “Corps of Night” was used in a very uncomfortable scene, but it was an intense and important scene for the film, so it worked being that “Corps of Night” is an intense song. It’s always interesting to see a music supervisor’s vision and how the music is used in so many varied ways to highlight different scenes.

What are you guys favorite tracks on the new album? What kind of feel can the fans look forward to?

We love them all and put just as much energy, emotion and imagination into each. We like to tell stories and music affords us a way to tell them. We want to give people something to daydream about, give them hope, open their eyes, hearts and minds, and we’ve found that messages can be more profound and persuasive when woven secretly within the melodies of music. That’s why the songs are quite often wrapped up within and somewhat veiled behind an imagined story dealing with some sort of fantastical idea, such as discovering other worlds and alternate universes, Neil Gaiman’s The Sandman, vampire lovers, vengeful stage magicians, mysterious whimsical circuses, plundering gentleman highwaymen, intriguing labyrinthine understreets, mad scientist toymakers, or the anthropomorphic personification of death. As mentioned, dark, yet playful. However, one of the stand out tracks for us at the moment is the single, “We’re All Mad Here,”– an Alice in Wonderland-themed song on the surface about spiraling downward and out of control. The song presents a glimpse of mental illness and losing one’s mind while touching on being lost, but not alone, as everyone is a little crazy in their own way. We released an amazing video for the song on Oct 2nd, and are immensely proud of the video as we conceived, produced, directed and edited it 100% independently.

The album cover is super cool, how did you come up with the concept of the hourglass?

Thank you, we love it. The hourglass symbol ties into the story as it represents love/loss, life/death, light/dark and the fleeting nature of existence – all things relative to anyone’s life.

Where did the theme of The Tragic Valentine stem from?  Is it personal to one of you or a mixture of the sorts?

It came from one of the songs on the album called My Tragic Valentine, which was written about a personal experience. The song is about star-crossed lovers and their budding romance. Nothing can go wrong in the short moments they have with one another, but nothing seems to go right in order to make their desired life together a reality – a tale of love in the face of overwhelming odds, defiant of all obstacles. From there, this incredible story developed. Our songs tend to touch on recurring themes revolving around dreams, rebellion, love, loss, hope, understanding, oppression, outcasts, isolation, mental illness, the internal struggle, perseverance, self-destruction, death, loneliness, self-acceptance, sometimes drawn from personal experience, and other times written from another’s perspective.

You guys play at a lot of festivals and conventions, what aspects of playing at events such as these do you guys enjoy?

The energy and the people – especially at pop culture conventions when seeing all the characters and costumes that people have labored over creating themselves simply in celebration of a book, a comic, a movie, a cartoon, or music that makes them happy, no matter how obscure that thing might be. There is something immensely beautiful about the freedom for everyone to be whatever and whoever they wish to be.

I know your fans also love your extravagant shows, what can fans look forward to for Unlucky13?

Some of same elements one can find within our songs, such as mystery and magic. At a Marquis of Vaudeville show, you can expect to step into an elaborately decorated venue and witness a spectacle of variety acts in true Vaudeville fashion. We expect to create a certain sense of grandiosity for our attendees, so we decorate each venue with props and other adornment for a more accessible escape from reality. Then we encourage our patrons to dress as extravagantly and expressively as they will. Unlucky 13 is our big middle finger to bad luck. It’s a chance for our fans to do all the careless, calamitous things they always wished they could do without consequence, yet were too afraid of the returning wake. Each attendee will defy superstition and haphazardly throw caution to the wind by walking under ladders, opening umbrellas indoors, and breaking mirrors. The thought behind this event is to collectively generate so much bad luck defying superstition that we convert it to good. After all, the world is in such an awfully unfortunate state, what could it hurt? Here’s a bit of a taste of what one might see:

What can someone expect when seeing a performance from you all?

Heart, and a lot of it. We give every performance everything we have. We strive to make our performances more of an experience than a mere show. The songs have a lot of energy, and although they might have a creepy vibe like the work of Tim Burton, they’re also playful and fun so the fans really get into what we’re doing. Other than jumping up and down, or head banging, you don’t see a lot of people dancing at rock shows anymore, but at our shows, people dance. It’s wonderful to see.

Can fans look forward to any upcoming shows or tours soon?

We’re always busy around Halloween. After Unlucky 13 on Friday the 13th, we’ll be performing at a Witches Ball here in Texas on October 21st, and then it’s on to Wizard World Con Oklahoma City for an October 27th performance during the con and then the after party on October 28th. Beyond October, everyone can check movmusic.com for show announcements and tour dates.