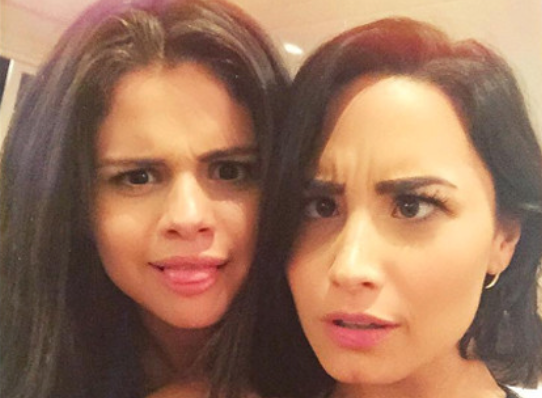 Selena Gomez and Demi Lovato have had a lot of public ups and downs with their on-again, off-again friendship. But over their years in the spotlight the two have given us some pretty awesome BFF moments. In fact, before Selena was a “Bad Liar” and Demi was “Cool for the Summer,” these two babes were kicking it with none other than Barney! Since they’ve been friends since childhood, the Sel and Demi have had loads of time to make some incredible memories, and here are just some of our favorites!

1. When they met on Barney & Friends.

Number one on our BFF Goals list has to be where these two besties got their start, which was in 2002 on the set of Barney & Friends. This was only the beginning of the duos budding friendship. Eventually, the two would move onto working on the television powerhouse network, the Disney Channel, which rocketed the start of both of their careers in music and acting.

2. When they were on Disney Channel… at the same time.

The pair were the epitome of friendship goals in 2008, while they were both working with Disney. Selena was working on her hit show, Wizards of Waverly Place, and Demi was making every tween girl jealous in the Disney Film, Camp Rock. The two made vlogs answering fan questions and doing silly best friend handshakes. They even got into a vlog battle with fellow Disney star Miley Cyrus and her BFF Mandy when Miley seemingly poked-fun at the duos videos.

3. When they reunited at the X Factor.

After a few years of “Bad Blood” at the alleged hands of Taylor Swift, Selena and Demi were reunited in 2013 when Selena performed her song “Slow Down” on the X Factor while Demi was a judge. After her performance, Selena posted a picture to Instagram of the longtime friends with the caption, “It’s just evidence of forever. No matter what @ddlovato,” proving that nothing will break the bond between these two.

Demi responded by tweeting back,

@selenagomez I'm glad you were born too… 😝 #nomatterwhat #forever 💗💗💗

The one thing these two BFFs keep consistent is the forever part of BFF. They always come back together no matter what, which is what makes this sweet tweet number four on our list!

5. When they took a funny selfie with a pun-ny caption.

For BFF moment number five, Demi posted to Instagram a picture of the pair rocking some goofy faces with the caption, “Look how #CoolForTheSummer we are. Friends for years. #sameoldlove.” Who doesn’t want to be #CoolForTheSummer like these two?

6. When Demi showed support for Selena through her kidney transplant.

This September, Selena came out to the public about her struggles with Lupus and about her recent kidney transplant because of the disease. When asked about Selena, Demi showed her support in an interview with People Magazine saying, “I think she is a strong woman. I am very proud and happy for her,” proving, again, that these two will always be there for one another no matter what.

7. When Selena complimented Demi BIG TIME following the release of her documentary.

Selena’s comments had fans in a tizzy. Seeing the #girllove coming from the most beloved BFFs of the late 2000’s sent twitter in a tailspin. Demi responded to Selena’s comment’s saying,

OMG DEMI REPLIED SELENA MY HEART IS RACING KANSISN AND SHES ALSO FOLLOWING HER BACK pic.twitter.com/FvAXFRR9LR

8. Reunion at the Instyle Awards

If all the love between these two over social media wasn’t enough to make Delena fans swoon, the picture of Demi and Selena at the Instyle Awards will! The two reunited in person earlier this week looking absolutely fabulous. Selena kept it simple in a short black number and Demi wowed in a lilac dress with a thigh-high slit. Glad to see these two childhood besties all grown up and still showing the love for one another. Keep it up girls!

As with all BFFs, Demi and Selena have had good times and bad, but these two have continued to warm the hearts of fans everywhere with their love and support for one another over the years. If you ask us, they are the true definition of BFF goals!