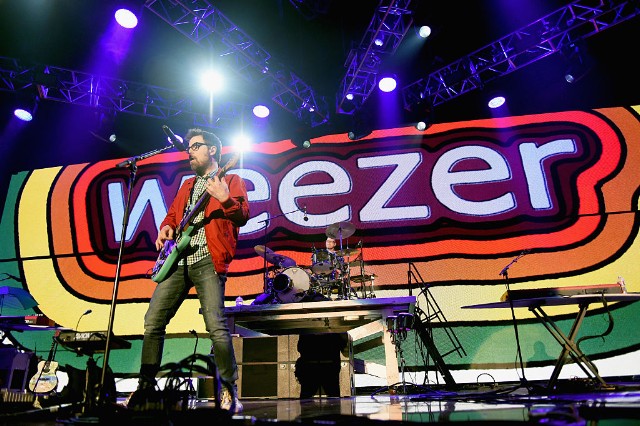 Weezer is on the brink of another major release with their upcoming record Pacific Daydream, and “Happy Hour” only provides another example of how the band continues to broaden their sound.

Departing from their signature Nineties guitar instrumentals, Weezer sings along a slow tempo with enriched production that translates the melancholy message of loneliness. In fact, in an interview with Zane Low before the release, Rivers Cuomo claimed, “We really challenged ourselves to leave behind the Nineties distorted guitar, downstroke eighth note thing and try to see what else we can do.” “I need happy hour/On sad days” comprises the center for the chorus, as Rivers Cuomo ponders his desire to find solace in the bar scene, but ultimately feel rejection over participating in such an activity. It’s quite a dark theme for Cuomo to explore, but as usual, Weezer makes the song sound like the most relaxing beach-weekend track in your library.

Little lyrics like “I think I can stay here for the rest of my life” and “Please don’t make me go home” make the listener feel like they are joining Cuomo for a night on the town in “Happy Hour.” Weezer has always possessed that young-rebel attitude that grabbed the attention of millions of alternative fans early in their career, but it seems like this song is a hint at them evolving that attitude into the adult realm. As most of their fans are well into their thirties by now, perhaps we will see a new shade to Weezer’s discography on this highly-anticipated record.

Before the release of “Happy Hour,” Weezer also released four other tracks from Pacific Daydream — “Feels Like Summer,” “Mexican Fender,” “Beach Boys,” and “Weekend Woman.” Personally, I feel that “Mexican Fender” remains the highlight of these promotional tracks, and I encourage fans to check the track out in addition to “Happy Hour.” Pacific Daydream is due for release on October 27th, so make sure to keep your eyes out at your local record shop and iTunes to grab the record first!