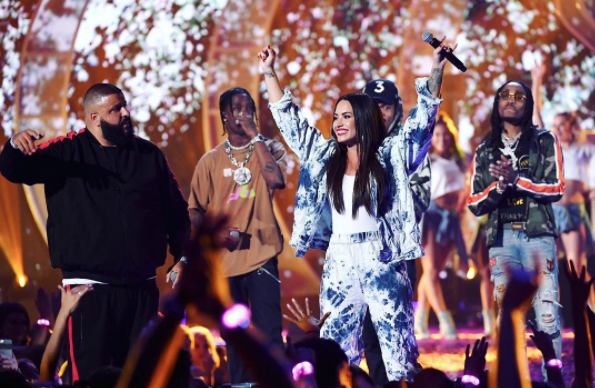 With the release of Demi Lovato’s Tell Me You Love Me last month, fans have been anxiously awaiting the release of tour dates so that they could hear these new songs live. This past Thursday, Lovato took to her social media and teased a “major” tour announcement, hinting at a very special guest who will be making the trek with her.

It was then revealed that Demi would be hitting the road with none other than DJ Khaled! Shortly after, with the help of her Lovatics, all of the dates and venues were tweeted out for the tour, which will make its rounds this winter/spring.

Surprising to some, this tour won’t be the first time these two have collaborated! Demi and Khaled performed together at this year’s iHeartRadio Music Festival in Las Vegas when she joined in on his set at the end of the show to perform “Sorry Not Sorry” alongside other rappers Travis Scott, Chance the Rapper, and Quavo.

In Lovato’s recent Instagram live story with DJ Khaled, she reveals she knew she wanted to tour with him ever since she went to his show. After opening up for Beyoncé on her Formation World Tour last year, Khaled expressed his extreme gratitude toward Demi for inviting him to come along. In addition to hinting at bringing special surprise guests for many cities, Khaled made one thing clear saying, “When I signed that contract, I put in big bold letters: I’m gonna light that whole stage up, guaranteed.”

This tour is going to be nothing less than epic. Lovato’s shows are always exhilarating as she takes full command of the audience with her insane vocals and stage presence. Adding DJ Khaled to the mix with his fun personality and chart-topping hits will add even more energy to create a truly unforgettable concert experience.

The tour begins on February 26th in San Diego, CA and wraps up in the Sunshine State on March 31st in Tampa. Dates and ticketing information can be found here.

What are you most looking forward to on Demi Lovato and DJ Khaled’s tour? Comment below or let us know on Twitter @soundigest!

LOVATICS I’m coming for you! And guess who’s coming with me 😏 NOON PT! pic.twitter.com/92yjq3ASm4