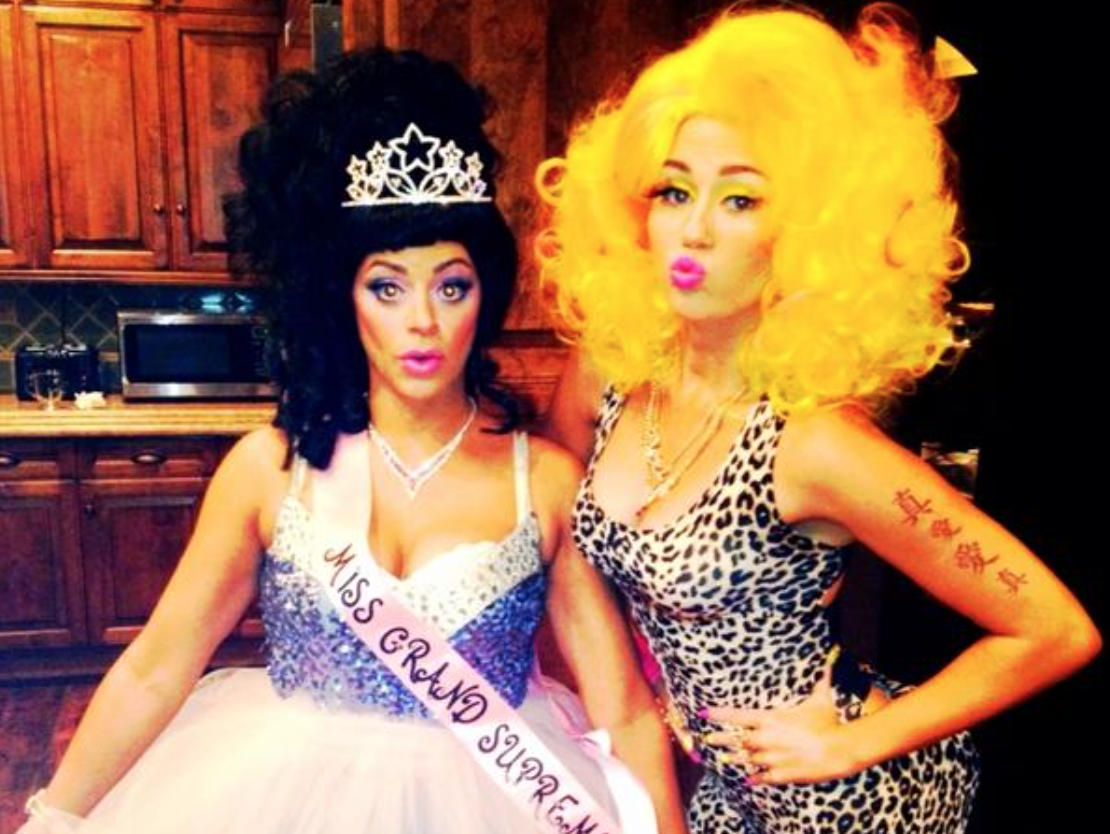 Hey guys! As you all know, Halloween is TOMORROW, and what better time is there to look back on some of the best celebrity halloween costumes that have surfaced over the years?! Some celebs go to the absolute extreme when it comes to their Halloween looks. Personally, I love when celebrities dress up like other celebrities. And of course, even better is when I see some of my favorite musicians dress up as some of their favorite musicians! Don’t remember which of your faves did it? Check out this list of 9 musicians who dressed up as their own musical idols in years past!

Miley and Nicki may have had their beef over the years, but we have to admit… Miley did a pretty good job with her costume of the iconic rapper. We’re not sure what Miley will do this year, but judging from this and all of her other amazing costumes over the years, we’re sure she won’t let us down!

Adam KILLED his take of the Guns N’ Roses singer on Halloween of 2011, but now that he’s married with a baby and another one on the way, we think this year’s costume could be even better. A family costume collaboration perhaps? We sure hope so!

Honestly though, is there anything these girls can’t do? they KILLED this look on Halloween of 2015! Hopefully, the girls do a collaborative costume again this year, because TBH, they’re SO good at that.

When celebs have kids, it’s almost essential that they include them in their costumes. Don’t you think? Queen Bey ***flawlessly included Blue Ivy, dressing her as Michael Jackson while she portrayed Janet, and, we’ll be honest… it’s nothing but perfection. We LOVE this one!

5. Mark Ballas and BC Jean of Alexander Jean as Kurt Cobain and Courtney Love in 2015

Okay, seriously?! Mark and BC NAILED their take on the infamous rocker couple! We don’t know about you, but we’re DEFINITELY feeling the Kurt and Courtney vibes for sure.

Halloween is definitely a time where we see celebs pull out their most clever and creative costume ideas, and the same goes for Zedd! We are OBSESSED with how this one involves one music producer dressed as another music producer! DJ-ception at its finest, wouldn’t you say?

As always, Bey pulled out all the stops by putting together three generations of badass women to pull off the iconic Salt-N-Pepa. YES!

LOL. We’ve got to say, we totally didn’t expect Harry to dress up as Miley from her iconic 2013 VMA performance, but hey… we’re not complaining! Not only does this costume show a lot of skin, but it also shows off Harry’s hilarious sense of humor! We’re still dying over this look, TBH.

Over the weekend, Demi Lovato pulled out an EPIC costume and it just wouldn’t be fair not to include it in our list. Demi dressed as the late Selena Quintanilla, and honestly… she looks almost identical to the OG Selena. Congratulations on a job well done, Demi!

Hopefully these costumes spark some inspiration for the big day, because, let’s be real… you only have 24 hours to make something BIG happen. We can’t wait to see what you all come up with, and of course, we can’t wait to see what our favorite musicians will be dressed up as this year as well! Before you go out and celebrate, let us know which celebrity costume is your favorite, And which musician should dress up as another musician next!