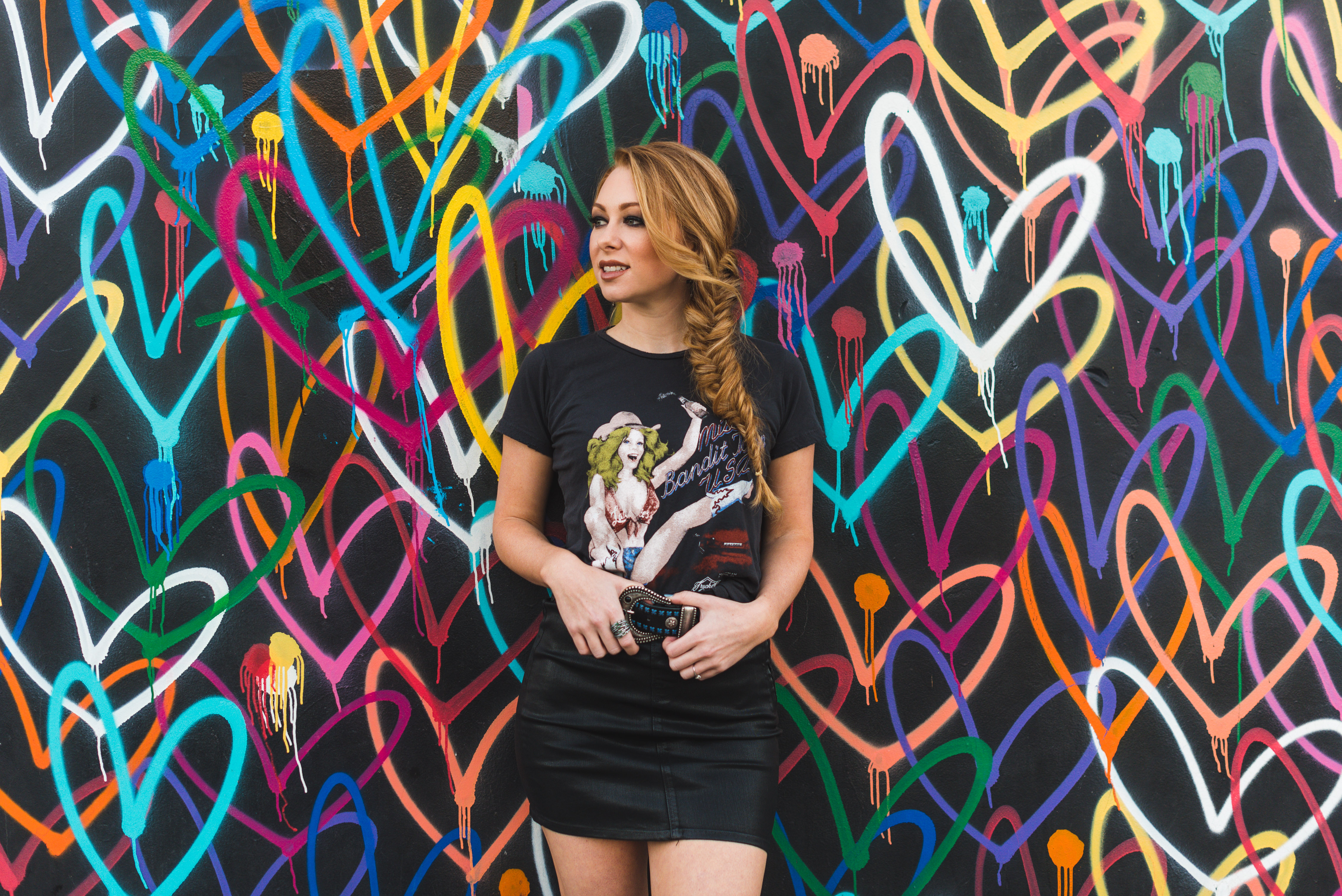 Country/pop songstress Kylie Hughes released her self-titled album this summer and just recently dropped two music videos for album songs “Heat” and “Leave It Alone.” The multi-talented performer splits up her time between Nashville and Los Angeles, is busy planning her wedding, and got her first taste of directing a music video with the Halloween-themed video for “Leave It Alone.” Here, Kylie talks about making the fun “Heat” music video, which was inspired by the classic Will Ferrell comedy Talladega Nights, takes us behind-the-scenes for her eerie “Leave It Alone” video, opens up about the inspirations behind both her light-hearted and touching tracks and hints at a new music video coming soon.

How did you come up with the idea for the “Heat” Talladega Nights-inspired music video?

I’m a big movie fan in general, and I have an interest in not just the music side of entertainment, but also in production and acting and like mixing that kind of stuff with my music. So I was thinking of treatments for it and I didn’t want it to be like classic ‘hot girl, hot guy’ in a car, which you could totally like picture that for that song. I think Talladega Nights was on TV and it just clicked. I did another video in a movie format, so I just thought it would be fun to do a spoof on Talladega Nights.

Is the guy in the music video your fiancé?

No he’s not, but my fiancé was working on set that day ’cause he’s also in production. That was the first time I’ve ever had to make out with somebody that wasn’t him in front of him. I don’t recommend it–very awkward!

What’s your favorite song on your new album?

I feel like there’s three different kinds of feels on the album. There’s kind of like country/pop, like in the middle pop, and then there’s like singer/songwriter type of songs. I like listening to “Hungover” a lot and I really love the production on that song. It was really fun to write so it’s really fun to listen to. But I also really like “Gotta Get Out.” It’s probably my favorite song to perform live because there’s that part in the song that’s like, “you gotta get out of here, away from all that sh*t that you don’t need,” and by the second time singing that I just have everyone in the crowds like screaming that at me. I feel like it’s like the throw your fist in the air part in the song, and like in the live setting everyone’s like “Yeahhh!”

Where did some of the inspiration come from for the more emotional tracks?

A whole bunch of different places. I was recording the album in the span of two years in kind of like a rough time in my personal life. On one hand I had gotten engaged, but on the other my parents had divorced after like a 30-year marriage. It took a while before I could like write anything. I wouldn’t say any of the songs are about that because it was kind of too soon at that time to go into recording, but I did pick out certain emotions, you know, and then like ran with that for songs, like “Always On Your Side” or “Forever Is A Long Way To Fly.” For me, at the time, I used like a space in that without falling apart.

What direction do you think you’re heading into with this new sound?

I’d get bored if I didn’t have the options. Like with the country stuff, I’ve been writing a couple of songs lately, and there’s a limited amount of things to sing about or styles, and I like playing with my sound. You know, really singing this album was an experiment too. You know, what songs do people like me singing? Do people like it a little more stripped down, or do people like pop songs, or do people like to keep it more country? I don’t think I’m ever gonna do the same song twice and every time I record something new, it has to be new for me, too. Like, I’ve never done this before, or I’ve never used this instrument before. The thing that will be through-and-through in my songs will be like my voice and my writing style, but I think sonically, how it sounds, I like to switch it up.

Privately I’ve released probably like four little CDs. I feel like I’m mature enough to know what I wanna sing about. Like, listening to stuff when I was 13, I’m like, ‘Oh god’ [laughing]. I felt like very proud of it and not like I’m gonna regret any production choice or lyrical choice. What’s different about this one too, is I gave myself time, you know, not just crank something out–I gave myself two years to really flesh out what I wanted it to sound like, start to finish. I think give yourself permission to like not release it, until it’s perfect.

What’s up next for you? Do you have any more music videos in the works? Or touring?

I do! I have a really cool music video that I shot just last month for the song “Leave It Alone.” I also directed. It was my first time directing, and I’ve been doing concepts and treatments but then I hand off the reigns to a director, which is very freeing, especially when you trust your director. But I just wanted to see what it was like. I’ve done enough music videos now where I feel like I could do it, and it is such a juggling [act]. I art directed it and then I directed it, and it’s a very story-heavy video, which I like to do stories, and it’s very heavy Halloween-themed. So it’s like lots of different looks and was really cool.

It was a trip to do a Halloween-themed music video because I kind of have like a little bit of a Katy Perry background where I wasn’t allowed to celebrate Halloween as a kid, and now I’m doing this like dark, Halloween video. Like my mom visited the set and she was like, “Oh my god, what happened?” She’s like, “Who are you!?” And I’m not even a fan of scary movies! And I can’t even watch scary movie trailers. So putting together a Halloween video was like drawing the fine line of what is Halloween and what is too scary for me to do! We have this one scene where its like a séance and I wanted it to have that feel without having anything in it, it’s just like the illusion. So when we were collaborating they were like, “Let’s put a Ouija board in it,” and I was like, “I cannot be anywhere near a Ouija board!” They were like, “We’ll just draw one in,” and I was like “no I’m not going anywhere near a Ouija board.”

I think touring in December is kind of hard, unless you’re Taylor Swift or you’re releasing a Christmas album. And I’m getting married in March and I’m like wedding planning, so I definitely have like a really full plate! I will be playing like one-off shows, but I don’t think a tour will probably be put together until spring next year.

Anything to say to your fans?

Keep listening to the album! I really like to hear what people are liking. This is my second video off the album and my goal is to do one more, so I would love to hear from people which songs they’re gravitating to and which song they would want to see a video for!