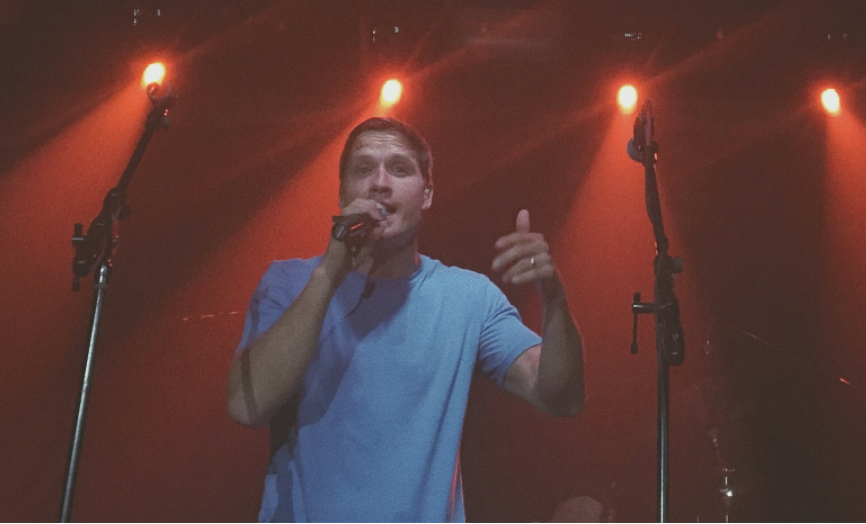 After performing as Thomas Rhett’s opener on his latest tour, Walker Hayes took a break from the opener slot and headlined his own show at American Beauty in New York City on October 30th. If you are asking yourself who exactly Walker Hayes is, let me give you a little introduction to this talented singer-songwriter, who is about to be the biggest thing in country music.

Having moved to Nashville over 10 years ago and falling in and out of record deals, his career finally took off when he was signed to Sony Music’s Monument Records last year under Shane McAnally and Jason Owen. Walker is like no other artist in country music. With just a guitar and his loop pedal, he is able to incorporate amazing, genuine lyrics with beats and raps, creating almost a genre of his own.

Before the show even started, I was given the opportunity to meet Walker, where I told
him how much his music meant to me. I also told him that I believe it won’t be long until he blows up and becomes one of country’s biggest stars. Having a few minutes to chat with Walker meant a lot to me, and proves how down to Earth of a person he is. As the show started, it was clear how happy he was to be performing in front of an audience that was able to scream his lyrics back to him.

Walker’s setlist included the perfect blend of old and new songs, fast and slow songs, and upbeat and sad songs. Backed up by a small band, Walker started the show with “Prescriptions” and transitioned into “Break the Internet.” There were many moments in between songs where Walker would stop and talk to the crowd, creating a personal connection with the audience. He went on singing songs like “Lela’s Stars” and “Beckett,” both of which were inspired by his children. And, because it was the day before Halloween, Hayes would have been silly to leave out his song, “Halloween.” He even had Nicolle Galyon, the incredible Nashville songwriter who co-wrote and is featured on the song, come out and perform it with him. Of course, he couldn’t end without singing “You Broke up With Me,” which is his current radio single.

Walker Hayes’s true talent, prolific lyrics, and amazing stage presence made for a pretty unbelievable concert. His first full length album, Boom, hits the shelves and will be streaming everywhere on December 8th. Be sure to look out for this album, as it’s sure to showcase just how great Walker is. In addition, this upcoming Spring, he’ll be touring with Kelsea Ballerini and that’s definitely a show you won’t want to miss, so get your tickets HERE!