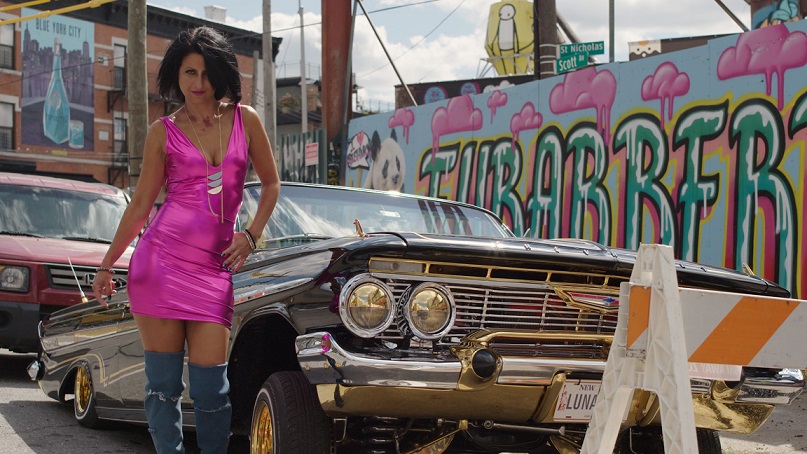 Gina Cutillo is not a new face to the music scene of New York City. Her catchy Billboard hit “Keep On,” song placements on prime TV networks, and a run on the legendary Warped Tour in 2008 has created a portfolio of incredible experience, unforgettable stories, and reliable expertise as a strong and successful woman in music. Soundigest had the opportunity to ask Gina a few questions about her newest single and the music video for “Brand New Start,” as well as hear some unbelievable stories from NYC, and what she thinks about the future of the music industry.

After readers check out this article, which song of yours should they listen to that you think sums up you and your musical style best?

You haven’t released a full length album since 2010, but you’ve been actively dropping singles and music videos since. Why go for this strategy?

The change in the industry due to technology. While I hate to use the term “the kids today,” because it makes me feel old, the kids today (13-16 year-olds) are growing up in a different world and interact with music on another level. No one is going to the store and buying CDs. Everything is downloading, or better yet, streaming on YouTube, Spotify etc., so the attention span has grown a lot shorter and most of the kids like new material. They certainly do not sit with full albums listening until they are your super-fan. I just kind of reacted to the universe.

Also, being a DIY/Indie artist, you need to keep your name out there. You need to always be building and the best way to do that is the incremented releases. It’s a business strategy that works and I learned from an indie label that I took an online marketing course with.  Big artists like Taylor Swift are now releasing four singles before they drop the album. It’s what the business calls for now. However, I would like to just sit down and do a full length but we’ll see.

Do you have an upcoming full-length album in the works? If, so will it have all new songs or feature these older singles?

I go back and forth about that– creating a full length through the singles I dropped and adding, say, four new tracks to it, but then I say “nah.” I’d like to start a new one… have a concept. I want to say, “yes, I have an album in the works and I have since 2010,” but then find myself releasing two tracks here, a track there, two more again… it’s like a sickness. Depending where my career leads will tell whether I shut down and truly take three months to write a full album and release it. If someone would like to fund this, call me!

Your newest single “Brand New Start” is really captivating. What inspired you to write it?

Aww thank you! That’s very sweet to say. The original idea for “Brand New Start” came from the US election last year. The campaign was divisive and pulling people apart… even my own family members! It was upsetting to watch. Regardless of your beliefs, the lack of respect for one another and understanding went out the window because we were watching a bully match on TV. When I feel something so strong inside, I write about it, and the first line of the song was developed: “We are open, we have broken hearts and we’re searching for a brand new start.” I felt that we all had broken down inside and truly needed to start over again. Forget what was said and be the good people we are. I had other personal things going on in my life that related to the song too.

You seem to have found every walk of life to guest star in your music video! What was the purpose of including all of these people and what was it like filming with them?

Some of them were family members, friends, my son and hubby, so working with them was very different as I have never had them in any of my videos. It was a blast and clearly I shouldn’t have been the only one that chose a career in entertainment. Then we had extras brought in through Max Skaff (Director). We discussed the idea of what we wanted the video to portray so we chose all different genders, race, religions, etc. It was great filming with them too; they’re actors so they did very well. The greatest thing was that everyone learned the song and I could feel they really loved it and meant what they were doing and singing. As for the bridal party, that was fully by chance. They just happened to be there taking wedding photos while we were shooting.

I loved how you filmed the video in New York. It’s always great to see artists hold onto their connection with home. You seemed to have had quite a music industry adventure during your time in the Big Apple, so what is one of the wildest, most exciting moments you’ve had in NYC?

I love New York. It’s a beautiful backdrop and it’s where I’m from, so if I can have it in my videos I absolutely take advantage of that. My “Fly (Feel Love Tonight)” music video also has the landscape of NYC. As for the wildest, there are many. The one that stands out the most is when I performed a few songs in front of “The Sopranos” cast. Well, most of the cast. I’d written a song for an indie film that a few of them were in and the director invited me to a restaurant to perform that song and a few other tracks from my album. I get there, look to the audience and see a bunch of actors from “The Sopranos” and “Goodfellas.” I was shocked, but also felt very at home was if I were at my grandma’s house for Sunday dinner.

You get out of the city from time to time as well. Back in 2008, you went on Warped Tour, the coolest tour of the summer, with musicians like Katy Perry and Paramore. What were some of the greatest things you learned from that experience?

That really is the best tour of the summer. I learned that you truly can push your body to its limits: traveling to a different city every day then performing, meeting fans, creating new fans, setting up and working your merch booth, taking it all down, and doing it again the next day somewhere else. It was grueling, but amazing. I would watch Katy’s performance every day. I learned music production from watching her band. I started writing my album The Lover on that tour. I clearly loved music for putting myself through the everyday routine of Warped Tour. One day, I was back stage with Paramore and Hayley was warming up before her show. I always stretched and did some vocal warms ups, but I noticed she started to jump and running in place like crazy. I asked her what she was doing.  She said, “Getting my heart rate up.” OMG… why didn’t I ever think of that? I move around when I perform too, so the first song is always rough, but that little trick made the transition of going from a 0% to 150% performance a lot easier on the body.

Are you planning on going on a full-scale tour anytime in the future with your new music?

Yes… once we get backing or can jump on a tour with someone else that has more success than me. It’s always a goal to tour.

With all of the experience you have in the industry, you are quite the powerhouse. However, as a woman I’m sure you have many obstacles dealing with industry sexism. How have you overcome this and what advice can you give to other girls pursuing a similar career?

I just keep moving along. I never let anyone take away my drive or vision. Sexism is there. That’s why you have to find the correct people to work with. Whatever you do, never let anyone take away your self-esteem. Look at what’s going on in Hollywood right now. Hopefully, this will begin the change that’s needed for women and anyone who is being treated awfully. Equality is something we all need to work at and discuss. And not just women. Men need to be a part of that discussion too. They need to be part of the solution. My biggest advice to other girls pursuing a similar career is if someone is promising you the world and stardom be very careful. It doesn’t work that way. There’s no secret potion that one person can do it for you. If it sounds too good to be true, IT IS! Ask questions, request proof of their successes, who they worked with, etc. If they are not willing to give that information, walk away. A music career is not worth any sexual favor. Nothing is.

That’s a great question! I even think that dependence on live performance is going to start fading too. How many bands are actually out there touring? It’s difficult to make a living that way. Getting people out of their houses. I’m not talking about the Gagas of the world or Beyonce or U2. Yes, they move tickets. I’m talking where all the rest of the musicians/bands fall. My band and I do a live stream on Facebook of our rehearsals we get more eyeballs on those, sometimes 20,000 views, then a local theatre. It’s insane. Where this will lead in five to ten years will probably be somewhere very different and technology-based. Bands will continue to do some of the traditional ways, but things will also continue to change and I have no problem with that. Stay tuned I may be part of that new cool musical future venture. My mind is always looking outside.