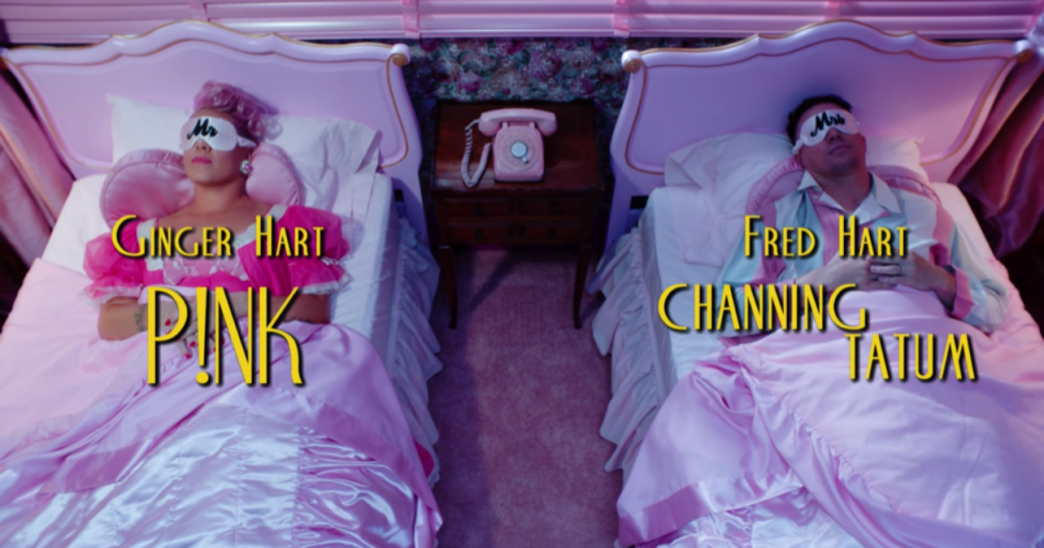 Following an astounding acrobatic performance of “Beautiful Trauma” at the 2017 American Music Awards, P!nk released the music video for the title track on November 21st, starring the singer herself alongside actor Channing Tatum. Bookended by opening and ending credit sequences, the music video for “Beautiful Trauma” is a technicolor rendition of the television shows of the 1950s, but with a novel take on the image of a picture-perfect marriage. From the vintage costume design to the sitcom-esque editing style, the video is not only a feast for the eyes, but also a meaningful portrayal of a complicated relationship, and we’re here to unpack it all for you.

Following the fictional married couple of Fred and Ginger Hart (a clever mashup of Fred Astaire, Ginger Rogers, and Pink’s long-time partner Carey Hart), the opening scene shows Tatum and Pink waking up in separate beds with their respective “Mr.” and “Mrs.” eye masks, seemingly innocent enough. However, as a heart-shaped cut-out signals a transition to the next scene, both of them don a mischievous smile, indicating that life in the Hart household is not what it may seem. As the scenes progress through brightly color-coordinated rooms, the couple reveal more and more of the secrets underlying their relationship.

In a teal living room, Pink accidentally irons a hole in her husband’s shirt while Tatum peruses a racy magazine. The next scene is set in a sunny yellow kitchen, where she pulls a burned dish out of the oven and he pours a flask of alcohol into his morning coffee. At this point, we arrive at the chorus of the song, and as Pink belts out “The pill I keep takin’// The nightmare I wake in,” she downs a handful of capsules from a cabinet shelf stocked full of pill containers. Suddenly, the kitchen is cast in a green light and Pink and Tatum break out into a dance reminiscent of Damien Chazelle’s La La Land, and twirl into the next room. Throughout the following scenes, we see the two continue to break the rules of a so-called “perfect” marriage, from Pink discovering Tatum trying on her clothes, leading to a cross-dressing dance sequence, to the couple engaging in S&M with a leather-clad character played by Nikki Tuazon. Yet, despite all the alcohol, drugs, and stress that comes with their marriage, Fred and Ginger Hart return to their individual beds at night, this time with gender-swapped eye masks, content and at peace.

In this production, directors Nick Florez and RJ Durell capture the essence of “Beautiful Trauma,” a song Pink co-wrote with Jack Antonoff because, as she tweeted, “life is f-cking traumatic. But it’s also incredibly beautiful, too.” This sentiment is reflected in Fred and Ginger’s relationship – despite the imperfections in their married life and their individual shortcomings, they embrace each other whole-heartedly, recognizing the beauty amidst the trauma.