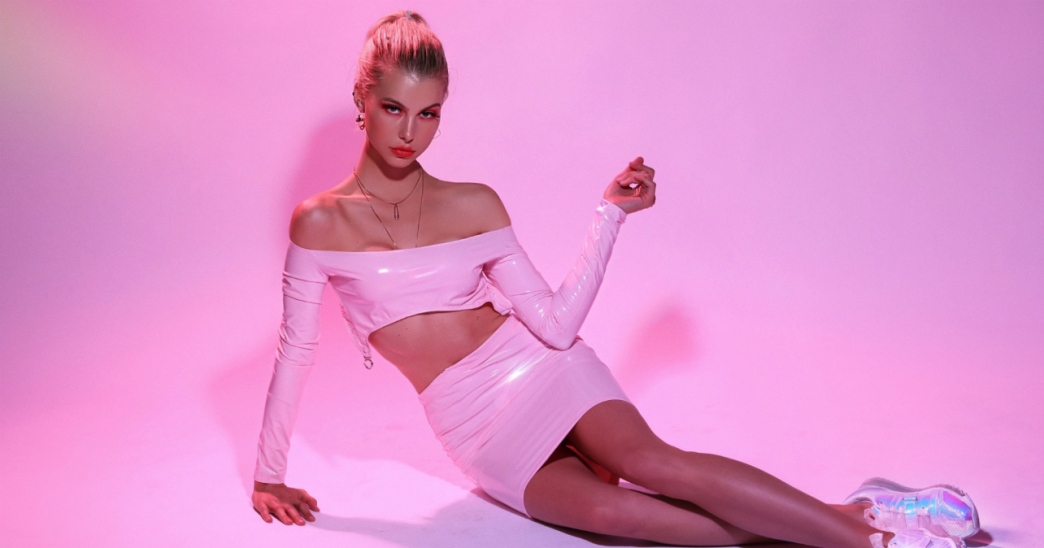 We recently had the opportunity to interview rising pop star, Lexi Atkins. In addition to breaking into the music industry, Atkins is a model and an actress, and she’s appeared in several popular films, including Ted 2 and Jennifer Lopez‘s The Boy Next Door. We chatted about fashion, upcoming music, and of course, her new single, “#PURR!” Be sure to check it out below.  You can keep up with Lexi on all her social media pages here, including her Soundcloud, Instagram, Twitter, and Facebook.

You just released your new single, “#PURR.” Tell us a little bit about the track and what it means to you.

YES! I’m so excited to finally have the song out! It’s one of the songs on my album! I decided to release it first as a single before dropping the project because I thought it could definitely stand alone as well. The track was inspired by my cat (12) actually! My producers were over one day and we were just talking about how funny she can be and started relating the two concepts… which then ended up turning into making the beat and writing lyrics down. Next thing you know, we started singing “blame it on the purr,” which still is something we constantly say! It’s such a fun song to me, and I’m happy to finally get to share with everyone!

You’ve also released a sneak peek of the music video for fans to see on YouTube. Tell us about the concept of the video and how it all came together.

Producing visuals are very important to me! That’s just how my mind operates. It’s one of my favorite parts about creating the music actually… to get to finally see the music come to life! For “PURR” specifically, I wanted to have it be somewhat of a ’90s theme, since I’m definitely a 90s baby. In the lyrics I say, “I’ve always walked my own direction” saying I’ve always been this way, so I wanted it to come full circle. I also wanted the video to be as feminine as possible, hence having an explosion of pink. I also had to create a cat costume to incorporate. I really wanted to make those visual come alive with the “girls/felines” concept. And last but not least, I can’t complete a video without adding some sort of “alien” aspect to it. I love aliens, which a lot of people know, so in all my visuals there will always be a touch of that.

You are also an actress and have appeared in many movies fans may recognize, including Ted 2 and The Boy Next Door. What do you look for in either a movie or character that draws you to audition for the role?

To tell the truth, I’ve never really looked for anything specific when auditioning for roles. I love acting so much, and any character intrigues me. At this point in my career I’m willing to take on any role. It feeds my creativity and soul! Specifically though, with Ted 2 and The Boy Next Door, it was an honor honestly to get to work with such an amazing cast and crew. That opportunity alone sparked interest in me! I would have even been a fly on the wall to get the opportunity to see such talented people work!

Do you prefer acting over music or vice versa? Why?

I honestly don’t prefer one or the other. They’re both so similar in my opinion. You’re taking a story and a character and putting them to life! I guess the only difference would be that with my music I have a lot more creative control which can be more fulfilling at times.

Of the many artists who you have shared the stage with since your music launch in 2015, including Daya and Diplo, do you have a personal favorite or favorite memory of touring with a particular artist? Do you draw inspiration from any of them?

It was an honor and an exciting time to get to share a stage with such talented artists! I don’t have a personal favorite honestly, and I’m still SO new to performing musically. I draw a lot of inspiration from those artists though! Especially when you get to watch someone live. It’s such a different feeling. Anyone who goes to festivals can say the same I’m sure. I think the biggest thing I took from those experiences was the amount of respect I now have for everyone who performs live. There is SO much that goes on behind the scenes that even I didn’t know about prior, so after going through even an ounce of it myself, I got to really see firsthand how much hard work every artist really puts into their craft and performances.

Not only do you sing and act, but you’re also a model. Tell us how you got involved in modeling and about your fashion sense.

Yes, I’m represented by Wilhelmina Models! They’re such an amazing agency and I’m so happy to be working with them. I got signed with them when I first moved to LA. They were the first agency I met with and I’ve been with them ever since. My fashion is always very different due to always playing different roles from movies to TV and modeling auditions. I’m constantly having to change up my style a bit to fit the role or client. Something that always stays consistent though is that I love adding anything different to what I’m wearing. I love pairing at least one “odd color, pattern, crystal, or jewelry with what I’m wearing.” If I ever have an opportunity to add a touch of “weird,” then by all means I got for it!

Do you think that fashion plays a role in your music career. Why or why not?

YES. Fashion definitely plays a big role in my music! Fashion is a way of expressing yourself in my opinion… so when creating visuals and really “branding” anything in general I think what you wear has a huge aspect to that!

How do you think your music has evolved in the last couple of years since you launched your career back in 2015? Do you write more lyrics or are you more involved with the song production? Or has your music style evolved in another way?

I think in general I’ve really learned more about myself as an artist over the past few years, and what I want with my music. I also am definitely 100% more involved than I ever was before. I’m there from start to finish from all aspects of creating the music, to then finally producing the sounds into visuals. I also have given myself more of the freedom to be experimental. Before I was afraid to really speak to others about what I would envision. I didn’t want to be judged. Over the years, though, I’ve really stepped into my creativity, and have finally found a group of friends and artists who are willing to create art with me that has more meaning behind it.

I don’t have anything specifically planned yet, no. I’m just focusing on getting the music out there and heard before I started to perform the music live!