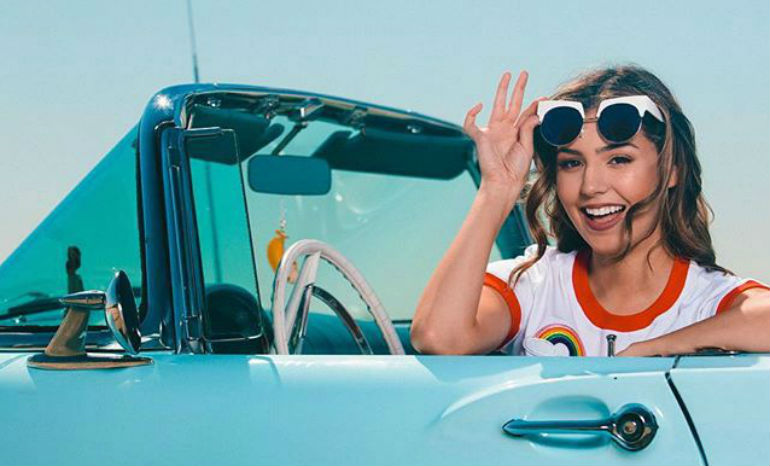 On November 29th, I had the chance to experience Jessica Andrea‘s first ever headlining tour – The Electric Tour. The pop singer just released her debut EP Electric in August of 2017, and with the support of her loyal fans, she decided to tour across the country, from Los Angeles to New York, and then to Chicago.

For those who are new to Jessica Andrea, let me formally introduce you. Jessica Andrea-Hall grew up in Southern California where she first pursued performing as a dancer during her youth. She’s always been passionate about music and dance, but it wasn’t until she turned 18 that she decided to take singing as a serious craft. A few years later, she met her current husband, Robert Bryson Hall II (also known as rapper Logic), and by 2015 they tied the knot. Andrea’s vocals have been previously featured in many of her husband’s songs, including “Flexicution,” “I’m Gone,” “Hallelujah,” and “Confess.” This year, Andrea finally emerged into the music industry as a solo artist when she signed with Team Elysium.

As a big fan of Andrea myself, I naturally bought the VIP meet & greet ticket to her Chicago show. The tours three shows were booked in smaller, club-sized venues to create an intimate atmosphere and close connection for Andrea and her fans. As a VIP guest, I was granted the opportunity to personally meet Andrea and snap a photo with her! The VIP package also included an exclusive signed poster and a tiny box of Baked by Melissa cupcakes.

John Lindahl (who is also signed to Team Elysium) opened up the show with his smooth dance moves and impressive vocals. He performed incredible covers of Justin Bieber‘s “Love Yourself” and Ed Sheeran‘s “Thinking Out Loud.” To finish off his set, he hyped up the crowd with his latest single “Contagious” from his upcoming EP Changes.

Flawlessly making her way to the stage, Jessica Andrea started her set with her energetic, empowering song “Fake It.” I personally think that she couldn’t have started the show in a more perfect way. “Fake It” is all about inspiring people to chase after their passions and dreams no matter how self-conscious they may feel. Andrea has been very honest with her fans about her career and has openly admitted to some insecurities about her craft.

In a recent Instagram caption she shared, “I just want to show you all that you really can do anything and that it may take time, but don’t ever give up. So many times I cried, thought I sucked, and never thought I would have the courage to be on stage and actually sing for you all. I just want to set a great example for people that you can be your silly self and not let fear take over your life.” Might I add that Andrea has definitely achieved this goal as she waltzed into her own meet & greet wearing a Christmas onesie paired with reindeer antlers? If that doesn’t scream “unapologetically be yourself,” I don’t know what does!

Andrea’s set covered all five of her songs from her EP, along with a soulful cover of Katy Perry‘s “The One That Got Away,” and the unreleased emotional ballad “Try,” which Andrea dedicated to her husband. As I looked out into the crowd, I noticed how impressive Andrea’s stage presence was. During her upbeat pop songs she had everyone in the venue dancing. However, I also witnessed many tears in the crowd while she performed the more sentimental songs off of her set. Anyone who has the pleasure to experience Andrea live will be able to understand how captivating her talents are.

Although The Electric Tour has came to a close, be on the lookout for new releases from Jessica Andrea! While she takes a break from tour, you can keep up with her on her Twitter, Instagram, and YouTube channel.