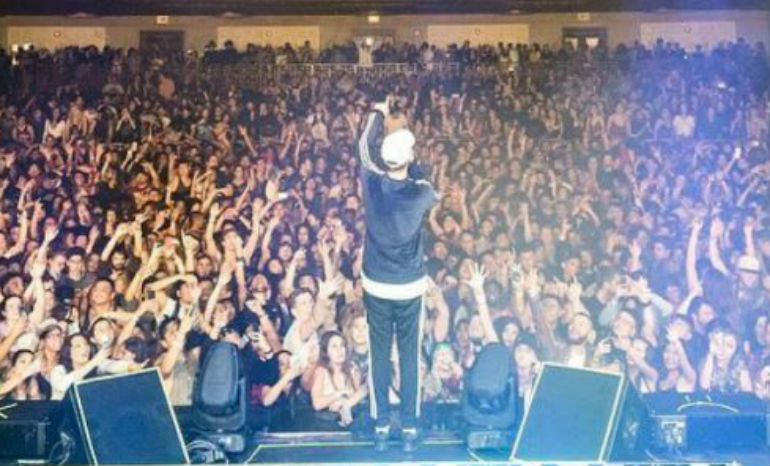 On December 2nd, 2017, San Holo took the stage at Oakland’s Fox Theater along with Just a Gent and DROELOE. Performing under his Star Wars-inspired stage name San Holo, Sander van Dijck is a multi-talented DJ, guitarist, and producer from the Netherlands who has risen to prominence in the EDM world in the last couple of years. Notably, he boasts over three million monthly listeners on Spotify, has collaborated with musicians such as James Vincent McMorrow, and even founded his own record label bitbird, which represents fellow tour mates Just a Gent and DROELOE, among other artists. This concert at Fox Theater was one of many stops on San Holo’s worldwide tour in promotion of bitbird’s latest compilation album, Gouldian Finch #2.

Kicking off the evening, Dutch DJs DROELOE (Vincent Rooijers and Hein Hamers) generated an upbeat atmosphere with remixes of songs such as Charli XCX‘s “Boys,” as well as originals like their Asian-infused track “Kintsugi.” The duo was followed by Just a Gent (Australian producer Jacob Grant), whose set revealed his versatility as an artist with sounds ranging from bass-heavy beats to a remix of Whitney Houston‘s “I Will Always Love You.”

As the third and final act of the night, San Holo’s highly anticipated set featured hits including “Light,” “The Future,” and his most recently released single, “One Thing.” In addition to DJing and providing the vocals in his original songs, he performed a handful of electric guitar solos, proving his aptitude in multiple areas of musicianship. As exemplified by the name of his record label, the theme of birds and flight is a common thread throughout the his career, and his live show was imbued with the same sense of soaring hopefulness.

Carrying himself with an aura of playfulness, San Holo hopped on top of the raised DJ platform, dancing across the stage against a digital backdrop flickering with vibrant clouds, psychedelic palm trees, and fluttering birds. The energy level of the crowd at a concert often reflects how well an artist connects with his or her audience, and San Holo certainly demonstrated his ability to inspire others through his music with this performance. The connection between the artist and his fans was especially apparent during the song, “We Rise,” as the theater echoed with the sound of a sea of voices singing back to him in unison. When the concert appeared to come to an end, San Holo responded to the roar of encores by returning to the stage with a final reprise of “We Rise,” closing the night with as lively of a performance as when he started.