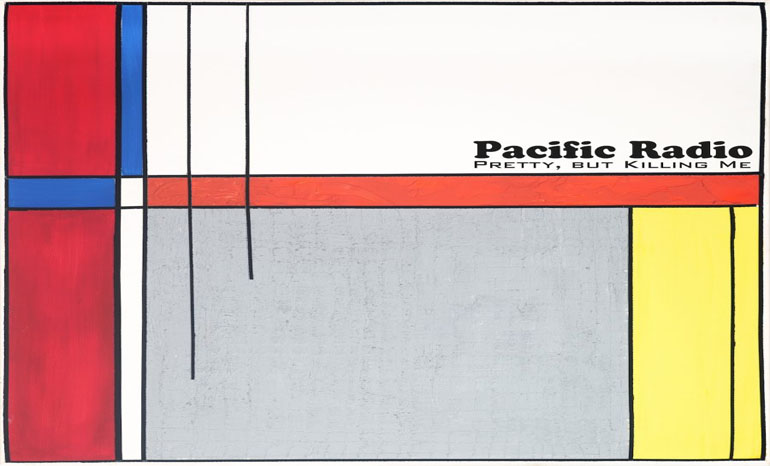 Recently, we had the chance to talk to the guys from LA-based alternative rock band Pacific Radio about their single “Camaro” and their full-length debut album Pretty, But Killing Me. The band is made up of Joe Robinson (Guitar/Lead Vocals), Joe Stiteler (Bass), Kyle Biane (Guitar) and Hyke Shirinian (Drums) and they’re truly a force to be reckoned with! They told us all about the creative process, their favorite tracks off the album and all about the touring life.

Hey guys! Tell us about how Pacific Radio came to be.

JR: Stiteler and I played in a different band and when that split we started bangin’ around ideas which became Pacific Radio.

KB: I joined after I recorded the first batch of demos for the original band (a three-piece). In the production process, we added a bunch of guitar parts. When it came time for shows, Joe and Joe needed someone to cover stuff. Lucky for me, I was the call.

HS: And, I met Kyle through Craigslist 9 years ago and him and I work on pretty much every project we both do. He pulled me into PacRad about 3 years ago.

You recently released your single “Camaro”, along with a music video. What’s the process of coming up with a visual for a track like?

JS: We let our minds flood with ideas, then we look at our bank account and do something totally different.

KB: The video was really born out of us looking back at a TON of footage we had from 2017 touring. I have always loved “found footage/ touring videos”. We decided to take a shot at one of our own. The process really involved the band members sitting with our editor, Zach Driscoll, and sorting through hours of nonsense to find some fun moments for the video.

You also just released Pretty, but Killing Me, your first full-length album on December 8, what’s it like gearing up for that?

JR: We’ve played so much, I’m excited for the people to be able to take it with them. You know, throw it in a high-speed chase or fist fighting your neighbor.

JS: For all the shows we’ve played over the past few years, and rehearsals, and recordings etc; it feels amazing to have a complete product to show for it. The anticipation is killing me!

KB: Lots of work, but very exciting. We put a lot into this record and putting our best foot forward is really important, especially for a debut. We have spent the last month trying to lay the groundwork for a successful release. It has been a great learning process to see how much more there is than music to putting out an album.

Tell us about the journey of recording an album. How did it all come together?

KB: We entered the studio along with our producer, Eric Weaver, and started dissecting the songs. Every part was examined and tweaked to be the best it could be. Some days were longer than others, but in the end, I feel we came out with a record that not only represents all the meaning in the tunes but gives a good picture of the band as a whole.

HS: One thing to add.. Recording drums with Eric sounds magical. Once everything is dialed in and we start tracking it’s as if I’m playing to a record. I’m playing drums “inside” a “Cd”.. that’s something I had never experienced before.

If you had to pick one track off of Pretty, but Killing Me, which one would you say is your favorite and why?

JR: I’ve always liked the party behind “Last Nights Makeup.” I wrote the lyrics about the girl who wakes up in makeup and heels and has to work at noon. Come on, that’s you, or your wife 10 years ago, or your wife tomorrow. It’s a good, simple riff with a sing-along chorus. It’s the recipe for radical.

JS: I pick a new favorite every time we play. “L.A. is Pretty” always feels special, and it’s the one song we typically play without a click, so we follow JRs vocals and mood and the songs breathes differently each time we play it.

KB: I would have to say “Smile”, that one always had the most energy to me. It’s just a fun burner.

HS: I love “LA is Pretty”… it’s the first song we did together that had me feeling like I’m a part of the band. Also just an emotional song to me.

What do you want listeners to experience when listening to your record?

JS: I want them to grow imaginary long hair and fling their head to and to and fro.

KB: The inability to hold still.

You guys have done a lot of touring on the West Coast, including an awesome performance at this year’s Bottlerock Festival in Napa. Can we expect more touring from you guys in 2018?

JS: I’d tour every day if I could.

KB: Yes! We hope to not only retrace our west coast path but make it out further into the country. New York has been showing us some love on the internet. Hopefully, some announcements are soon to follow.