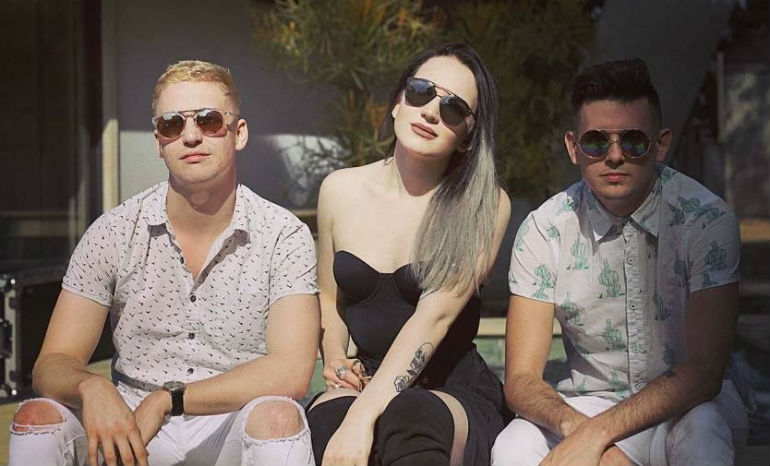 If you’re not yet on the Nikki’s Wives bandwagon, allow us to help you out a bit. The band, who draws influenced from 80’s pop, rock, and now, hip-hop, is making their return with their latest single, “Slow Fast Slow.” The band, who has toured with acts that include Drake Bell and Cee-Lo Green, took some time to discuss with us what tour life has been like, as well as their plans for the future. Make sure to listen to their music ASAP, and, of course, check out our interview with them right here:

What was the song you heard when you were a kid that made you want to play music?

My dad showed me a video of Cherie Curry and Joan Jett of The Runaways playing their song “Cherry Bomb” live in Japan, and I remember thinking to myself that I wanna do something that makes me look that badass. Their raw energy and passion while performing inspired me to come out of my shyness and pursue my love of music.

If you could replace yourself in Nikki’s Wives with another artist or celebrity, who would it be?

David Lee Roth from Van Halen. I think the guys would really like that. And I wanna see how crazy he would go while singing our songs.

What do you do to unwind after performing?

After stepping off stage, I always run over to the merch table to go meet the fans that have been waiting there, or the people who have just caught our set for the first time. Some of my favourite moments of touring and playing music have come from those post-show interactions at the merch table. But I’m a pretty shy person internally, so after all is said and done, I always take a moment to just be alone and rest my jaw from smiling.

If you weren’t playing music, what do you think you would be doing instead?

We always talk about this while driving in the van, and we can never come up with anything else we would rather be doing. We’ve all be pursuing this for long enough that the thought of doing anything else is unimaginable. The guys both have degrees in music and have worked in numerous fields outside of the music industry, but they just cant seem to get enough of that tour life. I’ve been playing music around Canada since I was in grade 8 and I graduated high school while on tour last year, so music has kind of brought me up in a way.

How did it feel to be touring with Drake Bell?

It’s always interesting being on tour with people you looked up to as a kid. You forget the superstar status you gave them when you were 12 once you realize that they’re just normal people. The tour we were on with Drake was an amazing experience to be apart of. We went to over thirty high schools in the United States who have lost music funding and put on a two-hour music and arts festival for them. At the end of the tour, the company donated a thirty thousand dollar recording studio to each school as well. It was amazing knowing that these kids now have the tools to pursue their dreams.

You’ve also toured with Cee-Lo Green before. Was there any advice that he gave you that really stuck with you?

Cee-Lo’s advice came from the stories he told us, sitting in the bus at 4am, passing bottles of Jameson around. He taught us to always stay humble and to be grateful for every opportunity you’ve been given. We really became a band under Cee-Lo’s wing; he helped mentor us from a bunch of young Canadian kids to actual musicians.

What was it like knowing that you were shooting the “Show Me” music video with the notorious Ron Jeremy?

It was honestly super weird, but we were all into the idea. I think he adds a funny element to the video and he is just such an engaging person to be around. Every time I watch the video his facial expressions still make me laugh.

What was the inspiration for your recently released single, “Slow Fast Slow”?

“Slow Fast Slow” is a song about two powerful people who are in a poisonous relationship together. Their own vanity fuels the relationship, but is also the reason why it’s not working out. The inspiration for the song came from wanting to have a song that’s about a woman who’s kinda the boss of the relationship.

Some songs from your last EP were influenced by 80’s pop and rock. Are any of the tracks that you’re currently working on going to be hip-hop inspired, since some of the band’s inspirations are rappers like A$AP Rocky and Kendrick Lamar?

Yeah, recent hip-hop songs have inspired actually quite a few of the songs. Hip-hop is just such a huge genre in music that it’s almost impossible to not draw inspiration from it. A lot of the vocal melodies in out newer tracks have been influenced by the flows from various rappers from Canada, the UK and the States.

What’s your favorite track to play live off the For E•V•E•R EP?

My personal favorites are “Ghost” and “Forever”. “Ghost” is such an emotional experience to play. I feel like I go off into my own little world for a few minutes. “Forever” is just fun to play because its big and aggressive, so its easy to move around and interact with the guys. Nate also comes out from behind his drum kit and walks around on stage. I just think that song showcases all of our personalities while on stage.