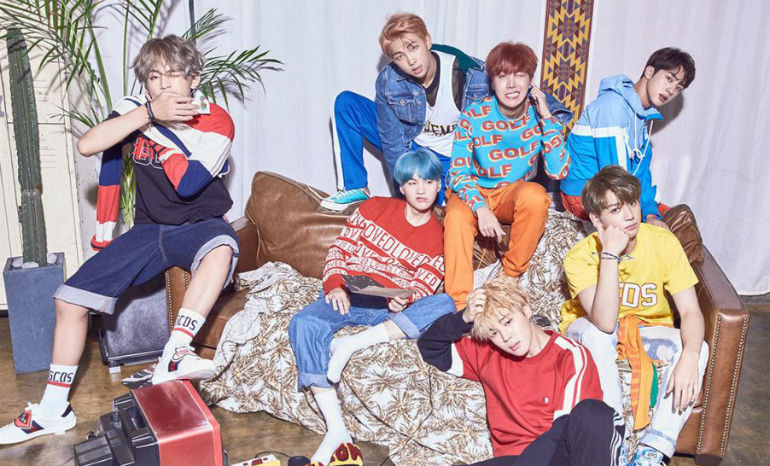 In the dimly lit arena, hundreds of globe-shaped lightsticks rise into the air, piercing the vast blackness with specks of brilliant white light. Within the first few notes of the song, the audience steadily begins to chant: “Kim Namjoon, Kim Seokjin, Min Yoongi, Jung Hoseok, Park Jimin, Kim Taehyung, Jeon Jungkook!” These are the names of the seven young men who are known and loved around the world today as BTS. Formed by the South Korean company Big Hit Entertainment in 2013, BTS (an abbreviation of Bangtan Sonyeondan, which is Korean for Bulletproof Boyscouts) has skyrocketed into fame in the past four years, surpassing milestones never before accomplished by any K-pop group, or even most bands for that matter. 2017 has been an especially successful year for BTS, and in this retrospective, we’ll take a look back at their biggest breakthroughs in the music industry and their continuing impact on fans around the world.

From Formation to Debut

Like most Korean artists, the members of BTS trained for several years before their debut in June of 2013. At the root of the K-pop industry are entertainment studios, which coach trainees as young as 12 in singing, dancing, and foreign languages, among other skills, with only a small percentage of them actually debuting as part of a group and earning the title of “idol.” The members of BTS were scouted and trained by Big Hit Entertainment, headed by CEO Bang Si Hyuk. A smaller and less established studio, Big Hit has nonetheless proven their ability to cultivate talent through their approach with BTS. The group consists of vocalists Jin (Kim Seokjin), Jimin (Park Jimin), V (Kim Taehyung), and Jungkook (Jeon Jungkook), as well as rappers RM (Kim Namjoon), Suga (Min Yoongi), and J-Hope (Jung Hoseok). From underdogs to global sensations, BTS has amassed a loyal fanbase and gained tremendous ardor and acclaim worldwide since their original debut.

Even if you’re not familiar with the world of K-pop, you’ve likely come across some mention of BTS or their fanbase, ARMY, on the Internet. The band has maintained an active social media presence throughout their music career, cultivating a global fanbase through the online space.

The unwavering dedication of ARMY paid off in the 2017 Billboard Music Awards, where BTS took home the award for Top Social Artist, breaking Justin Bieber’s six-year winning streak. As the first ever K-pop group to receive an award at the BBMAs, BTS acknowledged this watershed moment by featuring an audio clip of their speech on their latest mini-album Love Yourself 承 ‘Her’ , released on September 18th, 2017. Since receiving the Top Social Artist award in May, BTS’s personal Twitter account has nearly doubled in follower count and, as of December 2017, is upwards of 11 million. The band is the most Tweeted-about celebrity in 2017 and holds the title of “Most Twitter Engagements for a Music Group” in the 2018 Guinness Book of World Records.

BTS’s win at the Billboard Music Awards not only made history for the K-pop genre but also boosted their recognition in the United States. Back in 2012, the American Music Awards featured a medley performed by MC Hammer and Korean artist PSY, an early instance of the blending of Eastern and Western cultures within the mainstream music industry. However, it wouldn’t be until five years later that an invitation would be extended to another K-pop act.

On November 19th, 2017, BTS became the first K-pop group to perform at a major American awards show. Singing almost entirely in Korean while dancing to a high-energy yet intricate choreography, the exceptional performance by BTS diverged from the status quo, catching the attention of the media. It was apparent that the AMAs realized the significance of hosting BTS on their show, placing the group as the final act before the closing performance by Diana Ross. Reflecting on their first American televised debut, leader RM stated, “The AMAs didn’t treat us as a curious novelty from Asia, but showed us respect and treated us as an important part of the show. […] It was clear in many ways that they knew a lot about us and had prepared for our appearance for a long time.”

In addition to their AMAs performance, BTS’s trip to the U.S. in November also included several appearances on radio and television talk shows. For the public, this was the first glimpse of just how influential BTS is. Interviewers repeatedly commented on the intense devotion of ARMY, from the synchronized fanchants to the hours spent waiting to see them. When BTS appeared as a guest on their respective shows, hosts Jimmy Kimmel and Ellen Degeneres both expressed surprise at the number of enthusiastic fans in attendance. It was during this period that, perhaps for the first time, people began to see BTS not as a band contained within an obscure subculture but as a talented group of individuals with a massive following who can bring something new to the table.

BTS has not only caught the interest of the public but of fellow artists as well. “Best of Me”, an upbeat track from Love Yourself: Her was produced with The Chainsmokers, who gave BTS high praise when introducing the group at the AMAs. More recently, BTS worked with EDM producer Steve Aoki and rapper Desiigner on a remix of their song “MIC Drop”. The remix shot up Billboard’s Hot 100 Chart within the first week, becoming the first song by a K-pop group to reach the Top 40. Some of the members have also been involved in individual collaborations, such as RM’s rap feature on Fall Out Boy’s “Champion” remix. Since their earlier days, BTS’s music has continued to evolve and includes everything from hip-hop tracks to slow ballads. The diversity of their discography demonstrates that they are not restrained to one type of sound, and their work with artists in genres from EDM to alt-rock promises the potential for a wide range of collaborations in the future. Already, there has been speculation about a possible collaboration with Zedd, and Charlie Puth and Post Malone are among the other artists who have mutually expressed interest in working with BTS.

Rising Up the Charts

With BTS’s recent explosion in Western media, many more people are being exposed to Korean music and culture. Fans play a significant role in spreading the gospel of BTS, requesting radio stations to play their songs and consistently streaming their music on Spotify, Youtube, and other platforms. As a result, BTS has soared up the charts. In October, Love Yourself: Her peaked at #7 on the Billboard 200, and their domination on the Billboard charts has led the media group to name BTS as one of their Top Artists of 2017. Recognition has increased in Asia as well, with BTS winning the coveted Artist of the Year title at the 2017 Mnet Asian Music Awards for the second year in a row. During the 2017 Melon Music Awards held in South Korea, BTS won 5 awards collectively including the elusive Global Artist award, a daesang (grand prize) that no one has been deemed worthy of since PSY in 2013.

Considering the number of achievements BTS has had in 2017, it’s no wonder why their rapid growth in the U.S. has been the subject of so many think-pieces. While most of the focus has been on their impressive statistics, it’s also important to reflect on why BTS resonates with so many people of varying genders, ages, and cultures. Their success is evident not just by the numbers but also by their connection with fans. As writers and producers of their own songs, the members of BTS recognize the power of their music and use their voices, both figuratively and literally, to shed light on socially important issues. Quite a few songs relate specifically to young adults, such as commentary on the social and academic pressures faced by students. In “Pied Piper”, BTS even acknowledges the role they play in fueling fans’ possibly unhealthy obsessions, but ARMYs are also deeply inspired and motivated by the members’ dedication and determination, which is why they willingly offer their own time and effort in return.

The self-awareness and humility of BTS indicate a level of maturity not often seen in celebrity culture. Part of their appeal is the authenticity with which the members carry themselves, always remembering their roots and not shying away from expressing vulnerability. Additionally, they have shown that they truly care about using their influence for good. In October, BTS announced their Love Myself campaign, a project with UNICEF to combat violence against youth. The “Bulletproof Boyscouts” are living up to their name in multiple senses of the phrase, forging ahead despite the naysayers trying to shoot them down as well as shielding others from the harshness of life through their music and philanthropic efforts.

In early December, BTS performed the last concert of their worldwide Wings tour in their home country to a sold-out arena of 60,000 fans. The band is finishing the year off strong, having just released a new single “Crystal Snow” for their Japanese album and a promotional song in collaboration with the city of Seoul. To top it off, they are set to perform on Dick Clark’s New Year’s Rockin’ Eve, becoming, once again, the first Korean group to do so. Predictions for 2018 have been abundant and we can expect BTS to deliver new music and performances as part of the anticipated Love Yourself series in the coming months. As the stage lights dim on the year of 2017, BTS will continue forward with hearts full and heads held high, entering the next chapter of their story with their fans proudly cheering them on.

12 thoughts on “BTS’s 2017 World Domination: Everything You Need to Know”