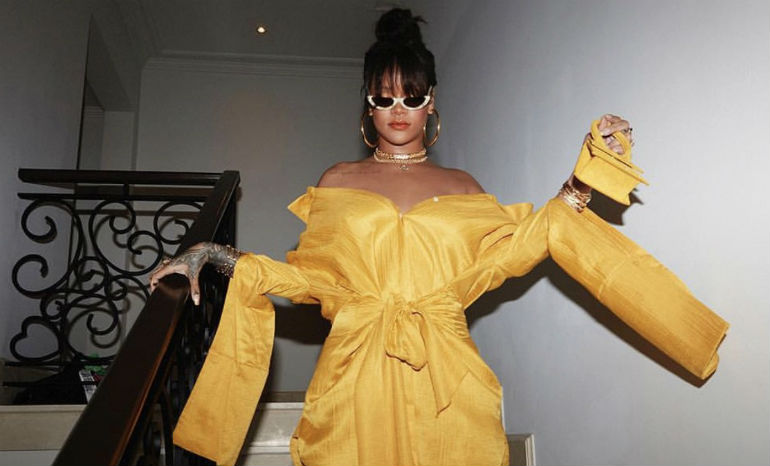 As we all know, fashion and music pretty much go hand-in-hand, as both are a means of self expression. Oftentimes, fashion trends are created by musicians stepping out on the red carpet in something unique, or showcasing certain outfits in their music videos. Lucky for us, 2017 has seen its fair share of fashion moments when it comes to the artists we love, and here are some of our absolute faves:

Ex-boy band member Harry Styles has stepped into the solo spotlight this past year with his self-titled debut album, which was released back in May. Along with this new project came a brand new, never before seen style from Harry. Gone are the days of cute cardigans and matching outfits with the other members of One Direction. Harry is now donning eccentric suits and claiming Shania Twain as a “main influence” on his fashion sense. I can only imagine what other accessories Harry will pair with his suits in 2018, but one things for sure… we know it’ll look good.

We couldn’t even think about writing an article about the most fashion forward musicians of the year without including Met Ball queen, Rihanna. We’ve been having wild thoughts about her Commes des Garcons dress since she slayed the carpet back in May. Besides having a clothing line of her own, Rihanna’s Fenty x Puma creeper shoe was named ‘Shoe of the Year’ in November of 2016. Honestly, 2017 was just as successful fashion-wise for RiRi, and we were just blessed to witness it.

If Rihanna is the queen of 2017, then Cardi B is definitely the princess. Cardi B flipped the script when it comes to female rappers this past year. Her single “Bodak Yellow” became the number one song in the country in September and marked the first solo rapper since Lauryn Hill’s “Doo Wop (That Thing)” in 1998 to claim the top spot. Cardi’s sparkling bodysuits and “bloody shoes” have helped solidify her role as a trendsetter. And let’s not forget her collaboration with Steve Madden shoes that dropped just last week.

This DNCE frontman and former Jonas Brothers singer has stepped out in 2017 as an unlikely menswear trailblazer. When he’s on stage, Joe can be seen in bomber jackets of all colors or in head to toe Moschino. On red carpets, he sticks with polished suits and was even a guest of HM, wearing a wine colored suit on the Met Gala carpet. Now that Joe is engaged to actress Sophie Turner, we can only assume an amazing classic and fitted tux will be in his future.

The “Green Light” singer has emerged back on the music scene this past year after not releasing an album in four whole years. With her latest album Melodrama, the New Zealand singer-songwriter has had quite the year musically, and in fashion, too! She’s graced the cover of Elle  and Vogue Australia. Not to mention her best dressed list worthy red carpet looks and killer on-stage outfits. Whether it’s a Gucci sequined suit or a gingham bustier dress, Lorde has continued her reign within fashion royalty.

This year Demi has shown that she will own each red carpet and that even if one outfit is a total miss, she’s NOT sorry about it. Demi’s vocal range is perfectly reflected in her range of style. Honestly, Demi is probably the only one who can pull off denim on denim since 2000s JT and Britney! When she’s not selling out arenas for her tour with DJ Khaled, or shooting sexy music videos with Jesse Williams, Demi is slaying the fashion game.