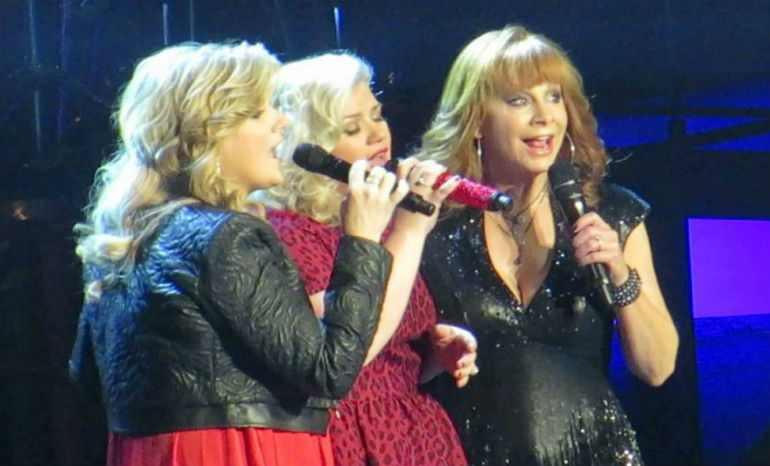 I don’t know about you, but one of my favorite things about Christmas music is that there are no rules. Songs can be up-beat or they can be simple ballads. Artists can sing whatever genre they want. Classic tunes can be covered and made to sound like completely different songs. And sometimes, artists from different genres even duet together. The possibilities are truly endless!

8. “White Christmas” by Michael Bublé and Shania Twain
Bublé and Twain changed up this usual classic ballad with a doo-wop/big-band version that takes the song to a whole new level.

6. “Have Yourself a Merry Little Christmas” by Christina Aguilera and Brian McKnight
I can’t think of something more 90s than Christina Aguilera and Brian McKnight. Unfortunately, Aguilera only included a solo recording of this song on her 2000 “My Kind of Christmas” album and not the duet. The two have performed this song live on a few occasions including on an episode of MTV’s TRL in 1999. If I ever see a petition to get a 20th anniversary studio version recorded in 2019, sign me up.

5. “Silver Bells” by Bing Crosby and Carol Richards
Whenever I think of Christmas music, Bing Crosby immediately comes to mind. This song makes me happy because I always envision Christmas-time on the festive streets of Manhattan, whether that be in Herald Square, Bryant Park, or Rockefeller Center.

3. “A Willie Nice Christmas” by Kacey Musgraves and Willie Nelson
Musgraves and Nelson have always been country pioneers by releasing music that truly sounds different from that of other country artists. This Hawaiian-sounding Christmas tune is no different. It’s fun, quirky, and my favorite part? In true Willie fashion, the lyric “May we all stay higher than the angel at the top of the tree.”

1. “Silent Night” by Kelly Clarkson, Reba McEntire, and Trisha Yearwood
While this trio may seem unlikely to some, Clarkson, McEntire, and Yearwood have performed together on numerous occasions. They recorded the tune “Softly and Tenderly” for McEntire’s 2017 album Sing It Now: Songs of Faith & Hope and also, my #1 Christmas collab, “Silent Night” for Clarkson’s 2013 Christmas album Wrapped In Red. In December 2014, I attended Clarkson’s Miracle on Broadway charity concert in Nashville, in which McEntire and Yearwood joined Clarkson on stage to sing “Silent Night.” Whether on the record or live, the trio’s voices blend together perfectly. They are true powerhouses yet also make “Silent Night” sound angelic. This is one of my favorite collaborations ever and let’s just say I wouldn’t be opposed if they released an album together a la Dolly Parton, Emmylou Harris, and Linda Ronstadt style.
“Silent Night” off of Clarkson’s Wrapped In Red

“Silent Night” live at Kelly Clarkson’s “Miracle On Broadway” in 2014: