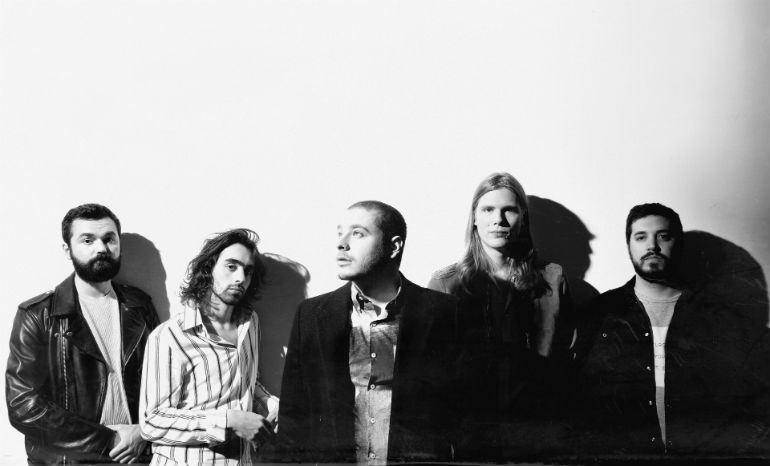 New York City indie rockers, The Chordaes, have had quite the year with the release of their new EP In Itinere. The soulful, atmospheric rock and roll journey of the band’s music and style illuminates each track on the album, proving that this is certainly just the beginning for The Chordaes. Soundigest had the opportunity to speak with the band’s songwriter and lead vocalist/guitarist Leo Sawikin and talk about his songwriting process, musical influences, and opinion on the NYC music scene.

Congrats on the release of your new EP In Itinere! If you had to pick one song off the release that describes your band to give to a new listener, which one would it be and why?

I’d say the track “California” is the best representation of our style. It is one of our most musically and lyrically complex songs. “California” is the song that in a way gave closure to all the other songs while also giving an idea of where we’re headed next.

Your music is really atmospheric and includes a lot of unique sounds and technical aspects. What is your songwriting process like and how do you express these ideas in the recording studio?

I usually write by myself with an acoustic guitar. I start with a chord progression and a feel then play it over and over again until I start hearing a melody. Then I will show our producer, Marc Swersky, and get his opinion on it. Marc usually figures out how to incorporate drums and bass arrangements into my feel, chords, and melodies. Then our sound engineer, Joe Demaio, uses his encyclopedic knowledge of sound to recreate the sounds we imagine. On our latest EP we brought in some great session musicians—Charlton Pettus  (Tears For Fears), Todd Caldwell (Crosby, Stills & Nash), and Alex Brumel (Ron Pope)—to work with us on the rest of the arrangement.

I see a lot of attention to lyricism in your music as well. Personally, which part of music do you think is more telling, lyrics or the music? How do you think this affects the way your band writes and presents your music?

I’ve always felt that lyrics are almost secondary to making good music. Music, by nature, is a surreal art form that relies on expressions that are not as exclusively human as something like language. When I write, everything is built around the music. The words are always an extension of the music, never the other way around.

You have quite a presence in lower Manhattan, playing regularly at iconic venues like The Bitter End and Bowery Electric. Have you found the East Village and it’s music scene to inspire you at all? What have you taken from your time there?

My honest opinion is that good rock music is not easy to come by in New York City. There is a lot of good soul and hip hop and rap music, but the rock world of NYC is dominated by punk bands, Velvet Underground emulators, and other mosh pit type bands that sound more or less the same. If anything it’s inspired me to make music that is completely different from all of that stuff. I find the music scenes on the west coast, north Midwest, and in the south to be much more fascinating and diverse at this moment.

Which songs of yours do you think connect most with audiences during your live performances?

People seem to connect a lot with “What Do You Want From Me,” “The Last Time,” and “I’m Free” the most in the sets we’ve played so far.

Speaking of legendary venues, unforgettable musicians like Bob Dylan and Jeff Buckley have taken the same stages as your band. Are artists like these some of your influences? What musicians inspire your songwriting?

I’ve never been crazy about Bob Dylan, but I think Jeff Buckley is awesome. I wouldn’t say either is much of an influence on me though. I would say Brian Wilson, Burt Bacharach, Paul McCartney, and Thom Yorke have had the most influence on my music up to this point.

Musicians in New York City almost always have the most interesting stories from living and performing in such a unique place. Do you have any experiences that have shaped or highlights your music career?

I don’t think the fact that I’ve grown up in New York has had much of an impact on my music. Most of the experiences that make me want to write are the type of experiences that could happen anywhere and transcend where we come from.

With this killer new EP out before the year end, what are your upcoming plans for 2018 and what can we expect from The Chordaes?

In 2018, we’ll be releasing our next single called “Something New” and we’ll be heading back into the studio to record our single following that. In addition, we hope to start playing some shows/touring around the country.