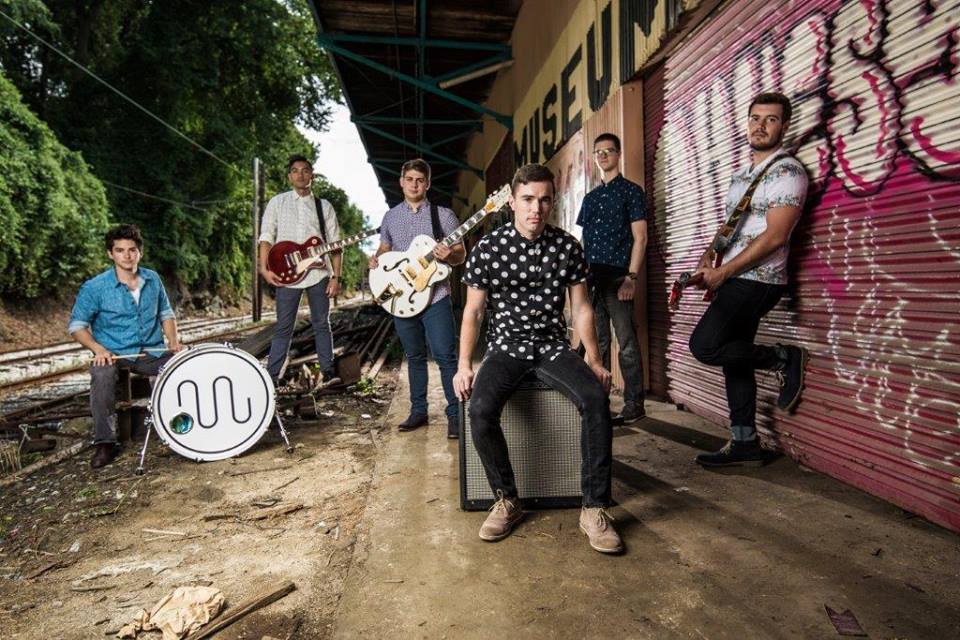 DC grown sextet Sub-Radio is kicking off their New Year in an extremely creative way with their festive EP Holiday Hangover. Covering modern Christmas jingles and acing an original New Year‘s Eve jam, the band closes 2017 on a particularly high note. After following up their debut 2016 release Same Train // Different Station with unforgettable singles this year, Sub-Radio is ready to dive into album number two in 2018. Soundigest got to ask bandmates Barry and Adam a few questions about covering Fall Out Boy and Ariana Grande, writing an original holiday track, and their ups and downs of 2017!

You guys are ending 2017 with a very spirited holiday EP titled Holiday Hangover. Why did the band decide on releasing a holiday EP?

Barry: Earlier this year we had a massive brainstorming session. We told ourselves that we would commit to coming up with the most out-of-left-field ideas for the band. One of those ideas was a holiday EP. It was new and refreshing to take a spin at something we’ve never done before, and we think that “Holiday Hangover” gives off that refreshing feeling in regards to the season.

Along with an original track, you cover some modern Christmas hits like Ariana Grande’s “Santa Tell Me” and Fall Out Boy’s “Yule Shoot Your Eye Out”. There are endless amounts of Christmas songs out there, so what drew you to these artists and songs?

Adam: In a funny kind of way, that Fall Out Boy matches the feel of “Holiday Hangover”. It’s a holiday song, yes, but also very anti-holiday-zeitgeist in being defiant and selfish and kind of bratty. I think everybody has someone they don’t want to come home for Christmas. And “Santa Tell Me” is an A-Level bop, a bop of the highest order. This is the 2010’s “All I Want For Christmas Is You,” and we had to put our spin on it.

How do you approach recording covers in comparison to recording original tracks?

Barry: Regardless of cover or original, we want to make sure that what we record is something that we can be proud of. Going into the studio for this holiday EP felt no different than recording the past 6 singles, despite the two covers. We just grinded it out in Matt’s (our guitarist) basement ​till we felt ready to record each song, and then grinded it out in the studio till we felt like we couldn’t do any better with each mix.

The holiday EP also has an original Sub-Radio track called “Holiday Hangover.” Did the process of writing this festive song differ from your other lyrics or tunes? Where did you draw holiday inspiration from?

Adam: It can be dicey, I feel like, writing a “holiday song” because there’s this whole world of cliches and tropes that you can get drawn into very easily, and all of a sudden your “original” song is about trees and presents and chestnuts and you’re boring. We hate boring. So we picked a less-loved musical holiday, New Year’s, and wrote about the inevitable come-down. For me NYE is a wash as a holiday. It builds to a climax where nothing actually happens, and there’s so much expectation and promise that can’t feasibly be fulfilled. It’s disappointing before it even happens. Which I guess is what “Holiday Hangover” rebels against, gently.

You also have been releasing some really great singles throughout 2017, which show strong growth for the band and your sound. What has it been like working together to create this next chapter of music for Sub-Radio? Have you made any changes in your songwriting process?

Barry: It’s been filled with so much joy and excitement! With every song we finish comes this wave of self-accomplishment and positive energy which we kinda just take and carry with us into writing the next song.  We’ve been riding that wave, jamming weeknights and weekends in ​M​att​’​s basement until we felt each song was done. The process hasn’t changed, but I think you’ll be able to hear just how much fun we’ve had creating new sounds for our next project.

What can you tell us about your upcoming project for 2018?

Adam: We’ve taken what we loved from those rapid-fire singles and just amplified the hell out of it. We’ve been diving deeper into the pseudo-tropical/campy side of Sub-Radio and what came of it is a collection of our favorite dancy island-flavored stuff that I hope our fans really love. It’s been hard the past couple years to be unapologetically exuberant? I feel like? But we want to provide a little slice of that.

Looking back on your personal highs and lows of this year as a band, what would you say have been the most challenging and memorable moments?

Barry: As a collective, I’d venture to say that playing Firefly this year was an ultimate high.  Being a part of something so large was really breathtaking, and I think that seeing Sub-Radio amongst the line-up had us in awe. On the flip-side, the singles that we released on a monthly basis really wore on us. We were playing shows two or three times a week, and finding the time to write and record while maintaining our individual lives was taxing on all of us. Despite that, the challenge of releasing a single a month really helped us develop and grow as a band. It showed us that we can do just about anything we put our collective minds to.

What are you most excited for as a band going into 2018?

And finally, what did you ask Santa for Christmas this year?

Barry: Flowery crop tops for the boys that wanna show off those sub-radio bods and matching onesies for the rest of the guys who like feeling extra comfy on and off stage.