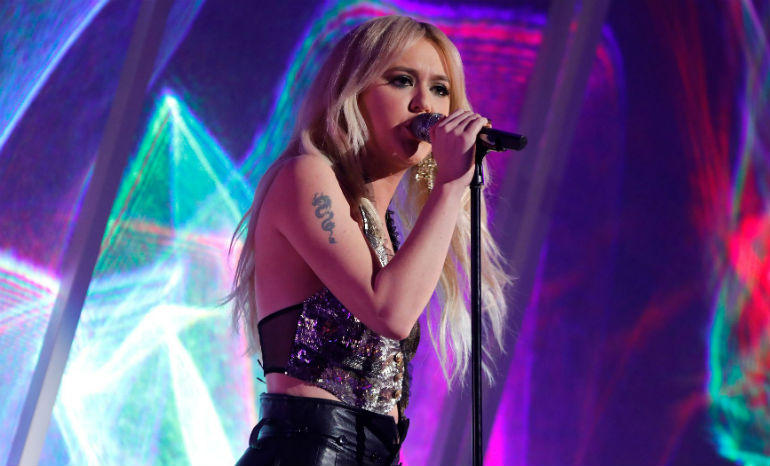 Chloe Kohanksi of Nashville, Tennessee was crowned the winner of season 13 of NBC’s The Voice on Tuesday, which was surprising to, well, no one. Deemed a front-runner from her first performance during the blind auditions back in September, Kohanski dominated the iTunes charts week after week and stole the hearts of everyone watching.

The 23-year-old rocker beat out everyone else in the competition, including her fellow finalists, 16-year-old folk crooner Addison Agen, pop-soul powerhouse Brooke Simpson, and true country singer Red Marlow.  Giving coach Blake Shelton the win, the country superstar has now won six seasons, and Kohanski is the third stolen artist to win the singing competition, originating on Team Miley.

To celebrate Kohanski’s well-deserved win, here are her defining moments on the show:

Singing Fleetwood Mac‘s “The Chain,” three out of four judges turned for her unique and raspy vocals. “I think you can be in the finale,” Shelton declared. First impressions can mean a lot, and fortunately for Kohanski, hers blew the coaches away.

The young rocker slowed things down for the Knockouts, bringing Stevie Nicks‘ “Landslide” back to its roots. Arguably her most mesmerizing moment on the entire season, mouths were left open for the entirety of this performance.

Kohanski’s effortlessly cool rendition of the Dido hit definitely convinced anyone who may have been second guessing her potential that she truly has the necessary charisma to be a star. Lost in her performance, the singer was in her own little world for 2.5 minutes.

It’s not easy feat taking on the Bonnie Tyler, but somehow the Nashville-native managed to make her cover of “Total Eclipse of the Heart” our favorite version of the classic song, bringing you back to the same energy seen during her audition.

Clad in red leather head to toe, Kohanski emitted nothing but fun during her performance of Blondie‘s “Call Me.” If you missed this during the lives, it is highly recommended that you watch it NOW.

What better fit for this voice than a Kim Carnes song? Channeling her inner rocker, Kohanski embodied the classic “Bette Davis Eyes” perfectly.

When the famed rocker Billy Idol and up-and-comer Kohanski team up, magic happens. The two took on Idol’s “White Wedding,” fulfilling one of Kohanski’s dreams.

Finally, we have Kohanski’s original song which premiered during the finale on December 18. A hauntingly beautiful track, it fit her voice perfectly. We can’t wait for her album to come out.

One thought on “Chloe Kohanski’s The Voice Highlights”