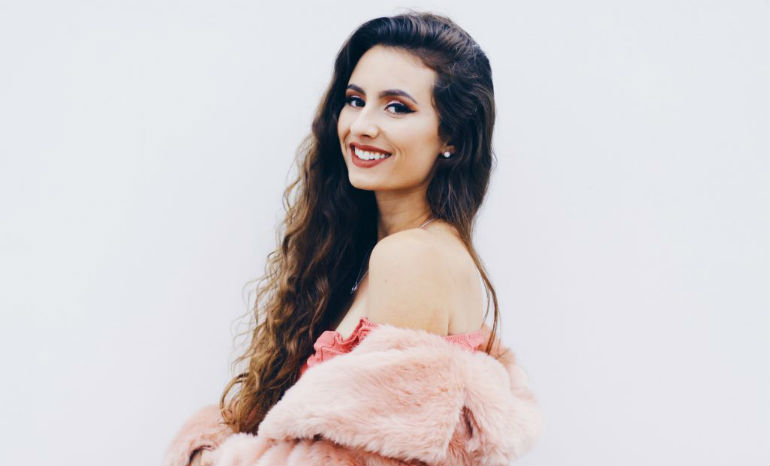 L.A. pop singer-songwriter Madi Rindge released her first single “Summertime” while studying music business and performance at NYU. “Summertime” was picked up for film and TV placements, aired on radio stations and even landed a spot on Ellen Degeneres‘s “EllenTube.” Now, she’s back with her latest single “Perfect,” and she stopped by to tell us about her latest projects and the inspiration behind “Perfect.”

Hey Madi! Congratulations on your new single, “Perfect.” The song is a message to young women that you don’t have to be perfect to be happy. What inspired you to make this song?

Thank you so much! So about a year ago, I finally left a toxic relationship. I put up with emotional and verbal abuse and stayed quiet for too long. When I freed myself from that relationship, I had a lot of time to think about what was making me unhappy and why. And I realized it was that women have unrealistic expectations to meet and I was fed up with having to meet those. I was so fired up, that I sat down and wrote “Perfect.”

We are taught at a very young age the idea that women have to be perfect. I read a quote recently that I feel really captured the message of this song. It said, “In a society that profits from your self-doubt, liking yourself is a rebellious act.” And “Perfect” is my way of rebelling; of influencing people to think about themselves in a way society doesn’t teach us to.

I almost always start playing chords on the piano that represent how I’m feeling. Then I start singing melodies over that and write lyrics. As soon as I have a song that I feel is melodically interesting and lyrically different, I bring it to a producer and help co-produce the song!

“Perfect” is a follow up to your last single, “Just One.” Can you tell us about the meaning behind that track?

I wrote “Just One” last fall when I was questioning certain relationships in my life – starting with the one I was in with my boyfriend at the time. I was trying to figure out which relationships made me feel good and which ones didn’t. And I realized some were making my life harder, complicated, and more stressful and I didn’t need that. That’s when I started putting all of my energy into practicing self-love and prioritizing the right relationships. The idea of needing “just one” person — like myself — to love me for “everything I can and can’t do.”

Just One is the name of your forthcoming EP coming out in April as well. What do you hope listeners take away from listening to this project?

Yes, it is! And I can’t wait until April. I hope listeners will know my story and be inspired to make a change in their lives if something isn’t making them happy. It’s not easy, but it’s worth it.

I want people to be themselves no matter what, and find other people in their lives that fully support that. It’s difficult to let go of the things that don’t make you feel good, especially if you’re used to them. And a lot of the time we don’t even know they’re making us unhappy! I know what that’s like all too well.

So I want people to think twice about how they feel and why. It’s important to take a step back and give yourself the love you deserve. Life is too short. We have the choice to be happy, so I hope I inspire you to choose that for yourself!

You’re hyping up your following for this release in a really unique way. Can you tell us how you’re counting down to the EP’s release?

Ahh, thank you so much! I decided to go with the theme of Just One by releasing one single on the first of every month until the EP drops on April 1, 2018. I started November 1 with “Just One,” December 1 with “Perfect,” and next up on January 1 is “Somethin’ On Ya,” which I’m so excited about! I do contests, giveaways, previews and more on my Instagram @madirindge, which helps my fans get really excited!

How did you come up with the idea?

I wanted to do something different but something that went with the theme of the album. Since listeners tend to get excited about singles these days, I decided to let them in on part of the project by releasing one song per month. By the time the album drops they’ve had a chance to hear at least one of the five singles and will be more likely to want to listen to the album the whole way through. Familiarity makes people feel like they’re a part of the project and that’s what I’m hoping for!

Will there be any music videos for the tracks?

Yes! I won’t say what I’m scheming, but I have music videos in the works!

What can we expect from you in 2018, besides the release of Just One?

I’m excited to tour and perform even more in LA, where I was born and raised. I have so much fun creating art and including people to be part of the dream, so I’m stoked to be growing with my fans! Thank you so much for having me and I can’t wait to be back!