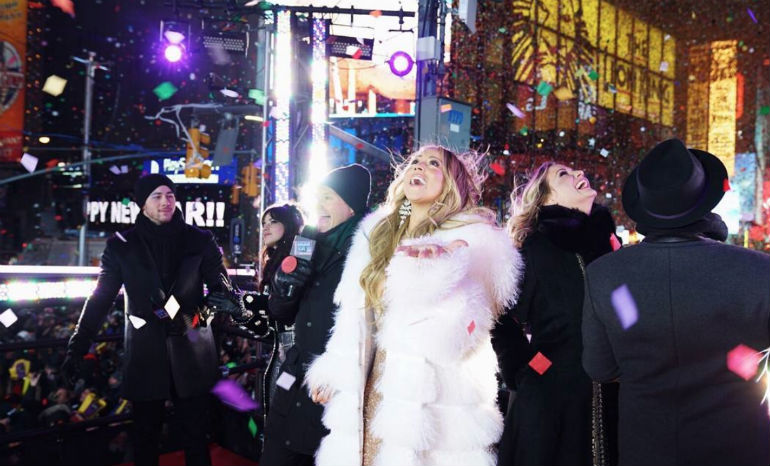 Before we said goodbye to the general craziness that was 2017, we had some performances by our favorite artists to look forward to. To round out the year, just a few of our faves performed in the the heart of Times Square, while others did scattered NYE performances across the country.

In the midst of the bone chilling weather in New York, the lineup included Nick Jonas, Camila Cabello, Mariah Carey, and Sugarland.

Camila sang her smash hit “Havana,” and TBH, say she looked amazing and totally killed her performance from start to finish. Earlier in the day, Barack Obama listed “Havana” as one of his favorite songs of 2017 and Camila was ecstatic.

Does anyone remember the iconic moment when The Jonas Brothers performed in Times Square in 2009? Well, this New Year’s Eve Nick Jonas returned to the stage and performed a medley of his hits, including the Golden Globe nominated song “Home,” from Ferdinand,  “Closer,” and, of course, “Jealous.”

However, the moment that we all had been been waiting for was Mariah Carey’s return to the stage after her super embarrassing lip-syncing fail last year. Ms. Carey certainly redeemed herself this year with her take on “Hero” and “Vision,” and even gave us some hot tea to last us through 2018.

We also had a slew of performances in Hollywood including BTS, Shawn Mendes, Charlie Puth, Kelly Clarkson, and so much more.

Kelly Clarkson had a fantastic year and performed a trio of her hits, including “Love So Soft,” “Stronger (What Doesn’t Kill You),” and “Whole Lotta Woman.”

In Las Vegas, Britney Spears ended her last residency show with a bang and performed “Work Bitch” and “Toxic” for viewers across the country.

As you can see, the night was full of amazing performances all across the country as we waved goodbye to 2017 and welcomed in what’s sure to be an even bigger and better year. Overall, it left us with some pretty high expectations for music in 2018, and we can’t wait to top it!