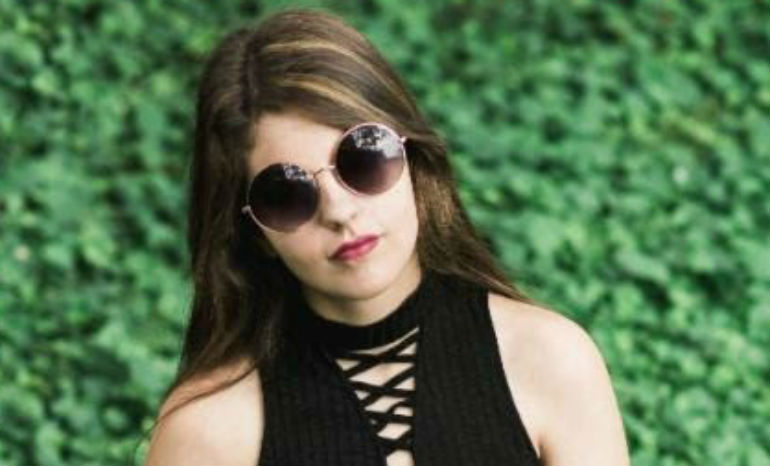 This New Year, be on the lookout for Maggie Schneider, a new artist hitting the scene with her EP, Tinted Glasses, which is set for release on January 12th.

Produced by Rian Dawson of All Time Low, Tinted Glasses offers a look into the perspective of a strong optimistic female, learning lessons and navigating through life. Maggie is a singer/songwriter who’s also a talented piano, ukulele, and tambourine player. If that’s not impressive enough, she also plays “a little” bass. Growing up around music and theatre, Schneider was introduced to all kinds of different bands and artists.

“I was inspired my whole life to pick up a guitar and a microphone,” said Schneider.

Not only is Maggie rocking the music scene, but she’s also a student at the Savannah College of Arts Design, majoring in writing.

“I love talking about music and writing about it, if i weren’t in the music, or on stage rather, i’d definitely take it in from the other perspective,” she said.

Although Maggie is largely inspired by All Time Low and State Champs, she did add, “I also love the Jonas Brothers. They were the first musicians to really inspire me to write my one songs.”

Setting an example for girls everywhere, Schneider recently put out a video for her newest single, “Chuck Bass.”

She said of her single, “I really wanted to write a girl power song because I feel like we need more of those. Especially in these times right now, it can be kind of sad looking at the news and seeing everything that’s going on. But I think if girls stick together and if we remain positive and create things that are about empowering women rather than putting them down, I think that’s a really important thing.”

This “sassy little song” is just one of the four on the new EP, which also includes a song called “Tinted Glasses,” about viewing the world through an optimistic lens. Describing this as a more serious song, she hopes to get personal with her listeners.

She said of the song, “Usually i’m a very optimistic person and I look at the world with a very rosy perspective and so I kind of wanted to show the juxtaposition between being an optimist and wanting everything to work out with this person, but also kind of feeling lost and hopeless like the song talks about.”

The EP also features “695 North Avenue,” a song that pays tribute to the venue that allowed Schneider to grow. Most of all, it’s a track that Maggie would say describes her as an artist and represents where she started.

“I grew up at the old Masquerade location and it was really how i started playing music.  The venue’s booking agents and everyone from the security guards to the interns were so welcoming to me, and it really gave me a place to grow as an artist,” Maggie said.

Along with the aforementioned tracks, fans can listen to “Break,” which features one of Maggie’s best friends and singer/songwriter, Alex Crain.  Schneider compares this track to “Tinted Glasses” and it’s a must-hear on the EP.

For 2018, Maggie is hoping to get more content out to fans, play more shows and write more music, and to be honest, we’re hoping she does, too!

With shows in Atlanta to start of the new year and some really exciting news on the horizon,  Maggie Schneider is definitely one to look out for this upcoming year! Check out her video for her new single “Chuck Bass” HERE:

Let us know what you think of Maggie’s single in the comments or tweet us with your thoughts @soundigest!