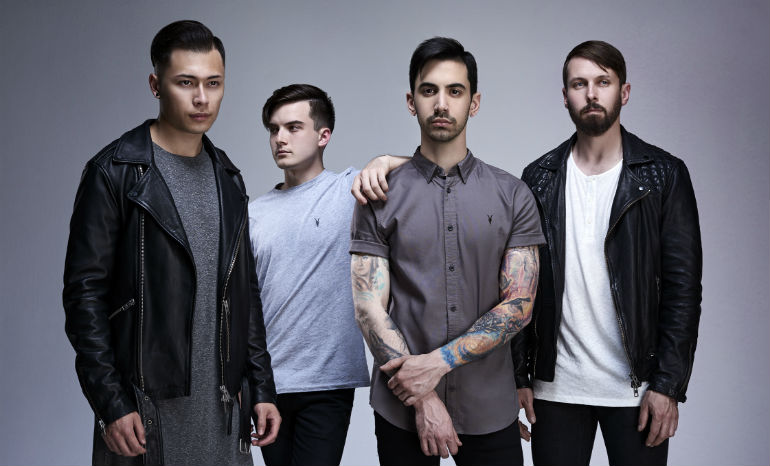 Soundigest recently had the opportunity to chat with Vespera. Led by vocalist and songwriter Jonathan Wolfe, Vespera recently released the music video for their new single, “Paradise.” The band partnered with The Jed Foundation, an organization that helps teens and young adults dealing with depression and thoughts of suicide, for the video in an effort to raise awareness for mental health. Jonathan also penned a powerful essay about the story behind “Paradise,” his own story, one that he calls “far too common.”  We chatted with Jonathan about the new video, his essay, and what to expect from Vespera in 2018.

You recently released the music video for your song, “Paradise,” which was a joint effort between your band and the Jed Foundation (an organization that helps teens and young adults dealing with depression and thoughts of suicide). Tell us a little bit more about what the song and video mean to you.

The video was inspired by a myriad of both vicarious and personal experiences tied together to create a visual dialogue regarding mental health, addiction, and suicide. I wanted to create something that spoke out to those who are suffering in silence by using my own story to connect with them. I’m hoping to inspire a more positive mindset and create a safe place where people can talk about what’s going on in their minds without fear of judgment or ridicule from others. I want to remove the taboo and social stigma that’s been built around these subjects so that people can take the proper steps to seek the proper help they need and mend their wounds.

‘Paradise’ is now available for purchase and streaming on all music platforms. This song is for you; we hope you enjoy.

Jonathan, your essay about the song and the story behind it is extremely powerful and we commend you for sharing your story. What do you hope people will take away from your story?

Thank you, I appreciate that. My goal is to help kickstart a much-needed conversation regarding mental health. Currently, there is such a massive stigma that does not allow people who are hurting in silence to speak out and find the help they need and deserve. We need to be kinder towards each other and learn to be selfless. If we consistently strive to make positive impacts in the lives of others, then we’ll be a step closer towards making the world a better place. There is never anything wrong with seeking help from others or making the decision to go to therapy; in fact, we should celebrate the bravery it takes to make such a necessary decision.

Your upcoming album, The Thoughts that Plague You, is set to be released this year. Can you give us any hints as to what to expect?

I want this album to take you on a small musical journey where you can put on a pair of headphones, close your eyes, and escape the world around you for about an hour. Between “Bloom,” “Obsidian Dreams,” and “Paradise,” you can assume that we’re a heavier rock band, but I wouldn’t be so quick to confine us to just one genre. My long-term goal is to write music that transcends genre. The Thoughts That Plague You serves as our first step leading in that direction. This album’s mood encapsulates the myriad of emotions that I underwent before and during the creation of the album. Lyrically, I’ve decided to wear my heart on my sleeve and put the skeletons in my closet on display. You can expect this to be my most honest and heartfelt work thus far, and I’m looking to continuing to push the envelope with everything we create.

The Thoughts that Plague You was originally set to be a 5 track EP. Many artists release EPs to give fans a taste of what to expect from an album and others, like Vespera, choose to release an album over an EP. Ultimately, what made you decide to scrap the EP in favor of a full-length album?

Ever since my hiatus from music in 2015, I swore to myself that if I came back, I’d do everything completely different. I had done so many EPs in the past and I wanted to do something I had never done before. I walked into the studio with 7 songs and no one could pick two songs to remove, so I decided to just pull out what was left of my savings account and created a 15 track album as my debut.

How does “Paradise” differ from your earlier singles “Bloom” and “Obsidian Dreams?”

I’d say “Paradise” is one of the more upbeat songs on the record, leaning less on the heavy side. It’s very rock-oriented compared to songs like “Bloom” and “Obsidian Dreams,” which contain heavier segments and a bit of screaming. It’s one of my favorite songs on the record, to say the least.

A few behind the scenes moments from the filming of ‘Paradise’.

Genre-bending Rock. We pull influence from multiple sub-genres of rock and blend them together to create our own sounds.

When you’re not jamming out as a band, what do you each like to do for fun?

As a group, we’re usually standing around in the living room geeking out about music, bowling, or watching a good movie. We never fail to keep each other entertained when we’re all together, haha.

What are some secrets or fun facts about each of you that fans may not know?

If you want secrets, then listen to the album.. that’s where I hid all of my secrets. 😉

Do you have any upcoming tours or shows planned for this year that fans can keep an eye out for?

Nothing that we can announce yet, but we’re extremely excited for 2018 it’s going to be a very active year for us. If you’re following our socials, you’ll see it all as soon as we’re able to share! I’d hate to make a promise we couldn’t keep.

Is there anything else you’d like to add that we may not have touched on?

We’ll be announcing the pre-order to our album very soon alongside another very unique song on the album titled “Fading Light.”

Check out the “Paradise” video below.