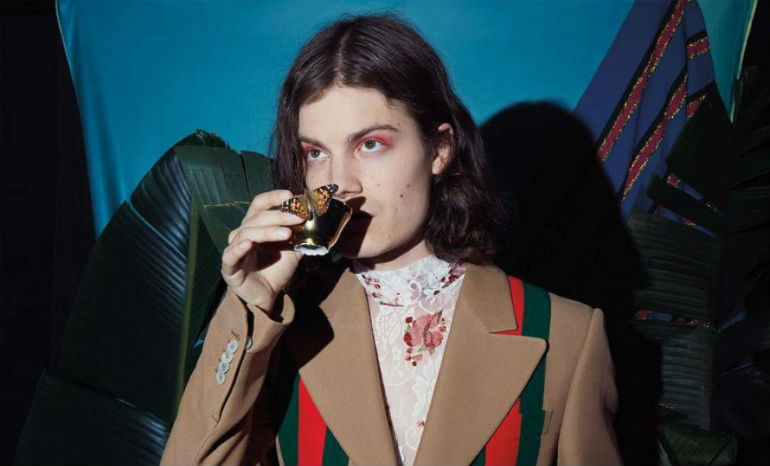 In comparison to Borns’ first debut album of 2015 Dopamine, Blue Madonna picks up right where it left off to transition fans into the new wave of BØRNS. With every project he has produced, there are always consistent themes of lust, love, morality, and spirituality present. Blue Madonna dives deeper into these themes as Borns analyzes his vulnerability, faith, and spiritual connection.

Borns also chose to reinvent himself a bit on this album by creating a colorful aesthetic to match the vibrant production on this record. On the album cover, he is photographed sporting a green and red striped Gucci suit, crimson eyeshadow, and his bluntly cut brunette locks. Since his early days, Borns has remained brilliantly androgynous with his ravishing sense of style and vocal talent.

Borns starts off Blue Madonna strong with “God Save Our Young Blood.” This electric-soul single is refreshing, dramatic, and bold. The premise of this song focuses around salvation as Borns and Del Rey question if God can save them. In the second verse Borns mentions “We can never stop movin’, we see nothing but the green lights.” He confirms to Genius that he feels like “we’re living in a time of increasing speed and there’s no slowing down.” Borns acknowledges how precious time is and starts to fear his own mortality. This theme is similar to the subject at hand of the second track “Faded Heart” when he claims, “But it feels just like I’m running out of time.” These dark lyrics greatly juxtapose the overall tranquil sound, making Borns’ music captivating for first-time listeners.

As one listens further into Blue Madonna, Borns uncovers a more vulnerable, delicate side of himself we’ve never met before. The emotional ballad “I Don’t Want U Back” breaks down each stage of a long awaited break up. Borns carries us through the story of deciding to leave his unfaithful lover, and what valuable lessons he learned along the way. “I Don’t Want U Back” stands out from the rest of his work because he rarely opens up about heartbreak. Many of his other tracks from both Blue Madonna and Dopamine focus more on the positives of love, rather than the negatives. However, this track is particularly important since it is not only relatable to many, but also inspiring. Borns embodies self-empowerment by recognizing his self worth, and not putting up with situations he is unworthy of. As Borns establishes his phenomenal personality and talents on the album, this song leaves us all questioning who would do Garrett Borns so dirty like this…?

“I Don’t Want U Back” follows directly behind “Second Night of Summer.” The context of this song heavily relies on how Borns can’t take any more trauma to his already faded heart. He narrates another story about his love interest who carelessly moves away for the summer with his his heart “in a carry-on.” Near the bridge of the song, Borns expresses hysteria as he puts the girl in her place, claiming she’s “Throwing me that shade like I’m not cool enough.” In all seriousness, this track is a saucy bop!

The order Blue Madonna’s tracklist follows is important because it shows the fluctuation of feelings within Borns’ headspace. One song can express the dramatic sarcasm of Borns reminiscing on a lighthearted fling, while the following song digs deep into the emotional details of breaking off a long-term relationship. Borns takes on many different angles of love and faith in this album, and the fact that he can pull off all of these complicated themes into one project is both satisfying and impressive.

Toward the end of the album, Borns surprises us all with Del Rey’s contribution to the backing vocals on the title track “Blue Madonna.” The whole vibe of “Blue Madonna” is very sultry between the moody synthesizers and smooth lyrics. The inspiration behind the song and album title refers to Carlo Dolci’s painting from the Baroque period, named Blue Madonna. Borns said in an interview with Facebook that when he began working on the album, he noticed many beautiful murals on the walls of the recording studio. He always kept the aesthetic of this artwork in the back of his mind, and eventually he came across Dolci’s Blue Madonna. In that moment he thought that the spirit of this painting would tie the album together very nicely.

It is safe to say that BØRNS has done it again! Blue Madonna is the breath of fresh air that the fan base desperately needed. Nearly two and a half years after Dopamine, Borns successfully kept the themes in his music very consistent, but still managed to change up his overall visual and musical aesthetic. Blue Madonna is a classic masterpiece that will definitely be played on repeat for years to come.