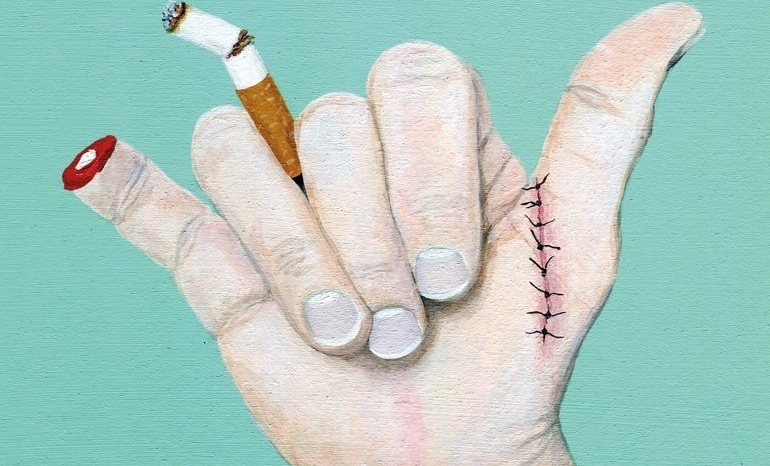 Everyone’s favorite Midwest math-rock band just put out their fourth studio LP and it does not disappoint. Tiny Moving Parts is a band known for their consistency in the sense that throughout the course of their albums you’ll want to simultaneously jump around and cry– Swell is no different.

Their 2016 album Celebrate allowed the familial group (brothers Matt and Billy Chevalier and cousin Dylan Mattheisen) to become more accessible to the general public and Swell is an extension of that plus some. Equal parts innovative and invigorating, this emo-revival record contains 10 tracks that could easily be played on college radios across the country, infused with wit, woe, and well- “Wildfire.”

In typical Tiny Moving Parts fashion, the album starts off with Dylan screaming, “Send applause to your heart strings!” on the first track, “Applause,” followed by infectious riffs and lyrical hooks. Exploring the theme of patting yourself on the back for still breathing and being here despite everything that has occurred up to this moment, the Benson, Minnesota band wasted no time introducing their latest masterpiece.

The next two songs, “Smooth It Out” and “Feel Alive” continue with the reoccurring theme stated by Dylan to Alt Press: Swell is about “Basically focusing on your happy brain cells in hopes that it’ll overcome your negativity like your doubts, your weaknesses, your fears.”

Next up we have “Caution,” which happens to be the first single released off of Swell along with an accompanying music video, which was featured in our Top 10 Music Videos of 2017:

Reminiscent of Celebrate, “Caution” is a satisfying reminder that TMP will continue to preserve their roots while concurrently evolving and unfolding their sound as a band.

“Whale Watching” and “Malfunction” proceed to demonstrate the math-rockers signature controlled chaos that can be found in all of their previous releases. Dylan’s vocals ingeniously dance around the punk-influenced instrumentals, creating an unheard symbiosis.

The record ends with my personal favorite, “Warm Hand Splash,” which may be my favorite Tiny Moving Parts song of all time. Comprised of so many components, an alluring dissonance emerges within the 3 minutes and 53 seconds of the track, supporting the lyrical journey Dylan takes us on. Via BrooklynVegan, he states, “‘Warm Hand Splash’ is about having someone special get taken away from you. I used an analogy of being a piece of trash at the bottom of a wishing well, who adores a coin that eventually someone steals from the water. With an important piece of your life missing, you’re trying your best to cope with it.”

Overall, Swell proves to be a successful release for Tiny Moving Parts, infused with their trademark “happy-sad” music, that makes you unsure if you should be dancing along or crying over a pint of ice cream.