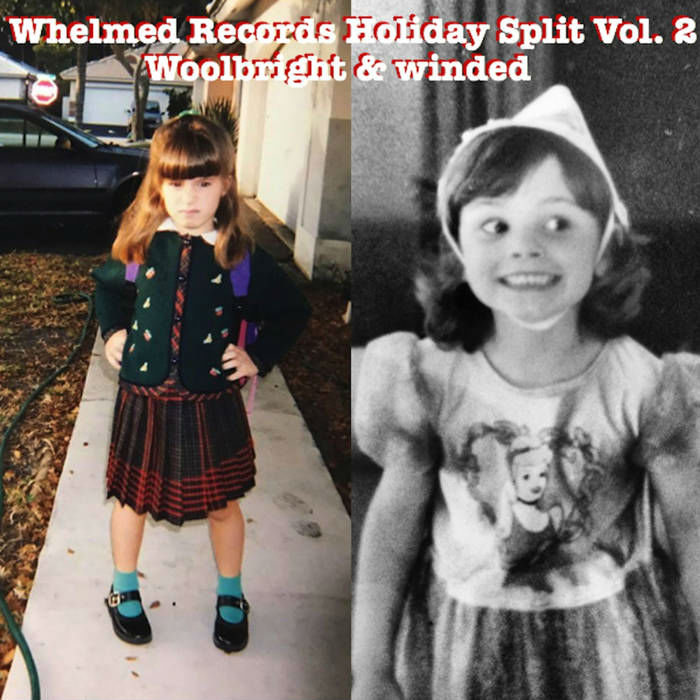 The second annual Whelmed Records Holiday Split recently arrived and it’s AMAZING! Indie/emo bands Woolbright and winded teamed up for this year’s split and you definitely need to check it out. It even has Death Cab for Cutie and Pile covers! Want to hear something even better than all of that? Proceeds go to Hurricane Maria victims in Puerto Rico.

Recently, I had the chance to speak to Thrin of winded and Candice of Woolbright about their music and collaborating on this split. Check out what they had to say below and don’t forget to listen to Whelmed Records Holiday Split Vol 2.!

What made you guys want to join forces and release a split together?
Thrin: Candice asked me to join her for this release and I couldn’t have been happier.
I’ve been wanting to release music with Woolbright for a really long time because I’m a huge fan of theirs!

Candice: I’ve been wanting to release music with Thrin for a while now. She is one of my favorite song writers!
Her music is so beautiful and chilling. I really wanted to release sad songs during the winter. I knew she’d be a perfect fit.

“23” and “Crossed Wire” seem to be a very personal ones. Were these hard songs to write? Is it easier to write songs that hit closer to home?
Thrin: “Crossed Wire” is a pretty personal song but I was able to write it really quickly. That doesn’t happen too often for me so I think that’s why I find this track pretty important.
I wrote it when I was feeling particularly disassociated and anxious to deal with how I was feeling.
The song is basically about how I experience disassociation so frequently that it messes with my sense of time/sense of the world around me.
It was easy to write because I couldn’t really focus on anything else at the time.

Candice: “23” was exactly what I needed to release. It felt like I had been holding on to something, a knot in my chest.
I sat down and started to write and immediately just started crying. I couldn’t play it without crying. I am a pretty open person so actually writing the music and lyrics came very naturally.

What are your writing processes like?
Thrin: Hmm. I usually crack open a seltzer water in my pajamas, mess around with the same 4 chords for too long, get frustrated, come back 2 hours later and write an entire song.
I use the notes app on my phone to write the lyrics down and usually record a rough draft of it on my phone once I’m done too.

Candice: Feel a lot and write.

Who are some of your inspirations for the songs released on the split?
Thrin: I was re-listening to Low’s album Ones and Sixes at the time and I think that inspired a lot of the instrumentation and vocal harmonies.
They’re one of those bands that bums me out but also makes me feel amazing and inspired.

Candice: The only inspiration for these songs are my sister. If it wasn’t for her, I wouldn’t be pushing this whole music thing as much as I do.

What’s up next for you guys in 2018?
Thrin: I’m putting out an album soon!!! But the details are a secret and also Woolbright and myself are playing a sick show in Tallahassee at Club Downunder on February 18 so that’s really exciting!

Candice: 2018, we (Woolbright) are writing new music. We have a few songs done already. We hit a 10-day tour in February, one of which we will be gigging with winded!
Heading up to Texas for some gigs in March. Also, planning a 10-day summer tour.
We are moving around quite a bit pushing Busybody Lazybones, our most recent album. Aside from that, we are all just trying to #chill.