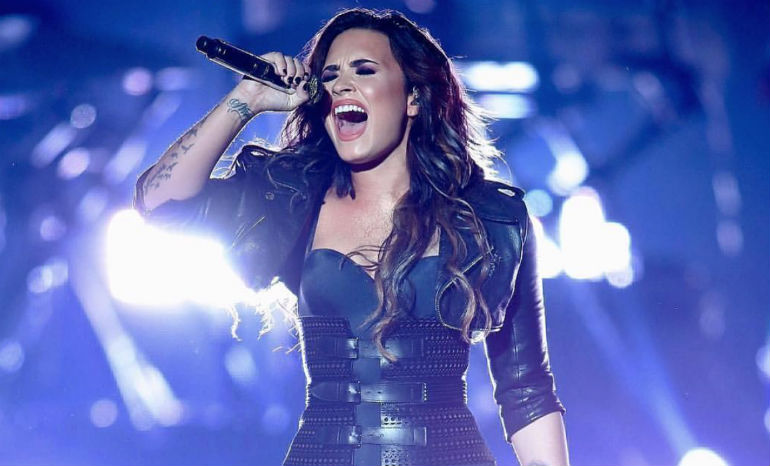 Demi Lovato fans! Help us choose songs for her set list on new upcoming tour! With a lineup including DJ Khaled and Kehlani, the tour is going to be HUGE. Lovato’s Tell Me You Love Me Tour will be making its way through North America and the star recently took to Twitter to ask fans what they want to hear on this tour. After running a poll and getting thousands of replies, Lovato was seeing mixed answers and called out for help once more.

She asks and she shall receive! Check out what we think the set list should be like for Lovato’s tour!

“Sorry Not Sorry” and “Cool For The Summer” are two of the biggest anthems and we want to be screaming those at the top of our lungs. We also cannot forget “Confident,” “Skyscraper,” and “Give Your Heart A Break.” All of these singles are staples for Lovato to perform.

2) Honestly, the entire Tell Me You Love Me Album

Lovato held nothing back on this last album that shares the same name as the tour. The album contains moving ballads such as “Only Forever,” “You Don’t Do It For Me Anymore,” and “Smoke & Mirrors” that we need to hear. There are also pop masterpieces like “Daddy Issues,” “Cry Baby,” and “Sexy Dirty Love.” At her intimate show held in New York City this past week, she performed the whole album minus one song and we hope to see this on tour. The whole album was made to be sung live and we definitely want to hear all of the new material.

Lovato has a lot of options to choose from as she has six solo studio albums under her belt. Fans would love to hear some of her old classics thrown in the mix for sure. Perhaps “La La Land” or “Trainwreck” from her debut Don’t Forget or the best tracks from Here We Go Again and Unbroken. If Lovato were to perform “This Is Me” or anything from Camp Rock in full, it would create a frenzy as the 2008 nostalgia comes creeping back in.

There are countless tracks in which Lovato shows off her incredible range and show stopping voice. Lovato is definitely one of the most talented artists today and her live performances put this talent on full display. Songs like “Stone Cold,” “For You,” “Warrior,” and others are goose bump inducing numbers that we would love to hear again. (Bonus: “Two Pieces” from her self-titled album should definitely make its way back to the set list.)

Many artists have collaborated with Lovato throughout the years and these songs sometimes do not make it to the live show. From her Latin song with Luis Fonsi on “Échame La Culpa,” “No Promises” with DJ group Cheat Codes, and “Irresistible” with Fall Out Boy, Lovato has done lots with other artists. With the huge influence of DJ Khaled, it would be amazing to see if some of these artists could make an appearance at some shows. Lovato has also done some really great covers in the past, such as “Stay” by Rihanna and “When We Were Young” by Adele so we would want to see more of those! Lovato recently noted she would love to cover “Never Be The Same” by Camila Cabello so maybe we will see that happen. Kehlani will be supporting this tour and if the two get to sing together, it would make each ticket even more valuable.

This tour is one of the most highly anticipated ones this year and we cannot wait to see what is in store for us. Lovato’s performances do not ever disappoint and we just know that she will create a set list that will result in an extraordinary show.

What do you want to hear on the Tell Me You Love Me tour? Let us know below or on Twitter @Soundigest !