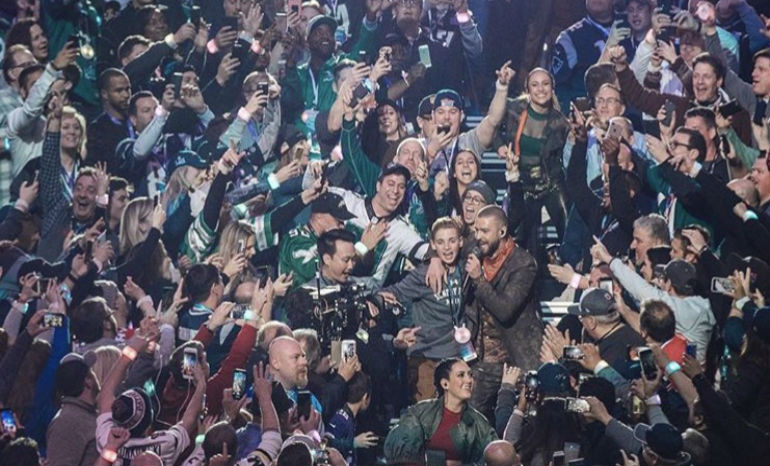 The Super Bowl has come and gone, and Justin Timberlake gave it his all in the Pepsi halftime show. There may not have been any surprise *NSYNC reunions or Janet Jackson wardrobe malfunctions, but there were definitely some details in need of recognition. Here are the top ten moments from the Super Bowl 52 halftime show:

In case Jimmy Fallon didn’t make it clear enough, the whole point of this show is to get you to want some delicious Pepsi. So, to kick everything off we were all invited to a super-secret underground Pepsi club, where Timberlake kicked off his Performance among a fantastical laser show. No need to worry though, after the camera tracked him through the club and up a grand staircase it was revealed; yes, he is in fact at the Super Bowl.

9. The Jacket Tassels and the Jungle Shirt

A regular old leather jacket definitely doesn’t cut it for the style of Justin Timberlake. The fringe on the coat is needed emphasize the Tennessee roots. The same could be said for the strange hunting outfit underneath, which was likely a reference to the coinciding release of the album, “Man of the Woods.”

SexyBack may have been the most anticipated section of Timberlake’s medley of hits, which is probably why the main stage was revealed along with it. As one of his oldest hits, it is worth wondering how many people yelled the lyric “Yeah!” at their televisions during the show.

How about some mention of the real heroes here? Don’t they deserve some recognition? Shouldn’t they get a spot in this top 10? The families and friends of the backup dancers were probably excited to see them on TV, but otherwise their only purpose was support and background aesthetics. Timberlake has his cast to thank for his classy appearance in the performance.

“Sure, you can be up front for Justin Timberlake’s halftime performance, but I hope you can jump on beat, and you better not get tired easily!”

Timberlake and his dancers broke it down directly over the NFL logo for this song. Their energy was high, and their moves were well rehearsed. In case you’d started to forget Timberlake could dance, this was a reminder.

4. The Swinging Microphone during “Suit and Tie”

Was the microphone-stand attached to the ground? Definitely. Would the producers risk a possible screw up in the middle of the performance? Obviously not. Even so, with just a little bit of suspended disbelief, Timberlake did make the trick look stylish. (Side note: Timberlake did do a microphone flip during “My Love,” and there is no faking that).

3. A Tribute to Prince/Turning Minneapolis Purple

There is some controversy in this tribute, with fans of Prince recalling a feud between him and Timberlake in 2006. As a result of this, some might consider the tribute inappropriate. However, had Timberlake not acknowledged Prince, in the very city where the music legend was born and raised, there would have been just as much push-back. It seems the tribute with “I Would Die 4 U,” followed by painting Minneapolis purple was the best and most respectful course of action.

These songs are the easiest to sing along to, and were combined to close out the night. At first the bit with the actual mirrors didn’t come off as very creative. However, when the colors for “Can’t Stop the Feeling,” were revealed I had to smile at the reminder of how much I enjoyed the movie Trolls.

To be fair, if you threw me next to a major-celebrity mid-performance and put cameras in my face that were broadcasting on national television, then I’d probably also become a human-meme. Hopefully the internet treats #selfiekid somewhat decently. Unfortunately for him he was rooting for the Patriots, but on the bright side he is in the most iconic selfie from the Super Bowl 52 Halftime Show.