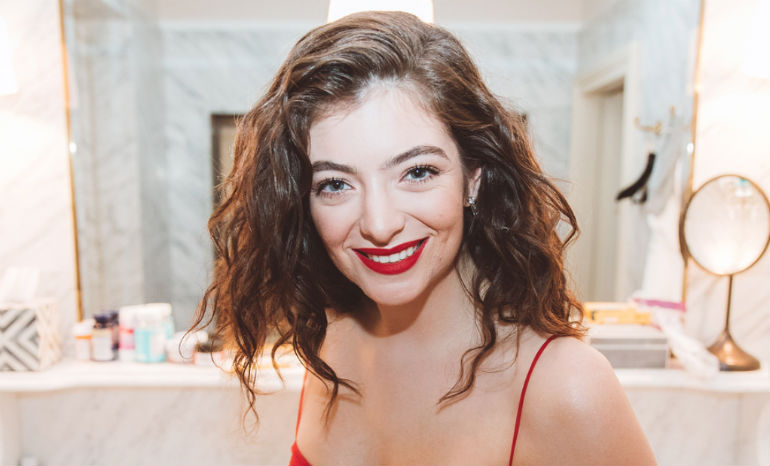 Being the only female nominee for Album of the Year at the 60th Annual Grammy Awards, Lorde encountered some controversy this year. Although Album of the Year was awarded to her competitor Bruno Mars, the New Zealand singer decided to stand tall and recognize just how many hearts she won over with her 2017 studio album Melodrama.

Allegedly, Lorde was the only nominee in the Album of the Year category that was not invited to give a solo performance during the show. In relation to this, Lorde caught the attention of many with a very meaningful fashion statement for the awards. She was photographed wearing a bold red gown with a note attached to her back. She proudly showed off her “version of a white rose,” which was an feminist excerpt taken from Jenny Holzer’s “Inflammatory Essays.”

Shortly after the Grammy Awards, Lorde surprised her fans by releasing a full page newspaper advertisement in The New Zealand Herald. The ad was thoughtfully handwritten by Lorde herself to thank her fans for “believing in female musicians.” It’s safe to say that her powerful choice of words was much needed to uplift ambitious females everywhere.

The note said, “Last night I saw a lot of crazy & wonderful things. I just wanted to say thank you, from the bottom of my heart, for loving & embracing Melodrama the way you did. My nomination belongs to you. Thank you, also, for believing in female musicians. You set a beautiful precedent!”

Along with the sweet message, Lorde added some fun notebook doodles and commentary about her big night. The cute little notes documented her honest thoughts like,“Jay-Z’s hands are really soft,” and “I met Stevie Nicks and almost cried.” Obviously, the 21-year-old never fails to keep it real with her fans. Her candid posts and honest statements are highly admired, especially during this huge wave of social media that particularly focuses on online image. Lorde sets the perfect example of how to be yourself and ultimately live your truth unapologetically.

Full-page letter from @lorde in today's @nzherald: 'Thank you, also, for believing in female musicians' pic.twitter.com/Z86VXCCpvl