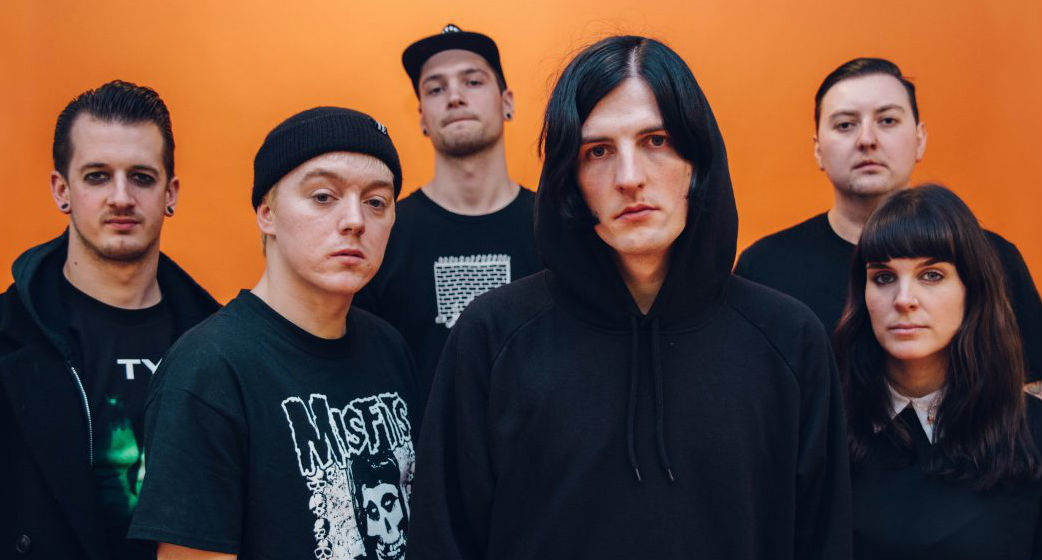 It’s time to join the Creeper cult. If there’s one band you absolutely NEED to listen to this year, it’s Creeper. Creeper is a horror/theatrical punk band from the UK, and they’re often compared to My Chemical Romance, AFI and Alkaline Trio, which yes, is a bit of an exotic combination, but you definitely will not regret giving them a listen. Recently, we had the chance to hang out with vocalist, Will Gould and lead guitarist/vocalist, Ian Miles before they headed over to their show at PlayStation Theater, opening for Neck Deep. Be sure to check out photos from Sarah Waxberg’s shoot with the whole band below and from their show that night HERE!

So your style of music has been described as horror punk and theatrical punk. I feel like if My Chemical Romance and Alkaline Trio had a baby, it would kind of be you guys! Where did you guys come up with your sound? There’s a lot of different influences in there.

Ian: Okay, so when we started the band, we obviously were going for an earlier AFI, Alkaline Trio. That’s where our minds were at when we started. Me and Will were in a band before this and we started off as a hardcore band and developed into that. Along the way, from there as well, we were getting into a wider field of music! Like Motown, and we really got into this guy called Jim Steinman, he writes like Meatloaf songs. He wrote for Bonnie Tyler! He replicates all those Motown stuff in a rock sphere!

Ian: So we started getting more influence by that. I think if I was to break it down, that’s what we wanted. We wanted those bands, but a rock opera version of those bands. You get what I mean?

Ian: It’s a ridiculous idea but it seems to be going more down that route now. More rock ‘n roll than punk rock, you know?

Yeah! So you guys are currently in the middle of touring with Neck Deep throughout the US. How’s the tour going for you guys?

Will: Tour’s going great! It’s really easy. We’re getting along really well with Seaway and with Speak Low! We’ve been getting drunk with them every single day! Neck Deep we’ve known for years. They’ve helped us out so much. When we were starting out, they took us out in Europe and in England. We’ve done two tours already, and this is our third tour. We’re kind of completing the trilogy of tours with Neck Deep now. It’s really, really fun! It’s nice and easy. Not hard work at all. We had Taco Tuesday the other day! Where all of the support bands put their riders together and we all got taco stuff and we had a big taco party! So yeah, it’s been great.

Good! That all sounds like a fun time. Are there any pros and cons of touring here versus the UK, since that’s your home base?

Wait, do you guys not have Taco Bell over there?

Ian: I KNOW! But the thing is, I never liked Taco Bell. I tried it in the UK and didn’t like it. But then I came over here and had to trial and error loads of different mixes to get the right one.

Ian: EXACTLY! They’re so happy to do that over here. In the UK you’re like, “oh can I have the 5 layer burrito with no beef and beans and rice” and they’re like, “no we only do the 5 layer!” But over here, they’re just like “yeah! We’ll do that!”

Yeah, they’re pretty accommodating over here with it.

Well, I’m a vegetarian so I get potatoes with everything…

Ian: That’s my thing right now – 5 layer beef burrito and I take the beef out and put in rice and potatoes.

Ian: On Warped Tour, we got given loads of vouchers. So we had Taco Bell everyday!

That’s awesome! So, I feel like your sound really sets your band apart from others right now in the scene. Kevin Lyman even told Billboard that you guys are ready to take charge of the next generation of punk! Is that a scary thought? Are you guys excited to take over the scene soon?

Ian: We never really think about that. In a weird way we’re kind of selfish of what we produce. When we sit down to write, we never really think about where it’s going. We’re really in the moment. Recently, we thought about that looking back and it’s weird that people say that because it doesn’t feel like that to us. It’s just the same silly songs we’ve been writing since we were teenagers. Somehow it’s gotten out of control!

Ian: It’s a good thing! I can’t really specify a formula that got us to where we’re at, you know? It’s nice! It’s nice that people are saying that.

It’s all good stuff. Last year you guys released Eternity, In Your Arms and followed up with a Christmas EP just two months ago. What’s up next for you guys? Should we expect any new music soon?

Ian: We haven’t really gotten any plans at the moment. Like I said, we’ve sort of… when we’re there, we’re there! You know what I mean?

Are you guys writing or recording on the road?

Ian: No. It’s a strange one because when it comes to writing, we need to be in the right place and this year’s been so busy! Even the year before. We haven’t managed to get into the right mental space about writing. We’ll get there, maybe, I don’t know! We’ll see.

You guys are gearing up to open for All Time Low’s UK arena tour next month. What are your feelings on that? You’re touring in your homeland in some of the biggest places!

Ian: I couldn’t believe it! We went on tour with All Time Low in Europe and we had such a good time. We were like, “oh this is once in a lifetime!” Because they’re a huge band, aren’t they? We were like, “ah, let’s just make this last!” because we were having a good time and we get along really well with the guys. But then when we got back, they were like, “we should tour again!” We were like, “ok, yeah! That would be cool!” They were like, “oh by the way, we’re doing this arena tour….” And we were like, “OH…. OK! We need to start rethinking our set and buying more props for the stage!”

It’s gonna be a good one!

Will: It’s gonna be fun! It’s going to be the biggest tour we’ve ever done. The biggest indoor show we’ve played up until this point is like 5,000 people and this is like double that. Pretty exciting! Nerve-wracking too. We’re going to this venue in London, Alexandra Palace. Have you ever been?

No, but I’ve seen pictures and it’s really pretty!

Will: Ok, so, when I was a kid they used to do Taste of Chaos there. It was like this huge festival. I’d go see Funeral for a Friend, My Chemical Romance and all those bands would play there when I was a kid. It’s crazy to be playing in that same room!

Playing a rock show in a palace – it sounds pretty ideal. Anything else you guys would like to add for the fans?

Will: Thank you to everyone who’s come out on this Neck Deep run! We’ve met so many people. It’s weird, you forget how many people and times we’ve met people and they come out again!

Ian: Yeah, they all come out again. It’s weird, we’re so far away from home and that’s never really something you’d expect to happen. You have all of these interactions on Warped Tour and you think, “oh, that’s cool. We’re never going to see them again.” And you come back and they’re there!

It’s cool, you guys are building up your fanbase here. It’s awesome!

Will and Ian: Thanks!