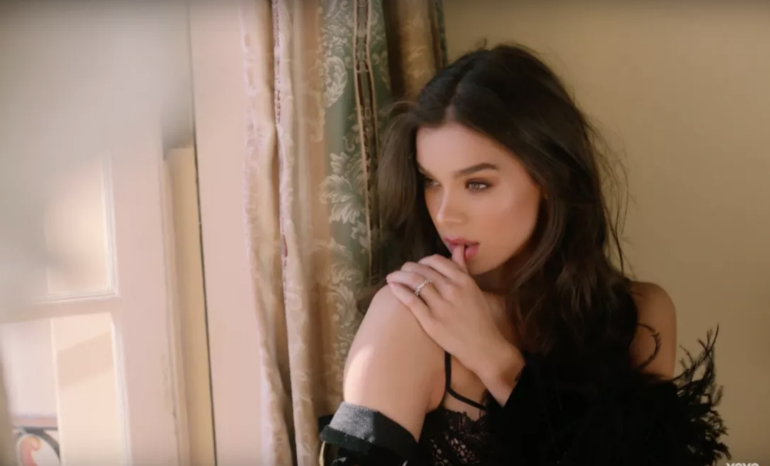 Hailee Steinfeld and Bloodpop® teamed up for a single from the Fifty Shades Freed soundtrack, “Capital Letters,” on January 12th, and the duo just released the official video for the song last week. The video boasts gorgeous cinematography with scenes of the Parisian skyline and the beaches and views of Monte Carlo. Directed by Hannah Lux Davis, known for creating thoughtful storylines and colorful scenery in many music videos, the video follows a young couple as they grow closer together in Paris and Monte Carlo.

Steinfeld and her love interest frolick on the beach together, roll around in a bedroom overlooking the Champs-Elysees in Paris and dine together with a spectacular view of the Mediterranean beach in Monte Carlo.  They even swim in the crisp, clear blue ocean waters and share a romantic moment in front of the Eiffel Tower.

Naturally, there are dozens of close-ups of Steinfeld. Whether she’s singing to the camera clad in an elegant, black dress or rocking out with her band behind her in an all-white ensemble, Steinfeld’s beauty is on full display.

The overall story of a couple traipsing through Paris and Monte Carlo does not get lost in the crossfires of Steinfeld’s close-ups.  The scenes blend well together and allow the viewer to get lost in the couple’s adventurous vacation and their rapidly growing feelings for one another.

While the song is infinitely about a woman singing her desire to have sex with her lover (as most Fifty Shades songs tend to revolve around the theme of sex), the video’s story is a more tasteful representation of a young couple experiencing a romantic getaway, which in turn, brings them closer together. The video never feels too sexual despite the lyrics that accompany it which say otherwise and the song is Steinfeld’s, 21, most grown-up offering in her career so far.

You can watch the video for “Capital Letters” here. Tweet us your thoughts @Soundigest or comment below!