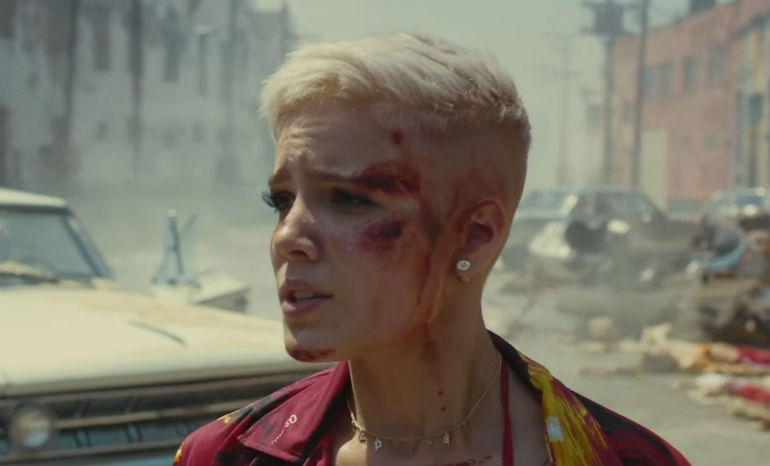 Halsey is back at it again showcasing her art in her latest music video for the song “Sorry.” Co-directed by Halsey herself, this video was shot in just one take. If it looks familiar to you, that’s because it is. This video is a direct follow up to her “Bad At Love” music video, which came out last year. Halsey told her fans on twitter that this was one of her favorite videos she has filmed yet.

“Sorry” is an emotional ballad from her latest album, Hopeless Fountain Kingdom. This song cuts deep into her past relationships and how she feels at fault for them not working out. Just like the main theme of this album, this song reflects on how she cannot begin to love another person until she works on loving herself first.

This video starts out with what appears to be a man dead from a horrific car accident, followed by a cut up and bloody Halsey. Nobody else is left alive but her. We then follow her through what is left of this town, which seemingly is nothing. She is the only survivor left and has to fight for herself; just like she has to fight to love herself on her own.

This showcases a horrific end to a love story that can be seen by watching her previous music videos for “Now or Never” and “Bad At Love.” “Now or Never” was made into a mini-film inspired by Romeo and Juliet and portrayed a love story between her character, Luna Aureum, and her lover, Solis Angelus.

We follow up this story with the “Bad At Love” video. Luna is all by herself this time and seems to be fleeing from her prior life. In an extended cut of the video we can also see Solis’ side of the story.

Halsey explained this love story even more in depth on twitter following the release of the video.

Sorry is a sort of fever dream. So many of Luna’s loved ones get killed at the tunnel in NoN fighting for her romance. She feels guilty / selfish and is reflecting on the people that lost their lives fighting in the name of Love.

It’s an apology to those who were victims of the violence. “hate can’t solve what it began” Luna and Solis were meant to fulfill a prophecy, but after the chaos, Luna wonders if she wants anything to do with the prophecy at all.

Love always feels like destiny till it goes terribly wrong, doesn’t it?

Check out the videos down below, and try not to be too heartbroken right before Valentines Day!