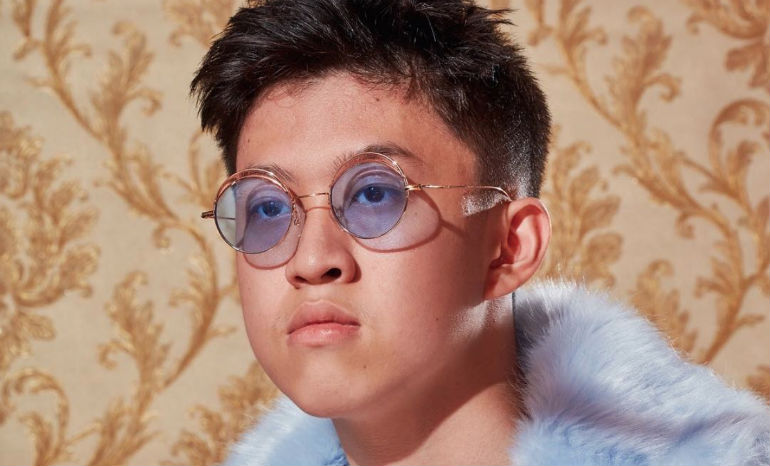 “Do the shit for the people that look like me//So the girls can see them when they think of me//And not that kid that throw that fit//’Cause he didn’t get straight A’s all week.”

These are the last lines of “Amen,” the first track on Rich Brian’s heavily autobiographical debut album of the same name. Hailing from Jakarta, Indonesia, 18-year-old Brian Imanuel was known for Twitter comedy and Vine memes before discovering hip-hop and blowing up in the music world.

Brian’s first taste of viral fame came in early 2016 with his music video for “Dat $tick,” which now has over 85 million views on Youtube. But it wasn’t just his rapping game that garnered attention from fellow rappers and the Internet masses. It was also that his deep voice and unapologetic lyrics seemed incongruous to his appearance.

Asians and Asian-Americans have long been classified as the model minority in the United States, but media company 88rising is changing the game, at least in the music industry. With the release of Amen, which features a handful of other artists from 88rising, Rich Brian became the first Asian artist to reach #1 on the iTunes Hip-Hop Charts. As his first album (although the artist prefers to refer to it as a project), Amen is Brian Imanuel’s way of introducing himself to the world, revealing his most personal thoughts, experiences, and realizations throughout his transition from a homeschooled kid in Jakarta to a rap sensation in America.

Amen starts off immediately with Rich Brian’s rapid-pace rapping, accompanied only by minimalist percussion and a crescendoing synth that disappears halfway through before quietly reappearing again. For those listening to Brian for the first time, it’s an excellent introduction not only to his unwavering approach to rap but also to his life story. In the title track, Brian acknowledges both his past (“Damn, homeschool felt like yesterday//I worked at my mom’s cafe”) as well as his new lifestyle (“I been rockin’ my own merch, I’m makin’ way more green than CeeLo”).

Despite the changes in culture and environment that Brian Imanuel has undergone, he hasn’t forgotten where he came from. In “Amen,” there’s a hint of resentment in the verse “People think I’m Dory, I’m forgettin’ ’bout my hood//Man should I be sorry for just doin’ somethin’ new.” Still, he repeatedly reassures his audience of his loyalty to Indonesia by including references to his home country throughout the album.

Considering his experiences growing up in Indonesia and recently uprooting to make it in the States, Rich Brian offers a unique perspective not often seen in hip-hop. While many rappers tell stories of their past in their music, Brian is writing his songs as he’s going through pivotal moments in his life, revealing his thoughts in the midst of these transformative experiences.

Brian’s journey moving from Jakarta to LA is depicted in “Flight,” from meeting his manager Sean Miyashiro, the founder of 88rising, to feeling starstruck while working with hitmaker Pharrell. What makes this track stand out is its optimism, featuring high, clear instrumentals instead of the low, dark tones underlying most of the other songs.

In contrast to “Flight”, “Attention (ft. Offset)” is definitively more somber, beginning with and maintaining an ominously ringing bell as the melodic backbeat. While Rich Brian embraces his newfound popularity (“Pull a mil’ and that day ain’t even have a goddamn deal”), he extends a menacing threat to anyone who gets in his way (“I got people locked and loaded like they trained for ISIS”).

While fame has afforded Brian with numerous opportunities, it also has its downsides, and he tackles these negative consequences of fame in several of his tracks. In “Tresspass” and “Enemies,” Brian talks about the effect this new lifestyle has had on his relationships, brushing off people who only attempt to reconnect him now that he’s famous and questioning whether his friends are fake or real.

Being “lonely at the top” is a topic that has been addressed by musicians throughout the ages, from Mick Jagger to Bon Jovi, and it’s a prevalent theme in Rich Brian’s Amen. As a kid who plunged into the music business so suddenly and achieved nearly overnight fame, he’s had to deal with changes at an even greater scale.

In the self-produced track “See Me”, Brian reveals that while he doesn’t regret how far he’s come and will continue to chase after his goals, he discovers that the lifestyle of a celebrity is a lonely one. The line “Twenty mirrors in my crib, I’m hangin’ with my friends” in “See Me” particularly tugs at the heartstrings. “Introvert (ft. Joji)” is another track where Brian bares his heart and soul. In the distinctly haunting, faraway style of lo-fi producer Joji, the song contains verses like “Yeah, hole in my soul, don’t know how to fill it up//Cannot let nobody in, hopin’ that they understand.”

As a lyricist, Brian is particularly adept at exuding the swaggering braggadocio common among rappers while still retaining the vulnerability and authenticity that draws people to his music. True to his Internet roots, he infuses humor in some of his songs, like with the comical anecdote of how he lost his virginity in the euphemistically titled track “Kitty”, and in the ending of “Arizona (ft. AUGUST 08)” where he earnestly tells his manager about a fake episode of The Office. Like any human being, Brian is prone to making mistakes, but he acknowledges and learns from them, with one example being his name change from “Rich Chigga” to “Rich Brian”. As the rapper says in “Amen,” “I’m still learnin’, I’m still fuckin’ up, correct me if I’m wrong”.

Brian has shown that he will remain true to himself, whether that means not partaking in drugs (“I don’t take drugs, I just take naps”), embracing his Indonesian heritage (“Reppin’ red and white so hard I barely can control it”), or breaking stereotypes (“Try to put me in a box, I’m gon’ always break the lock”).

Amen includes the old favorite, “Glow Like Dat”, released back in August 2017, but it’s the new tracks on the album that give us a picture of who Brian Imanuel really is. There’s a touch of playfulness, a bit of boasting, and a great deal of insight into what it’s like for someone to realize their dreams.

Listen to Amen on Spotify and iTunes.