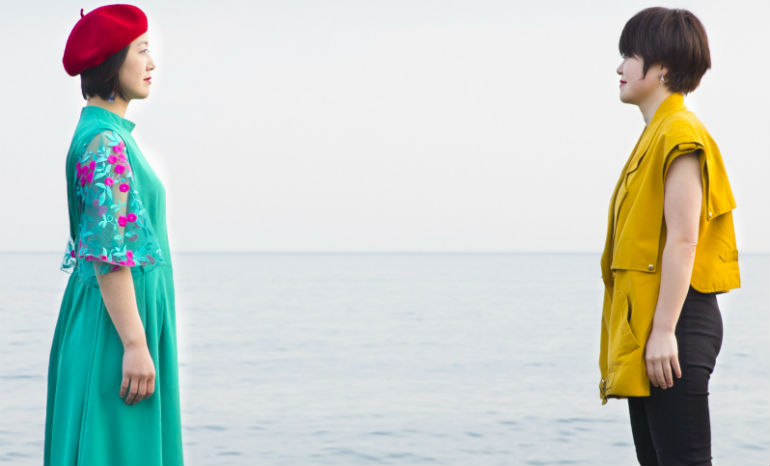 The Suzan, an indie-pop sister duo band who have been working together since 2004, just released their new EP Konichiwa. Collectively, their music has been stylized as rock, punk, indie-pop, and incorporates music from other genres, such as dance, surf, jazz, and soul. Konichiwa is a 3-track EP consisting of the new single, “A Song for You,” and two other songs, “Desire,” and “Tokyo.” Both “A Song For You” and “Tokyo” are brilliantly upbeat, funky, toe-tapping tunes that got stuck in my head after the first listen.

Particularly, “A Song For You” has an infectious melody with drums, guitar, tambourine and a xylophone beat. It’s been a while since I’ve heard a tambourine and a xylophone in a pop song, and it works so well here. The tune itself reminds me of a more Japanese-style of music that’s missing in American pop. The lyrics are fun and flirty, with the chorus being, “I made a song for you” and the song is clearly an ode to a crush.

“Desire” is a slower-paced song with a melody of bongo drums and hauntingly beautiful vocals from The Suzan. A lot of “ohs” and “doo doo doo’s.” The sisters describe feeling “free and good.” This, in my opinion, would be a good song to meditate to and it’s a perfect fit for the 2nd track of the EP, offering a stark contrast to “A Song For You.”

“Tokyo” shares a similar melodic structure to “A Song For You.” It’s upbeat, fun, and the polar opposite of “Desire.” Going out on a high note, The Suzan sing the chorus of “Tokyo, Tokyo, Tokyo-oh oh, oh oh” accompanied by a melody of an electric guitar and tambourine. The bridge of the song adds a piano and traditional drumbeat.

We had the chance to chat with The Suzan all about Konichiwa, what the music process has been like for them over the many years of their career, and what they like to do for fun outside of the band! Check out our interview below:

You just released your new EP, “Konichiwa.” Congratulations! Tell us about the 3 tracks and what they mean to you.

Saori : Thank you! “A Song for You” is written by Rie. I think it’s a really lovely song. She wrote this song for her dog, not for a person. I wrote “Desire” and “Tokyo”, I wanted to mix a pop melody with big sounding choruses over a slow tempo to create something new. Tokyo is about our hometown. Everybody sometimes misses their hometown when they live in another big city. We wish that this song brings some hope to the people who are having a tough time in big city like NYC, there will be a better time ahead.

How do these three songs differ from some of your older work, such as “Animal” and “Tell Me What?”

Rie and Saori, you two are sisters and you’ve been a band for over ten years now. How has the amount of time you’ve spent together influenced your music over the years? Do you find that being siblings makes it easier to work together?

Rie : We know each other very well, such as character and musical taste. It does boost the efficiency of song writing for sure.

When you come up with an idea for a new song, do you work together on the lyrics and music? Which typically comes easier – the melody or the lyrics?

Rie : Music comes first. I usually get a fully completed song with instrumentation playing in my head, then I struggle to fit lyrics in.

“A Song For You,” the first song on the new EP, has a funky, upbeat melody that made me want to dance when I listened to it. I thought it was a great standout track and wondered if it was a purposeful decision to place it as the first song on the EP to reel the listener in. When choosing a tracklist for your EPs and albums, do you try to tell a story with the order of the songs, or is it more random?

Saori : We pretty much leave the order of the songs to our producer, Bjorn and the label. He thought that the EP had to start with “A Song for You”.

Many different elements from multiple genres of music appear in your songs, which I personally love. That being said, how would you describe your music to someone who had never heard of The Suzan before?

Rie : There are two people writing songs, so naturally there are at least two different characters in our music. I do not start writing a song which caters a particular style. Writing a song is like scooping some musical ideas dropped from somewhere. It is like difference between “I cooked pasta for dinner because I wanted to eat it (I bought additional ingredients)” and “I cooked pasta for dinner because there were enough ingredients in the kitchen for the recipe.” To be honest, I have no idea how we can create such a diverse musical styles.

You have had the opportunity to work on a major record label (Fool’s Gold Records), create your own label (Poco Poco Beat), and have now teamed up with another label to release Konichiwa on, INGRID. What are some of the advantages of working on a major label versus your own? Do you find that working with a major label is easier or harder than working under your own label?

Rie : It is great to work with a label which understands our music at a particular point of time. The ways of thinking and working styles differ from country to country. It might take a while to understand each other, but it leads to building up my experience and expanding our field. There are no shortcomings to this process.

When you’re not making music together, what do you both like to do for fun?

Rie : Saori and I both have our own projects going at any given time. We love visual art, so we held an art and music event at a gallery in Tokyo just a few weeks ago.

Do you have any upcoming tours or shows that fans can keep an eye out for?

Rie : We have two shows coming up. This year we will stay in Japan.

Rie : I hope our music makes people’s day-to-day lives happier. If they love this EP, it would be just fantastic.

Saori : Please watch the music video of “Desire”, you will find it surreal and interesting.

Featured Image: Courtesy of The Suzan