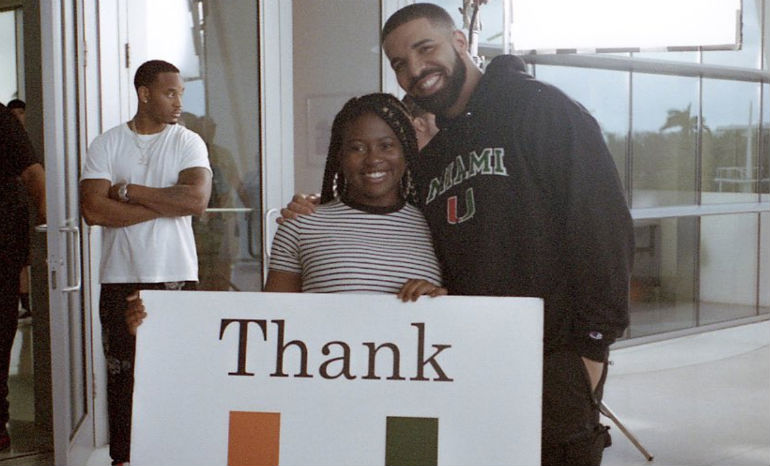 Drake’s video for his hit song, “God’s Plan,” is out now and is one of his best videos to date.  Drake was spotted in Miami, Florida during filming of the video and some did know exactly what he was doing. With the video’s release out now, we get to see what he was really up to during filming. The song even went on the break some crazy records already!

The video opens with a note saying that Drake was given a budget of $996,631.90 to make it. Rather than taking that money and creating a flashy, blockbuster style video, they gave it all away. Drake took nearly one million dollars and gave every last cent of it away to students and families. Miami’s nickname is The Magic City, but Drake definitely makes it more magical.

Drake is seen giving toys to children, paying for everyone’s bill in a grocery store, giving away cars, handing out wads of cash to people while strolling the streets, and giving tens of thousands of dollars away in donations to high schools, fire departments, and other local programs. He also surprised a student at University of Miami with a $50,000 scholarship.

Seeing the reactions of everyone is the best part of the video. Everyone was so grateful for what he was doing and it is quite clear that Drake was not just doing this for the cameras. Drake’s desire to give back shines through the video. When Drake is at the high school and dancing and rapping with the students, we can only imagine how mad everyone who skipped school that day was.

The ending with Drake talking to the individuals he gave money to hits you with all of the feels. That is something that Drake certainly specializes in. The lyric “They wishin’ on me,” embodies the entire premise of the video. Drake’s altruism goes to show that there is still a lot of good in the world. We need more people like Drake!

Watch the video below and let us know your thoughts in the comments or on Twitter @Soundigest !