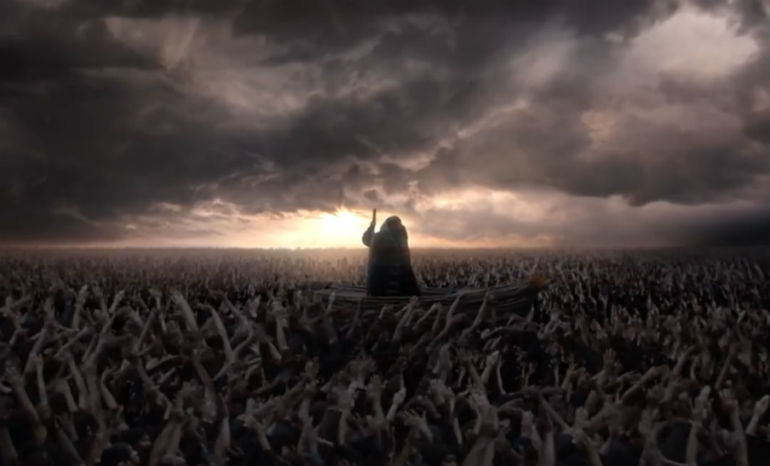 Uh oh! The team behind the creation of the “All The Stars” music video on the latest Black Panther soundtrack are being sued. Allegedly, the team knowingly committed copyright infringement by using works from British-Libertarian Artist Lina Iris Viktor.

According to the New York Times, Lina Iris Viktor’s lawyer, Christopher Robinson, sent a letter to Anthony Tiffith at Top Dawg Entertainment, who is Kendrick Lamar‘s mentor. The message states that the team committed a copyright violation of the 24-karat gold, patterned artworks in Viktor’s series of paintings titled “Constellations.” The artwork appears around the three-minute mark in the video.

The letter also said that Viktor had been contacted several times earlier by the film’s creators. They asked for permission to feature her works. However, she decided not to participate.

The Black Panther soundtrack and film displays themes of feminism and black empowerment. According to Pitchfork, the complaint says, “…in a bitter irony, the Defendants have ignored the wishes of the Artist, herself a Black African woman, whose life’s work is founded on an examination of the political and historical preconceptions of “blackness,” liberation and womanhood.”

Thank you to everyone for the overwhelming support and messages over the past week. I apologize for not being able to respond to each person, but know that I have read and truly appreciate your powerful words of encouragement. Feel reassured – I am seeking justice. Back to what was scheduled prior to this disruption – I have been in the studio for the past few months focusing on my upcoming exhibition at The Armory Show with Mariane Ibrahim Gallery. I am very excited to share my new work and reveal the installation we have in store. There will be updates via @marianeibrahimgallery this coming week. @thearmoryshow March 8 – 11, 2018 New York

The entire Black Panther franchise is taking the world by storm as a cultural phenomena. The soundtrack has maintained the number one spot on Billboard‘s top 200 for two weeks. The film has also garnered huge box office success in it’s first week in theaters. It will be interesting to see how this lawsuit may impact the franchise and it’s future success.