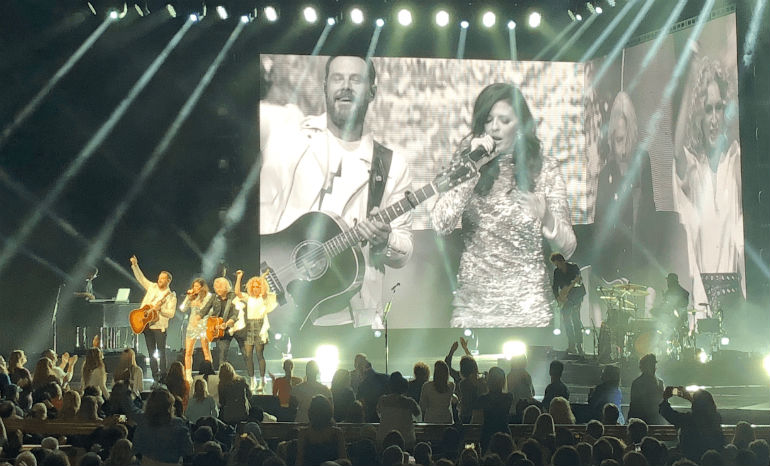 This past Saturday, February 24th, I had the opportunity to see the legendary Little Big Town live at the sold out Radio City Music Hall in NYC! Currently on The Breakers Tour, Little Big Town definitely knows a thing or two about performing. Having been a band for over 20 years, it came as no surprise that the four members, Karen Fairchild, Kimberly Schlapman, Jimi Westbrook, and Phillip Sweet, were beyond incredible on stage. And, with opening acts like Midland and Kacey Musgraves, it was, for sure, a night I will never forget.

The show opened up with GRAMMY nominated Midland, an up-and-coming country group from Texas. The group’s sound, along with their sense of style, was one out of an ’80s retro music video. Midland was a great time to watch, entertaining the crowd with their nontraditional country twang. They ended their set with what is probably their best known song, “Drinkin’ Problem,” which brought the whole crowd to their feet, singing and swaying along.

Next up was Kacey Musgraves, whose sparkly jumpsuit could catch someone’s eye from a mile away. Musgraves has to be one of my favorite people in country music and I was so thrilled to see her open for LBT, as she just released two new singles. She performed “Space Cowboy” and “Butterflies,” which will both be featured on Golden Hour, her new album, coming out March 30th. Musgraves style is one that’s so different than anything going on in country music right now. Both of these songs were beautiful and made me so excited to see what’s in store for the rest of the album!

After the two brilliant openers, it was finally time for the main event- Little Big Town! Before even diving into the setlist of the show, it is so important to point out just how incredible the four members are, and together, they shine on stage. There’s no main vocalist, so they’re each given the opportunity to play an equal role in the performance. Also, their voices blend together so incredibly, making their harmonies out of this world. With covers like Elton John’s “Rocket Man” and Glen Campbell’s “Wichita Lineman”, to some of LBT’s biggest hits like “Pontoon” and “Better Man,” the setlist was diverse and kept the audience’s attention throughout the show. With an encore of “Girl Crush” and “Boondocks,” the show sadly came to an end, but one thing I know for sure is, with a performance like that, that will not be the last time I see Little Big Town in concert.