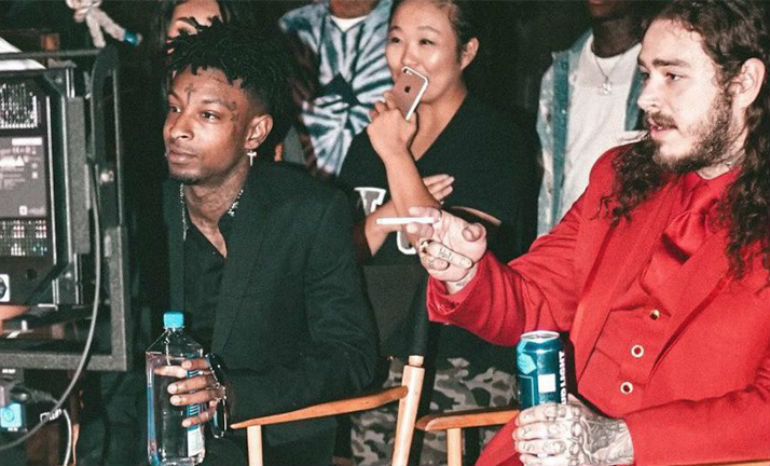 Post Malone and 21 Savage, the rappers behind the smash hit “Rockstar”, are teaming up again. The two are going to be co-headlining a tour together starting on April 26th. The tour kicks off in Portland and ends two months later in San Francisco on June 24th. Post Malone had a huge 2017 with three of his singles reaching top 20 on the Billboard Hot 100. His most popular songs from last year were “I Fall Apart”, which reached #16 on the charts, “Congratulations” at #8, and “Rockstar” getting all the way up to #1.

21 Savage had a big year as well by dropping two albums, Issa Album and Without Warning, a collaborative album with Migos‘ Offset and producer Metro Boomin. He also had a song reach top 20 on the Billboard Top 100 with “Bank Account” getting as high as #12. The duo will have SOBxRBE and Paris joining them as opening acts. SOBxRBE is a rap group that has been making waves in the music scene and even have a song included on the Black Panther: The Album. Paris is a producer who has collaborated with Post Malone before.

While 21 Savage is a headlining the tour, it seems generally more focused on Post Malone. Every pair of tickets bought comes with a physical CD of Post Malone’s upcoming album, Beerbongs and Bentleys. With the tour only a few months away, being slated to perform at Coachella, and his album seemingly being released around the same time, Post Malone is set to have another huge year for himself. He is one of the hottest rappers in the music industry right now and every single song he releases seems like an instant hit. Speaking of hits, he recently dropped a new song called “Psycho” with Ty Dolla $ign. Take a listen for yourself and see what you think of it but, to us, it’s on the same level as “Rockstar” and will get heavy radio play:

You can check out tour dates HERE: