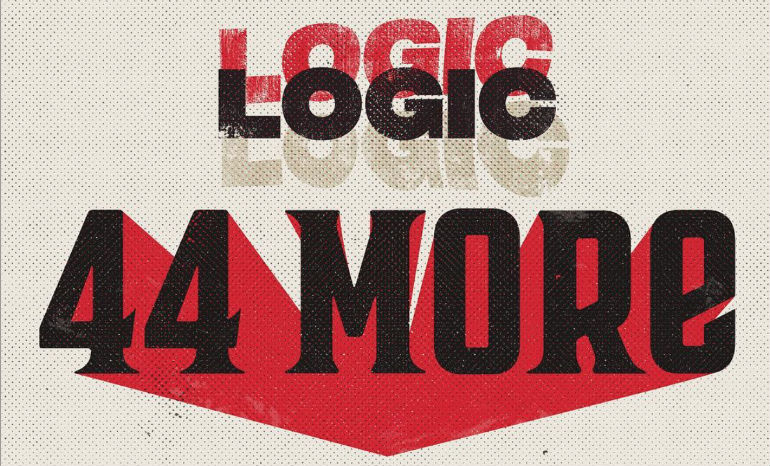 About a week ago, Logic spontaneously decided to drop his first single of 2018, titled “44 More.” After all of the success that came with his previous album, Everybody, which was released last May, the Ratt Pack has been anxiously wondering what’s next for Logic. Finally, after all of the excitement of his Grammy nomination, Logic just let everyone know that he’s back on his grind with this new track produced by 6ix and !llmind.

On “44 More,” Logic discusses issues regarding family conflict and haters in the industry, all while boasting about where he currently stands in the rap game. The title “44 More” is actually a reference to “44 Bars,” a track from Logic’s 2016 Mixtape, Bobby Tarantino. Both of these songs feature precisely 44 bars, hence their corresponding titles. In fact, “44 Bars” is a prequel to the newer release, “44 More.” “44 Bars” is an emotional track where Logic dives deep into how society, the media, and politics have an overwhelming effect on his mentality. As a celebrity, Logic feels a lot of pressure to be perfect in regards to his actions and overall public appearance. However, in the new single, Logic sheds a new light on this situation. In the song, the rapper justifies his success to everyone who has ever doubted him. He spits the objective facts, and even compares his success to other mainstream artists. In fact, in the song he says, “sold more albums my first week than Harry Styles and Katy Perry//If that ain’t a sign of the times, then I don’t know what is, man this sh*t is scary.” Here, he is acknowledging that his craft allowed him to sell more albums than bigger names in the industry. Haters can’t deny that he’s just as successful as he is hard working!

In the new single, Logic also makes an effort to expose the deceiving lifestyle that many up-and-coming artists expect to live after they’ve “made it.” Logic is known for being authentic when it comes to his image as a celebrity, especially on social media. He stays grounded and doesn’t try to put on a facade in order to gain fame or wealth. He’s not afraid to express vulnerability, which is why his genuine character attracts so many fans of different demographics and backgrounds.

On this track, Logic exposes a darker side of the industry as he calls out other rappers who take their financial success for granted. In one verse he says, “You in the club throwin’ dollars, but I’m saving mine so my kids go to college//Or maybe whatever they want to do//just as long as they never say, ‘Daddy blew 20 million dollars, he had to flex to be acknowledged.”

Logic makes a great role model because shows everyone that he has his priorities set straight. He wants the world to know that it’s possible to make a successful living off of rap music without blowing it on superficial things (like strip clubs and partying). He plans to use his wealth to support his biggest priority, which is his family.

Just when you think Logic’s return couldn’t get any better, he also released a behind the scenes video on the making of “44 More.” Logic’s decision to upload this video was very important because it shows all of his hard work over the past several of months. He claimed that he recorded this song while on the road for the Everybody’s Tour,” which took place in the summer of 2017. The video shows raw footage of Logic practicing verse after verse and struggling with his own lyrics. Overall, the video candidly shows that he’s constantly pushing his limits to be great for his fans.