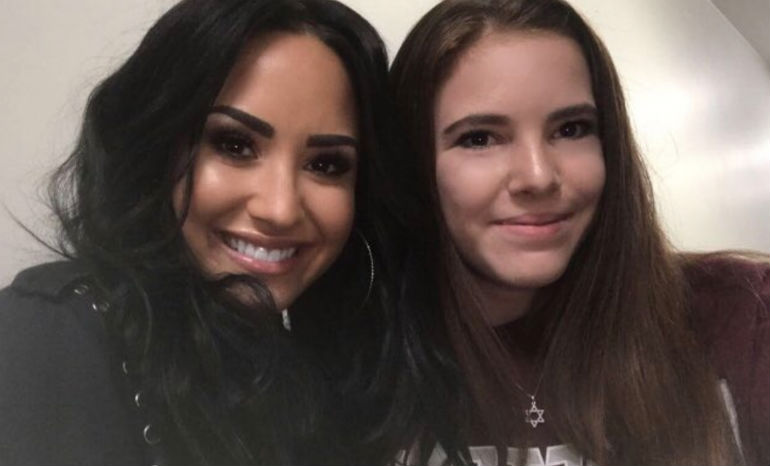 Demi Lovato’s “Tell Me You Love Me” tour kicked off this past week in San Diego, CA at Viejas Arena. Demi is no stranger when it comes to raising awareness for mental health. Before each one of her shows, fans have the opportunity to attend a mental health workshop called “CAST,” which was founded by Demi’s own mental health coach Mike Bayer.

For her opening night, Demi flew out Julius Castillo, Mackenzie Marie Chapman, Samantha Megan Deitsch, Maia Hebron, Eden Hebron and Sarah Stricker; all students who were survivors of last month’s Parkland, Florida school shooting. They had the opportunity to attend the CAST workshop prior to the show, as well as a chance to meet and talk with Demi, who showed them nothing but support.

Sam Deitsh, a freshman from Marjory Stoneman Douglas High School, posted on her twitter that she was in so much shock that she was on her way to meet her childhood idol, because if it were any normal day she would be on her way to school. She also shared an adorable picture alongside Demi, with Demi holding up a ‘MSDHS Strong’ t-shirt.

currently on a private jet thanks to @ddlovato and get to meet my childhood idol which is crazy because if it was any normal week i’d be getting ready for school tomorrow. Can’t wait to be back at school but i can’t wait even more to meet demi!❤️

still in shock! thank you so much for everything @ddlovato you and your team are so sweet and supportive❤️ pic.twitter.com/td1a69nO7V

During the show, Lovato brought the students out on stage with her for her performance of “Warrior.” During the song, resources were displayed on the screen behind her to show fans how they could donate to CAST, which in return would be going to help and support the students of Parkland. Being such an advocate for mental health, Demi said, “I want to make sure their voices are being heard and we can provide them with the mental health and post trauma care they need.”

Fans will be able to donate to CAST for the duration of the tour. An official GoFundMe has also been made and has been tweeted out by the Broward Sheriff’s office, which can be found here.