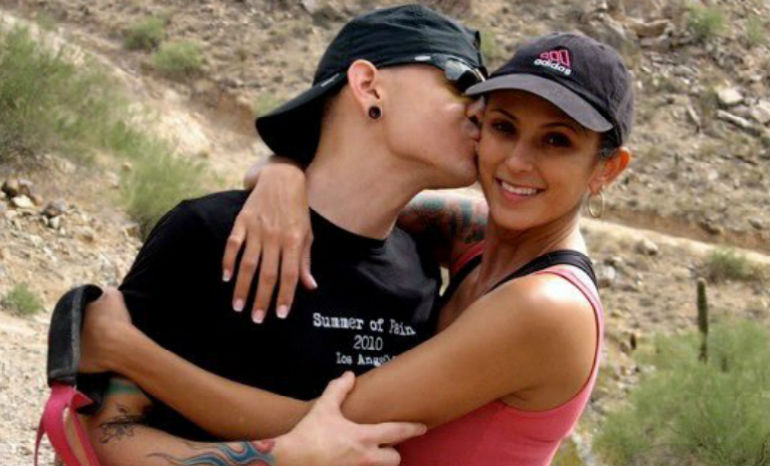 Since the suicide of Linkin Park singer, Chester Bennington, his wife Talinda Bennington has begun to campaign vigorously in order to help individuals who may be struggling with similar issues of mental illness and addiction. Last week, Talinda sent out a tweet asking fans of her husband to honor his upcoming birthday by posting pictures of their hands held out with, “I am the change,” written on them. She stated that holding out one’s hand in the photo is symbolic of knowing the five signs of emotional well-being.

Nothing will ever stop me. With all of your help, love, and support, @chesterbe will not have died in vain. #320changesdirection #MakeChesterProud #timeforchange

The signs of emotional well-being and the initiative for mental health awareness are all facets of Bennington’s campaign 320 Changes Direction, which she started after Chester’s death. Part of the purpose of this initiative is to provide resources for the families and friends of individuals struggling with mental illness.

In a statement on the campaign’s website, Bennington wrote, “For 13 years I watched my husband Chester struggle with depression and substance use. I often felt scared and alone. I was uneducated about the challenges he faced and I wanted information.”

To honor @ChesterBe Bday-I’m asking you to Change Direction. On March 20th,Post a pic holding up your hand 🤚, which symbolizes you know the 5 signs of emotional well-being. Write “I AM THE CHANGE” on your hand. Bcuz the change begins within ourselves https://t.co/bZ2yDAq3y1

Talinda goes on to describe the two-pronged approach of this campaign in relation to existing programs in the field of mental health counseling, “We don’t need to create more programs – there are good ones out there. But we do need to do two things. We need to streamline access to the help that IS available. And we need to change the culture of mental health so that those in need – and their family members – are able to speak openly about their struggles so that they can seek the care they deserve.”

Chester would have been turning 42 this coming March 20th.

Links to resources for mental health services are available on the 320 Changes Direction website. Anonymous, free crisis counseling is also available over text, by messaging SIGNS to 741741.