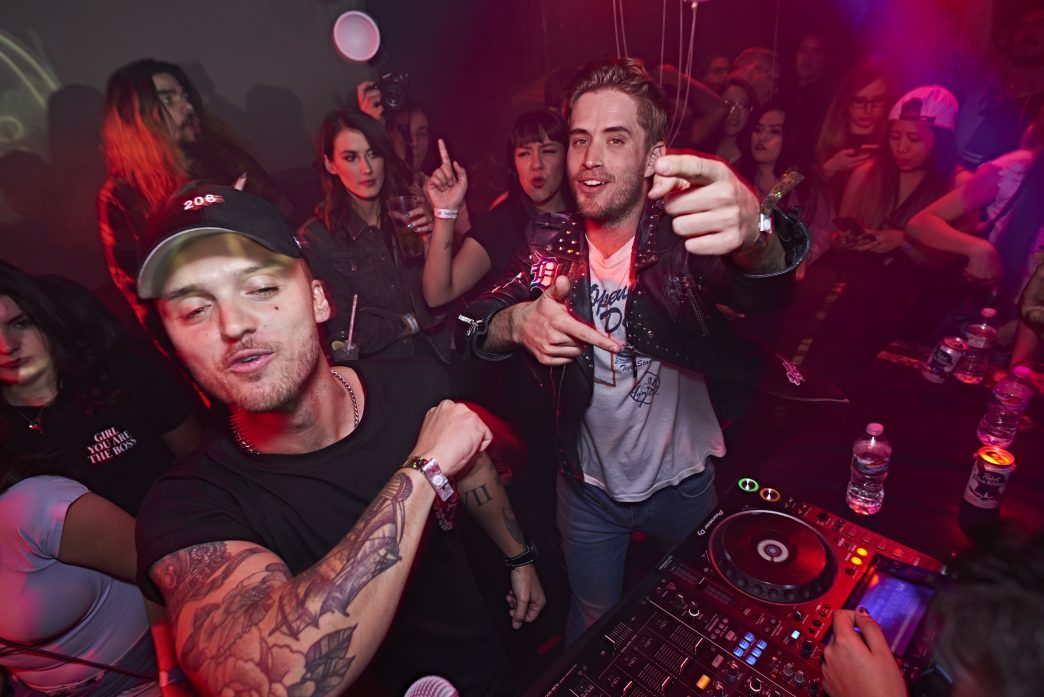 On the first Tuesday of every month in Los Angeles you can find former emo kids – now adults lining up down the street in Echo Park to attend Emo Nite LA. This event has been going on for over three years now and has become a successful hit after starting out in a dive bar and is now taking over The Echoplex and Echo. At the event, they play music that ranges from the 90’s, 2000’s, and today, bringing fans together for their love emo and pop-punk music.

We had the chance to attend this past Emo Nite and it sure was a night that we will never forget. It all started out by entering downstairs at The Echoplex. The DJ’s were playing an unlikely choice, yet crowd favorite, “God’s Plan” by Drake, to get the night started. After the crowd had settled in, grabbed a drink and bought some of their favorite Emo Nite merch, they started playing Fall Out Boy’s “Sugar We’re Going Down.”

The crowd cheered in excitement and everyone started singing along as loud as they possibly could. The energy in the room was next level and you just couldn’t help but feel like nothing else mattered at that moment. Other big hits of the night were Taking Back Sunday’s “MakeDamnSure,” Panic! At The Disco’s “But It’s Better If You Do,” and Brand New’s “Deja Entendu.” Then, guest DJ’s Alex DeLeon (formerly of The Cab; now goes by Bohnes) and Brian Logan Dales (formerly of The Summer Set) showed up. They played everyone’s favorite songs, with one of the highlights being The Starting Line’s “Best of Me.”

While that was going on below, upstairs at the Echo there was more excitement to be had with live performances by Cheridomingo, SLEEPLUST, CVBZ and a Teenage Wrist listening party up on the patio to complete it all.

As the night went on there were talks about who the surprise guest would be after it was so hyped up. At 11pm, Hawthorne Heights took the Echoplex stage as a full band and played a small setlist with the hits “Niki FM” and “Ohio Is For Lovers.”

No one thought the night could get any better after that, but everyone was shocked to see the stage was being reset around midnight and a piano was brought out. Moments later, Andrew McMahon came out and the crowd went absolutely insane. He played a four-song set on the piano that included Something Corporate’s “Punk Rock Princess” and “I Woke Up In A Car.” He also played Jack’s Mannequin’s “The Mixed Tape” and ended his set with “Dark Blue.” He paused during his set and talked about being the kid that played the piano and never felt a sense of belonging, but then went on to say that “When you’re in a room like this, you feel like you belong.”

Overall, Emo Nite was filled with so many nostalgic hits with unforgettable live performances. If you don’t live in LA you can catch the party on tour at a city near you, and it’s definitely not an event you want to miss out on.